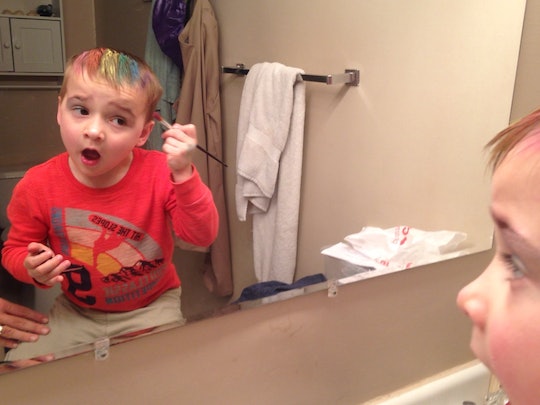 I Put Unicorn Makeup On My 4-Year-Old Sons

For a creature that doesn't actually exist, unicorns are impossible to avoid right now. From the patterned leggings you pull on in the morning to the frappuccino you grab during your mid-afternoon Starbucks run, it's possible to spend your entire day surrounded by unicorns. I love how the trend lets me embrace my inner child, but my children are even more thrilled with the unicorn craze than I am.

My 4-year-old boys Remy and Lolo threw the mother of all meltdowns when I refused to let them get unicorn bike helmets a few weeks ago (not because I care about gender roles and having my boys wear pink or glitter, but because I didn't feel the horn would be a bonus in the event they took a tumble). And ever since they saw the tutorial while peering over my shoulder, they've been obsessed with 5-year-old Charli Rose's unicorn makeup tutorial.

"Mommy, MOMMY, MOM can we do unicorn makeup?" they plead every morning when I pull out my makeup bag. For days, I've been telling them no, because I'm still mourning the loss of the eyeshadow palette they ruined when I let them try Elsa-inspired looks. But when I walked into the bathroom this morning and found Lolo perched on the edge of the sink smearing highlighter on his nose, I admitted defeat.

I decided to let my sons live out their rainbow makeup dreams for a day and record people's reactions. Would people think our family was totally strange, or that we just got back from Coachella? Would little boys in makeup be frowned upon by my New England town? Here's what happened.

Lesson 1: Kids have the best eyelashes.

I went through my makeup bag and pulled out everything bright and sparkly. There were periods in the early 2010s when my sister made fun of me for holding on to my body glitter left over from high school, but who's laughing now, sis? I'm both proud and ashamed to admit that as a 30-something-year-old mom, I already owned everything I needed to create a unicorn look.

I had a sermon prepped and ready to go in my head if anyone dared to say "boys shouldn't wear makeup" to me.

Some cray-pas, glitter from Makeup Forever, and an obscene amount of Benefit's Watt's Up cream highlighter later, I had my own mini-herd of unicorns. I wanted to make everything look Insta levels of perfect, but the boys really wanted to do the makeup themselves like Charli Rose does in her video, so I decided to give up on perfection for the sake of letting them be creative. They've watched male makeup artist Manny MUA's videos with me before, so they know that boys can wear makeup if they want to, but they seemed to approach their unicorn transformations more like putting on a Halloween costume than mastering a cut crease.

We set out for the grocery store, trailing glitter the whole way there. I was a little nervous about how people would react to seeing my kids in unicorn makeup. I didn't want to hear any comments about how the chemicals aren't good for their skin, and I had a sermon prepped and ready to go in my head if anyone dared to say "boys shouldn't wear makeup" to me.

One older gentleman shook his head at me when we walked by, and another snorted.

Surprisingly, no one in the store seemed shaken by a shopping cart filled with grapes and glittery little boys. The few people in the store who seemed to notice at all smiled at the kids, and one woman told my son she loved his rainbow hair. One of the cashiers my kids love was on duty, and she noticed their new looks right away. Pleased with the attention, my little unicorns pranced out of the store.

Lesson #3: Kids are annoying to some people, with or without makeup

Our next stop was the library, where the reaction to the boys' bold looks was very different. While the children's librarian told me it was "so fun" to let them adorn themselves, the patrons were another story.

You have to walk by part of the adult library to get to the children's area. One older gentleman shook his head at me when we walked by, and another snorted. I think one woman tried to look like she wasn't shocked to see two little boys in unicorn makeup, but the way her eyebrows shot to her hairline gave her away.

The boys stopped in every single store window to gaze upon their reflections and tell me how pretty and sparkly they looked. I loved seeing them so confident and comfortable in their own skin.

To be fair, my kids were talking louder than a whisper (even though I kept reminding them to lower their voices), so that could have been the source of their annoyance rather than the makeup. But it was not lost on me that older men seemed to be less enthused with my boys' looks than anyone else. I sometimes feel the older generation has a harder time accepting concepts like gender fluidity, and this only reaffirmed that belief.

Things were different in the children's playroom. The boys were treated like rock royalty, with many of the kids reaching out to touch their faces or to ask their parents if they could wear unicorn makeup.

From the back, you couldn't see Remy's makeup, so he got a kick out of facing the wall whenever a new kid came into the playroom and then turning around for a big "reveal." That's what I get for letting him watch What Not To Wear with me.

Lesson #4: For the most part, people are here for kids expressing themselves.

We headed for a walk on the town green to check out a school art display. Our progress was painfully slow. The boys stopped in every single store window to gaze upon their reflections and tell me how pretty and sparkly they looked.

I loved seeing them so confident and comfortable in their own skin, especially Lolo, who can be a little on the shy side. The entire day they were outgoing and bubbly, eager to show off their look. I want them to always feel this way, so if that means letting them ransack my eyeshadow on a regular basis, so be it.

Using makeup as an escape from your everyday routine shouldn't be exclusive to girls.

When we ran into other moms, even ones I didn't know, they complimented both my own unicorn-inspired braid and the boys' makeup and asked me how I created the looks. I was happy and relieved that no one thought it was inappropriate or strange to see boys in makeup. I wonder if that's just a sign of our society becoming more accepting, or maybe it's because my kids are so young that sexuality isn't really on the table yet. Would the reaction be the same if they were 14 instead of 4?

I'll admit that I wasn't too crazy about letting my kids wear unicorn makeup at first. I was worried that people would take issue with seeing boys in makeup and make assumptions about their gender identity or sexuality as a result.

But once we started putting the makeup on, I was sucked into how fun this was. It's really freeing to look at makeup purely as a form of creative expression, rather than as a way to make yourself look "beautiful" or young as I usually do. Unicorn makeup is pure pleasure. You're not thinking about whether your under-eye circles are showing, or if you have visible pores. Maybe this is why we're all so obsessed with unicorns right now: Between what's happening at the White House and the unrest in foreign countries, it feels good to let yourself escape for a bit. Using makeup as an escape from your everyday routine shouldn't be exclusive to girls.

Turns out, unicorns really are magical.