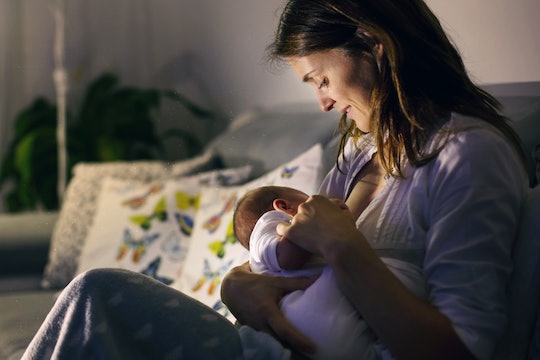 Sorry, But I Refuse To Apologize For Always Talking About Breastfeeding

It's not that I'm vehemently committed to the idea that all babies must be breastfed or anything like that. Personally, I really don't care how a child is fed as long as they are fed sufficiently and in a way that works for the people feeding them. And it's not like I'm clinging onto my glory days of nursing. Yes, I really did enjoy it, but believe me when I say when I was done I was f*cking done. So I'm not wistful about days gone by or anything like that, but there are lots of reasons breastfeeding remains important to me.

For starters, it's a health issue... and one that is often overlooked. Breastfeeding is a very basic function of most bodies that give birth (which, incidentally, means it pertains mostly to women's bodies). We pop out a baby and then we start lactating. It's a miracle of biology and a perfect food for infant humans. It's how we've fed our young for tens of thousands of years. Milk: it does a species good!

And yet, here in America, new parents are not being given the time or support they need to successfully meet their breastfeeding goals. While most new mothers will breastfeed at some point, less than a quarter of them will continue to exclusively breastfeed through six months (the current American Academy of Pediatrics recommendation) and only about 35 percent will continue to breastfeed to the recommended one year. And, certainly, not all moms wish to breastfeed to a year or even at all, and that's completely fine (formula is an awesome, nutritionally complete alternative to human milk). But the fact that there's a pretty enormous drop between breastfeeding at birth and three months — from 83 to just under 47 percent — suggests that stopping breastfeeding isn't really about anyone's choice so much as it's about the fact that, for whatever reason, it wasn't working out.

Until women have the support they need and deserve I will continue to talk about breastfeeding ad nauseam.

And certainly there are situations where everyone — from lactation consultants to employers to partners to family members — put in a good effort so a breastfeeding mom is as supported as possible and still she doesn't meet the breastfeeding goals she originally set for herself and her baby. Exact numbers are hard to come up with, but experts generally agree that at least 1 to 5 percent of women can't breastfeed; this does not account for a 36 percent drop from birth to three months, either (which just so happens to synch up with the time most new moms are back at work after maternity leave).

So while I'm all for women choosing what's best for them, whether it's breastfeeding or formula-feeding, we have to acknowledge that "deciding" not to nurse because you do not have the (frankly minimal) support from care providers and/or employers is not a choice: it's a problem. Until women have the support they need and deserve I will continue to talk about breastfeeding ad nauseam.

Our bodies are not inappropriate, and one way I intend to keep driving home that point is by continuing to talk about breastfeeding.

Breastfeeding is also a feminist issue. We see breasts everywhere in American culture, from advertising to TV to fashion. And, hey, I'm a big fan of boobs, but I wish we could also see women take agency over their own breasts for whatever purposes they want. Yeah, breasts can be sexy, but they can also be functional — like if you want to feed a baby with them. Or they can simply be sacks of glands and fat hanging off our chests. The point is, it seems that unless breasts are serving to titillate a male viewer, they're not to be discussed and kept out of sight. Frankly the fact that we can openly discuss breast cancer in 2018 is a feminist victory, because that wasn't always the case. (Though that's not to say that even breast cancer hasn't been sexualized.) But while there is certainly, in some circles, undue pressure to breastfeed, there's an equally powerful force telling women to shut up about their boobs and keep them out of sight.

Our bodies are not inappropriate, and one way I intend to keep driving home that point is by continuing to talk about breastfeeding.

Breastfeeding was also an important, meaningful experience for me. As a result I like talking about it, so I will. And, sure, if I talked about nothing but how I nursed my kids it would probably be annoying, but I don't think it's untoward to be open about the positive (and some of the not so positive) experiences I had.

Being open about my own experiences lets people know that if they ever want to chat, I'm their person.

I also think that sharing experiences — good, bad, and otherwise — is a way we can not only destigmatize breastfeeding but help those who want to learn more or glean insight on how to be successful themselves. Because, frankly, the larger narratives on the issue can be very black and white, dominated by people with hard feels about breastfeeding — either it's dirty and shameful and should be kept in the shadows or all babies must be breastfed or they should be removed on the basis of child abuse. As in all things, the extremes tend to get the most air-time, which basically never helps anyone. So I like to keep it real, keep it personal, and share how I, a normal human person, approached breastfeeding. Being open about my own experiences lets people know that if they ever want to chat, I'm their person.

So, yes, breastfeeding is over and done with for me. Barring some bizarre and unexpected hormonal or glandular issues I'll never lactate again, let alone feed a baby with my body. But I'm not done talking about it with anyone who cares to, or with people who might not want to hear about it but who really have to deal with it anyway. Our bodies and our babies are worth the time.

More Like This
10 Ways Breastfeeding Is Good For Moms, Too
Why Does My Baby Cough While Breastfeeding? Experts Explain
How To Tell If Your Newborn Is Nursing For Comfort
9 Reasons Why Some Women Can't Breastfeed