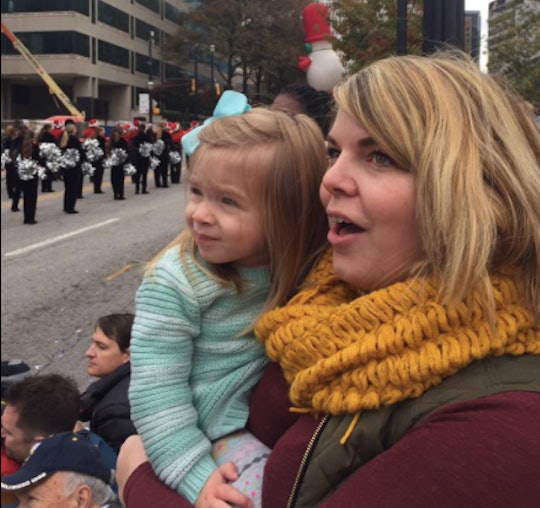 The Christmas that everything changed took place when I was 11 years old. It was a big Christmas — the year I finally (FINALLY) got my American Girl doll, the first Christmas I spent in England, and the year I learned that Santa Claus wasn't real. Kind of. I mean, all the evidence was there. I saw my mom sneak into the bedroom, grab the bag at the foot of my bed (where Santa stashed some gifts), and sneak back out. I knew she did it so she could "play" Santa and, at 11 years old, my stomach hit my knees. I truly felt like my childhood was over.

Until I refused to believe it.

OK — I mean, I'm almost 30. I have my own little girl now and every Christmas morning when we wake up, the presents under the tree from Santa are all the ones I bought through December and wrapped into the night on Christmas Eve. But I'd be lying if I said there isn't some tiny part of my heart, of my soul, that still believes in Santa Claus.

I was at the age where I should've been daydreaming about boys, not Santa.

When I tell this story to people, they usually laugh, scoff, or tell me I'm adorable. "Eleven? Oh my god, how innocent were you?" And I can tell you — pretty damn innocent. I was not your average 11-year-old girl. My mom was my best friend, I still cherished my baby dolls and Barbies and dollhouses, and I was desperate to stay a child.

That Christmas, I had spent much of the night awake, and not for the usual Will-I-Get-An-American-Girl-Doll reasons. Instead, I had looked out the window of my mom's childhood bedroom willing myself to see a streak of Santa's sleigh amongst the stars in the midnight sky. I convinced myself half a dozen times that I saw Santa, even after my mom had snuck upstairs. I remember crying, feeling as if Christmas was so different now and nothing was ever going to be the same. (I was... a melancholy child sometimes.)

But the part that really gets people is that I was 11 years old. I was at the age where I should've been daydreaming about boys, not Santa (to be fair, I was doing both), and most people seem to think that children over the age of 7 are weird for believing in jolly old Saint Nicholas. In fact, there are plenty who argue that continuing the "lie" about Santa will only harm your child in the long run. But experts say they're wrong, and keeping the "magic" alive beyond the point of believability might actually be good for them. When you really think about it, it makes sense. What else explains grown men and women standing in line to be sorted into imaginary wizarding school houses? Why do adults get autographs from other adults dressed as Disney princesses and beam with pride in the pictures? Magic is healthy and, honestly, it's a form of self-care. It's cathartic and it's something we work tirelessly to protect for our children. Why should an age matter?

Dr. Frank Sileo, licensed psychologist and award-winning author of eight children's books, tells Romper that many parents seem to think there's something detrimental about their child believing in Santa, but there's truly nothing to fear.

"Given the world we live in today with all the horrific news out there, Santa can be viewed as a metaphor of faith, goodness, and generosity," he says. "The belief in Santa supports a child's wishful and magical thinking that plays a valuable role in child development during the early years."

You hear that, Facebook moms who argue that Santa shouldn't "get all the credit" on Christmas morning? Santa is good and light and pure, and you're a big ol' Grinch.

Sileo says that these days, parents seem intent on presenting "far too much 'real' information" that children aren't ready for. "There is nothing wrong with believing in something that we can't see," he says. "That is not only the basis for spirituality, but of the innocence and playfulness of childhood. We need to stop worrying about Santa being a lie and let our kids enjoy the fantasy for as long as they can."

I know a big part of it was keeping my parents happy — the more into the magic I was, the more they were.

That was my exact reasoning at 11 years old — I wasn't ready to let go of the magic. I saw my mom add the presents from Santa to my bag with my own eyes, but I still leaned as far out of that window as I could, desperate to hear Santa's sleigh bells or see his eight reindeer cutting through the night. The draw was believing in something I couldn't see — something magical, something full of faith and goodness, something I wanted to always believe in.

But I know a big part of it was keeping my parents happy — the more into the magic I was, the more they were. It never felt like a burden. Instead, it felt like repaying them for all the magic and goodness and light they had poured into my life.

Sileo agrees. He tells me that discovering Santa isn't real isn't detrimental to a child's development. In fact, a lot of kids pretend to still believe to keep the magic alive for their parents (and to keep the presents coming). Sileo told me about a study published in Psychological Reports a few years back that looked at the emotions of children meeting Santa at a mall. The researchers found that "80 percent of the children looked indifferent," he says, "while 87 percent of their guardians appeared to be happy."

Lena Zettler, MA, LPA, director of Psychology at Cook Children’s Medical Center and a child development expert, has a similar opinion. She tells me that it's more than just believing in Santa because of gifts or because children are told to. "What Santa represents in our culture is associated with giving, and family, and traditions that bind families together," she says. "I come from the perspective that when a child has a belief in something that is good, it is never a detriment to the child, regardless of age."

She notes that while "very young children do have 'magical thinking,'" as they develop, they begin to learn more about the natural world and logic, which replaces their "magical thinking." When it comes time to question Santa, that is a natural part of a child's development — they're understanding the world around them.

Surely an 11-year-old crying as she looks for Santa in the sky is cause for concern, right? Nope.

At the same time, the reason for holding on to the Santa myth has everything to do with what he represents. Zettler says that the belief in Santa is more than just "magical thinking," explaining, "Some kids hold on to believing because it connects them to traditions, family members, family times, and hope, in a meaningful way." She gives the example of an older sibling keeping their little brother or sister's belief alive.

"There are many good reasons why a child who no longer has magical thinking about other things still looks forward to Christmas traditions and experiencing that through believing in the magic, mystery, and innocence of Santa," she says.

But surely an 11-year-old crying as she looks for Santa in the sky is cause for concern, right? Nope. Zettler answers simply, "Parents need not worry about this. I suggest they enjoy it!" (You hear that, Mom? Proof that you should continue signing "Love, Santa" on at least one gift for me each year.)

Sileo agrees. "I certainly don't believe that parents need to be overly worried." In fact, he says, the only thing you should be mindful of is if your child experiences bullying. Then, it might be time to step in. But if your kid is anything like me, believing in Santa at the age of 11 means you have some pretty strong convictions and a lot of confidence in yourself. In short, they'll be fine.

In The Santa Clause, the classic Tim Allen Christmas movie, one elf has wise words about believing: "Seeing isn't believing, believing is seeing. Kids don't have to see this place to know that it's here. They just... know."

And that faith, that pure, unadulterated love for magic, that trust that isn't burdened by reality or logic or actual evidence, is what keeps me up every Christmas Eve.

Even after I've wrapped all my daughter's gifts, and after I've signed "Love, Santa" on the gift tags (and even after I've eaten all but half of a cookie she left out for the jolly fellow), I still slip outside and stare up at the night sky, hoping for a glimpse of his sleigh with my heart nearly hammering out of my chest. I can feel him — I can feel everything Santa represents — and it soothes the ache of an 11-year-old's growing pains. Maybe... just maybe...

More Like This
Is There Parenting Advice To Take From ‘Strangers To Ourselves’?
Widows Are Expected To Mourn Forever — How Do I Date Again Without Shame?
Molly Yeh Draws The Line At Hot Pockets
Home Reno Culture Makes Me Feel Like I Live In A "Before" House