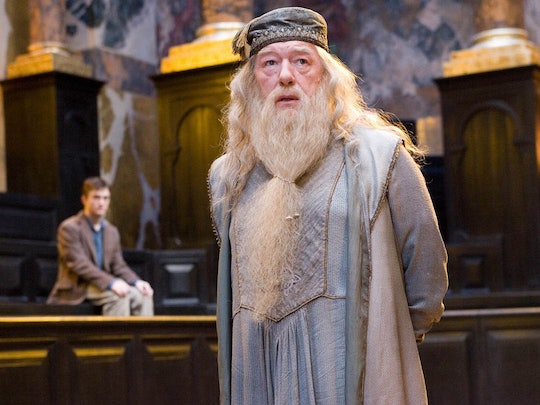 I Parented Like Dumbledore For A Week & Here's What Happened

I might be a bit of a helicopter mom. I never planned it that way, but looking back, it seems that my husband was always the one pushing for our son to learn to do things on his own, while I was still babying him. But as parents, we're not actually raising children, we're raising adults in the making, so my son needed to learn to do things on his own. And I can't think of a more strong, independent kid than Harry Potter, so why not try parenting like Dumbledore and see how that works out?

You know that scene in A Christmas Story when the family's eating dinner, and you're wondering why the hell school-age Randy is still wearing a bib? I never raised an eyebrow. It's easier to buy Velcro shoes than to teach a kid how to tie a bow, and my son actually begs me to micromanage him while he cleans his room. This isn't a good look for either of us.

By comparison, Professor Albus Dumbledore was very hands-off. Throughout the Harry Potter series, Dumbledore preferred to let Harry and the gang figure things out as they went along, offering only as much guidance as they absolutely needed to get by, often in the form of cryptic clues (think of his advice to Harry and Hermione in The Prisoner of Azkaban: "If you succeed tonight, more than one innocent life may be spared."). And how did all that turn out? Well, those kids did pretty much save the world, so...

OK, fine, parenting exactly like Dumbledore is impossible, because he didn't have kids of his own, and I'm not a wizard, and I'm sorry, but I just think it's really irresponsible to let children fight dragons and mix potions and ride brooms without a helmet. But I could try not to do everything for my son, and hope that he gained some of Harry's courage and independence in the process. So I gave it a week, put on my best Dumbledore, and this is what happened.

Oh, P.S.: I did it all while at the Wizarding World of Harry Potter at Universal Studios.

Letting Him Do Things Himself

Once I made a point of noticing when I did things for my son that he could have done for himself, I was surprised at how often it happened. At a restaurant one day, I offered him ketchup for his fries. As I reached for the bottle, I thought, He can totally handle that. So rather than squeeze it out for him, I simply handed it to him and got back to my own meal.

The Boy Who Once Lost His Sh*t if he lost sight of his parents on the playground now happily darted away from us, making new friends and having a ball.

He's 7; the days of me attending to him and ending up with a cold dinner of my own should be long gone by now! And guess what? He was, indeed, totally capable of squeezing his own condiment. Just like Dumbledore, the most powerful wizard in the world, probably could have handled Voldemort himself, he knew that with a little guidance, Harry could, too. (I understand the jump from ketchup to Lord Voldemort is long and far, but roll with me here, OK?)

Normally, after my son does his homework, I check it and circle all the incorrect answers so he can go back and fix them (no, I don't fix them for him; I'm not that bad). But is that really helpful? Because I was channeling my own inner Dumbledore this week, I started having him check his own work. The unintended bonus more time for me, yet again! I almost felt a little guilt letting my son go off into the world with the wrong answers on his paper, but then I realized, whatever, it's only first grade.

Dumbledore was in charge of Harry's education, too, but he stayed back and let him deal with his schoolwork and teachers on his own – even when he knew full well that Professor Snape hated his guts. He never let things go too far when Snape acted punitively towards Harry, of course, but for the most part, he let Harry fight his own battles, and he turned out great in the end.

So chances were that my son would make it out OK too.

Letting my son mess up was hard, I'll admit. It seems so much easier to reach over and correct him than to let him make mistakes and deal with the consequences. But that's how we learn and grow. Imagine if the "affluenza teen" Ethan Couch's parents had let him deal with the consequences of his actions? Perhaps four people wouldn't have been killed as a result, even though Couch was not convicted. It's an extreme example, I know, but the point still stands. I want to raise a Gryffindor, not a Slytherin. (I also understand there is nothing wrong with Slytherin, we're just firmly a Gryffindor family over here.) And that means letting go and allowing my little muggle to face a few dragons on his own (again, metaphorical dragons; I'm not nuts).

Dumbledore didn't want "his kids" growing up to be weak, and he knew that in order to make them strong, he had to treat them like they were strong from the start. He believed in them, and his belief is what made them who they were. When I stepped back and thought about it, I realized that letting my son make his own mistakes would award him tons more teachable moments than if I preemptively stopped him from every screwing up. Looks like Dumbledore was on to something, huh?

We survived! After a week of getting my Dumbledore on, I could definitely see results. My normally timid kid was noticeably more outgoing, and I have the Hogwarts Headmaster to thank for that. The Boy Who Once Lost His Sh*t if he lost sight of his parents on the playground now happily darted away from us, making new friends and having a ball. He spoke to adults he'd never met. He rode scary rides (even better — he rode them all at Universal Studios, so yes, I did parent like Dumbledore at Dumbledore's home, thank you very much). He spoke up when he wanted or needed something, rather than waiting for me to ask him. He grew up, is what I'm saying.

Of course, my son still needs me. But he doesn't need me as much as I thought. And while I still don't think he's ready to go off and save the world with the help of a couple of plucky pals, he's capable of far more than I thought he was. So I guess Dumbledore was pretty wise, after all. I think I'll keep it up.