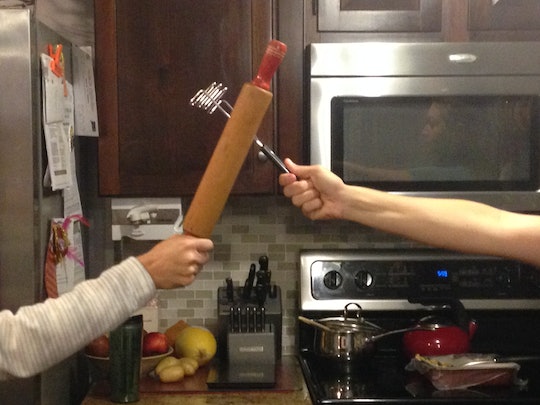 I Planned Thanksgiving Dinner For The First Time, & This Is How It Went

A word of advice: If you're going to stage a family coup, don't do it when dinner's on the line. Last year, my sister and I had the not-so-brilliant idea to try to "take over Thanksgiving," and as a result, not only did the entire family come dangerously close to having lo mein for dinner, I almost lost sight of what makes the holiday truly special.

For as long as I can remember, my sister and I have watched and helped our mother prepare an epic Thanksgiving meal. My family reflects on Thanksgivings past like some people talk about previous Superbowls. The year 2007 will forever be known as The Year Of The Chocolate Truffle Bowl Of Love, and 2012 will go down in infamy as Year We Forgot The Cranberry Sauce. Thanksgiving is our day, and no one does it better than my mom. That is, until my sister and I tried to take the reins on the holiday.

After playing second string to the MVP for so long, my younger sister and I thought that we were finally ready to step up and take on the meal ourselves. You'd think two adult women with graduate degrees could handle making a single meal for a dozen people, but poor planning, our sibling rivalry, and the fact that we came up with our genius Thanksgiving plan on Thanksgiving morning and never actually asked our mom if she was OK with us taking over sorta kinda meant we were starting off on terrible footing.

Still, we wanted to give it a try.

Setting The Stage, And The Table

Early Thanksgiving morning, my mother, sister, and I gathered in the kitchen to start cooking. My sister is usually responsible for deviled eggs and the green bean casserole, while I concentrate on desserts and sweet potatoes. Our mom handles cooking the turkey, stuffing, stuffed mushrooms, corn, cranberry sauce, mashed potatoes, rolls, gravy, and butternut squash, as well as overseeing everything else and playing occasional referee between my sister and I.

Because we make so many side dishes, my mom uses instant mashed potatoes to save time and has a tendency to forget about the dinner rolls until they're more brown than golden. Although the meal is always delicious, my sister and I were convinced we could magically pull off the usually menu plus potatoes from scratch and a complicated cheesecake.

Not wanting to hurt our mom's feelings, instead of telling her outright that we wanted to try and cook the meal ourselves, we kept suggesting she "relax," "have some wine," and "rest your feet". This was a mistake, as our mom interpreted these statements as us saying we didn't think she was capable of making a delicious meal, so she (rightfully so) refused to help us and settled herself on the couch to watch us crash and burn.

If I'd been smarter, I would have put down my whisk and begged her for forgiveness right then and there, but I was drunk on the idea of getting all the credit for a yummy meal, so we left her to stew and got back to the kitchen, certain she would forgive us once she saw how well everything turned out.

Everything's As Smooth As Butter ... Until We Actually Needed Butter

My sister and I are both Type A, so we wrote up a timeline listing when things need to go into the oven in order to be done in time for dinner. For a couple hours, it's like hosting our own cooking show, and I try (unsuccessfully) to convince her that we should start our own YouTube channel.

We hit a snag when it's time to make the stuffed mushrooms, since neither of us can recall exactly what seasonings our mom adds and we don't remember if she cooks the sausage before it goes into the stuffing. We consider asking her, but we a) know she's not happy with us, and b) we don't want to ask for help, so we look up a recipe online instead.

As much as we both hate the idea that our mom is upset, my sister and I really want her to be impressed with the meal. We want her to be proud that she's taught us both how to cook. Even if that means cooking side dishes in the microwave, we'll do it to make her proud.

And as much as I miss having my mom in the kitchen, being alone with my sister makes me see how much I miss spending time with her. Since she lives about an hour and a half from me, we don't see each other more than once every couple of months. It's nice to have such a large chunk of time with just her, and I realize how much I like who she is as an adult and how we can still make each other laugh until we snort.

It's like a Hallmark movie, until I ask her to give me a smidgen of butter and we start to bicker over exactly how much a smidgen is, and whether it's OK to not follow a recipe exactly.

This Turkey Is A Popsicle, And Other Culinary Disasters

Once we disagree about how much butter to add to the corn, things went downhill quickly.

I want to try roasting the stuffing in muffin tins for a change — she wants to follow tradition by putting it in the turkey. We get into a near-screaming match over whether or not the recipe for green bean casserole calls for soy sauce (I still emphatically maintain that it does), and things just continue to spiral from there.

According to our calculations, the turkey should be ready to come out and rest so the other side dishes can get into the oven, but the meat thermometer is showing that the turkey isn't even close to done, and our extended family is due to arrive in less than two hours.

And, as my mother predicted, there hasn't been any time to peel the potatoes, let alone get them chopped and boiling on the stovetop.

The Art Of The Grovel

We call a truce long enough to have a shot of apple pie moonshine (our mom's creation, naturally) and decide we have two choices: admit defeat and go apologize to our mother, or start looking up places that deliver takeout on Thanksgiving. Knowing our cousins would never, ever let us live down failing to deliver a turkey, and hating the idea that our mom isn't happy, we pour a glass of Riesling as a peace offering and make our way into the living room.

Because she is magnanimous and hates to fight with us, our mom accepts our apology as well as the glass of wine. She rejoins us back in the kitchen and resumes her rightful throne as Queen of Thanksgiving by pulling out the good meat thermometer that shows the turkey is perfectly cooked, balancing the spices in our bland attempt at stuffing and chiding me for getting flour all over her counter.

As always, Thanksgiving dinner was delicious, boxed mashed potatoes and all. While there is a tiny part of me that still wants to show off my cooking skills and say that I made the feast on my own, trying and failing to make Thanksgiving was an unexpected lesson in what I'm truly grateful for.

When we ran into trouble, my sister and I went to our mom for help, as we do with so many things in our lives. For a second I thought about what it would be like if we didn't have her around to fix the stuffing or give us advice, what it'd be like to make Thanksgiving dinner without our mother not because we wanted to, but because we had to. I hated thinking of the what-ifs, and realized how lucky we are to have her helming the kitchen.

There's plenty of other days in the year for me to show off my cooking skills, but for as long as I have my family around, I want to use Thanksgiving as a excuse to soak them in, laugh with them, and enjoy them while I can. So this year, and for as many years as I can, I plan to make Thanksgiving dinner along with my mother and my sister. Even if they're totally wrong about how to make green beans.