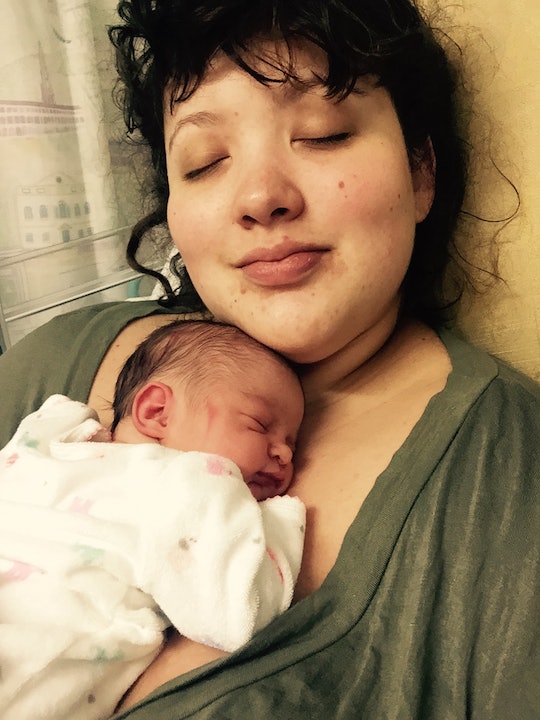 Why Is Pooping On The Table Such A Big Deal?

Most people — women in particular, I'd wager — don't like to talk about pooping. We usually grow up hearing some derivative of, "Ladies don't fart or poop," and we all too often internalize this digestive impossibility. We learn that Barbie doesn't poop. Bratz dolls don't poop. And that gorgeous model on the glossy magazine cover certainly doesn't poop. Nobody but uncouth, stinky dudes would ever think to do something so grotesque, right? The trouble is, everyone actually does. The stigmatization surrounding poop, however, makes plenty of us feel like we shouldn't. Or worse, that we can't — particularly when in the company of friends, colleagues, partners, dates, or just about anyone else.

This is likely why, when it comes time to give birth, approximately nine out of 10 people are scared sh*tless (or not so sh*tless) about the probability of pooping on the birthing table, according to Parents.com.

In the lead-up to labor, plenty of my own acquaintances asked me to rate, on a scale of one to 1 million, how mortified I was about crapping myself in front of my midwife or doctor or nurses or husband or newborn baby. "Um, probably a healthy zero," I'd say every time, rolling my eyes while knowing full well that there would be plenty more pressing matters going through my mind come the big moment.

When it finally did come time to push my baby out, three days worth of poop came out with her. (This wasn't solid poop, either, which I attribute largely to 50-plus hours of induction-related constipation on top of being pumped with lots and lots of drugs.) As it turns out, I was pretty horrified, but not at all of the poop. It was the awkwardness exuded by those around me that felt alarming — the inescapable feeling that the student-doctors and midwife and anesthetist were feeling embarrassed on my behalf (albeit thankfully not my partner, who has honestly seen me sh*tting enough times to be able to detect my poop in a line-up).

As their complexions grew rosier and their gazes darted to the walls or medical equipment or the crime-scene levels of blood and guts on the floor, I couldn't figure out what the big deal was. And I grew more and more annoyed; angered at the thought that pooping during labor would ever be something women are made to feel ashamed of.

Let's get something out of the way right off the bat: Giving birth is f*cking hard. Anyone who goes through that — regardless of whether the delivery is vaginal or cesarean; regardless of whether the person opted for no meds or all the meds — is nothing short of a powerhouse. The pain of it all is incredibly physical, undeniably psychological, and absolutely immeasurable. So the notion that something as commonplace (and essential to human life) as pooping could ever detract from the pride one should feel is seriously a tragedy. And it's also kind of scary — that women could fear releasing their bowels so much feels like an irrevocable consequence of the stigma surrounding natural bodily functions. Of the stigma of pooping or puking or farting or smelling bad if you exist in a feminine body, also known as a body that is expected to be pristine, proper, "ladylike," and refined at all times.

Even after I'd released myself all over the table and floor in the same push that brought me my daughter, it wasn't judgment I was feeling from the observers in the room, it was the fear of my fear.

The double standard is pretty sickening when you think about it. While men are regularly encouraged to joke and jest about their bowel movements, make farting noises at passerby, boast about the size of their turds, or discuss the mass and olfactory qualities of their dog's latest sh*t, women and feminine people are not only discouraged from doing the same, but encouraged to show no signs that they participate in the practice just as regularly as their counterparts. Let alone that they might actually find humor in poop emojis or satisfaction in farting so loudly that they scare their cat.

And so we worry about farting on our date. We worry about taking too long in the bathroom while at the mall with friends. We grow panicked at pooping at the office, lest a co-worker spot our shoes beneath the bathroom stall. We hold it in, we cause our stomachs to ache, and we allow socially constructed terror over something absolutely natural to cause us anxiety.

The same is true during labor. That nine out of 10 women would add to the gruesome intensity of those moments by worrying about pooping is just sad to me. Chances are it's going to happen, after all. Chances are the doctor or midwife in your company has seen it happen 100 times before. Chances are they've met an odor far worse than anything you're about to produce at some point throughout their careers. Chances are they do not care.

Even after I'd released myself all over the table and floor in the same push that brought me my daughter, it wasn't judgment I was feeling from the observers in the room, it was the fear of my fear — the ingrained belief that I'd be afraid and nervous and embarrassed about my diarrhea because so many women usually are.

While it's a shame that there still exists so much pressure put on women not to talk about poop, admit to pooping, or poop in the presence of other human beings who — shocker — also poop, the only way this kind of BS stigma is going to shift is if we help normalize totally normal behaviors, if we recognize that we pooped during labor, if we don't apologize for stinking up the bathroom after pooping at work, and if we grow to see the whole ritual as something that can cause immense relief and satisfaction.

Yes, I pooped on the table, but so what?