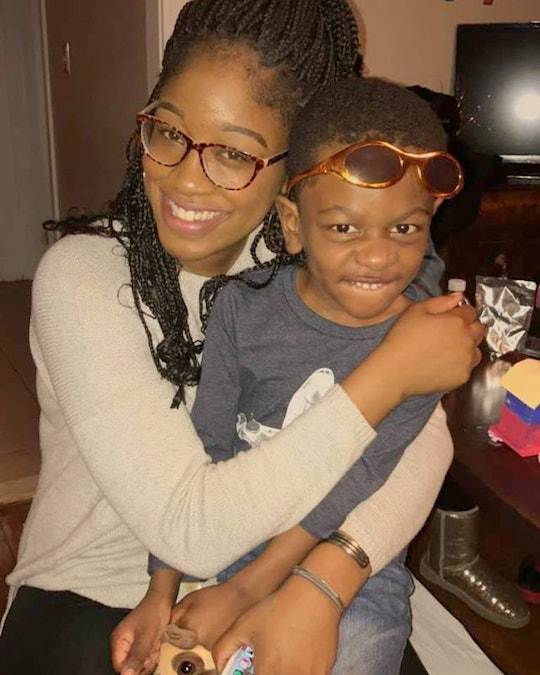 I Refuse To Let My Child Be The Token Black Kid

For the first few years of my son’s life, his grandmother watched him during the day while his dad and I were at work. It was a total blessing that she was around and willing to watch him, because I was not ready to send him off to daycare or preschool just yet. Right after he turned 2, we found a daycare that he could attend full-time.

Because I live in a city in New Jersey that is quite diverse, I wasn’t too concerned about making sure that his daycare would be diverse. But over time, as my son made friends and latched on to a few of these relationships more than others, I started to notice that the friends that he made most often were white children.

Now, since he is a young kid, I know that he's likely not making a conscious decision to befriend only white children. However, watching him befriend all of the white children in his class thrust me back to a time in my life when I did just that. I was the singular black friend in a sea of white faces. I was the token black friend, and I refuse to allow my child to be the same.

In high school, I could probably count my black friends on one hand. I was the new kid in town when I was a freshman, and as a tall, lanky black girl who loved N*SYNC and Kayne equally, making friends was not easy for me. The white kids in my class, however, flocked to me. From freshman year onward, most of my school friends were white, and the few kids of color at my school were other token black people like me.

Being viewed as an exception to the stereotype, like I was some special black girl immune to the negative judgments that typically face people of color in our country, felt like some sort of prize.

As an adult looking back on it now, I realize that the white kids at my school became friends with me because I didn’t fit the stereotype they'd already had of what a black girl was. Often, they’d comment on "how white I acted" or "how I wasn't ghetto at all." They'd tell me I was "so well-shaped for a black girl," and they'd make jokes about my name, my hair, my skin color, etc.

By the time I hit my senior year, my cultural identity was completely scrambled. I had heard people say that I "talked like a white girl" so often that it almost seemed like a compliment at that point. Being viewed as an exception to the stereotype, like I was some special black girl immune to the negative judgments that typically face people of color in our country, felt like some sort of prize.

During my freshman year of college, I started to step outside of that fog and realize just how problematic that view was. My campus had a large black community, so naturally, some of my first friends were black students. Creating those friendships with young black kids who also didn’t fit the big, scary black person stereotype taught me that I wasn’t the exception to the rule, or some sort of golden child who managed to escape the ghetto. In fact, I was the norm.

I entered young adulthood confused about how being a black woman fit into who I was, and if my race was even a good thing. I felt like the responsibility of what it meant to be a “good black girl” was on my back every single day.

Within that first year of college, I stopped hanging out with my high school friends. Being the token black friend just wasn’t OK with me anymore. I’d gone through a journey of personal enlightenment that took me four years to reach, and I wasn’t looking back.

In those four years of high school as the token black friend, I was the butt of many racist jokes. I was interrogated constantly about my culture, and I sat by as my friends criticized other black girls. Most of all, I entered young adulthood confused about how being a black woman fit into who I was, and if my race was even a good thing. I felt like the responsibility of what it meant to be a “good black girl” was on my back every single day. It was a constant struggle between the expectations my friends had of me being the black exception to the rule, and the negative stereotypes they had of other black people.

My son has been at his school for almost three years now, and he has formed several friendships with all sorts of kids, black and white. As he gets older and moves through different phases in life, it is my job as his mom to teach him the importance of making sure that his circle of friends is diversified. I never want him to be the only black boy in an all-white group of friends. I’ve been there, and it's awful. I don’t want to see my baby boy struggle to embrace his identity and culture. I never want him to have to choose between defending his culture, and standing by as his white friends make racist jokes. And even if his friends aren't overtly racist, this country has been built on the backs of slaves, and racism is weaved into every bit of its infrastructure. Having a group of friends that doesn't understand that struggle or that history will be harmful for my son.

My black boy, in order to survive in this country, has to be grounded in his culture. And he cannot do that if he's the token black friend.

We learn from our friends and lean on them as we grow. It’s simply not possible to do that if your friends don’t understand the fear of being pulled over by a police officer, or the roadblocks society puts in place to keep black men and women marginalized. My black boy, in order to survive in this country, has to be grounded in his culture. And he cannot do that if he's the token black friend.