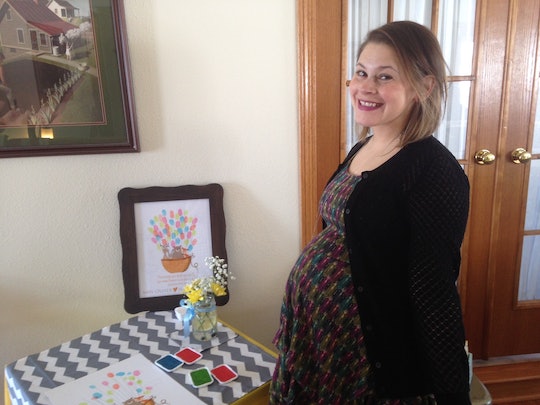 I Refused To Give Up Coffee During My Pregnancy

I hated being pregnant. I look at my son now, glowing and gorgeous, and think, how is it possible I hated the time in which he was growing in me? Well, it's probably because every decision I made during that time felt like a departure from the former me. There were so many changes and so many new tasks I had to take on that it overwhelmed me. So once I realized that other people, too, were not giving up coffee during pregnancy, I felt complete and utter allowance to enjoy at least some of the things that made me feel like me. Coffee has always been a "feel-good" item to me. Carrying my baby, I was uncomfortable 20 out of 24 hours of each day, and deeply scared of the unknown. I didn't know what was coming, or what would happen next.

But here’s what I did know: I knew a life before baby. And life before a baby was open-ended. I greeted every day with my normal-sized belly and flippantly began my caffeine consumption. I love coffee in all shapes and sizes and forms. I love espresso, brewed coffee, iced lattes — I love any conglomeration of the thing. I'd usually greet the sun with a bold black coffee, move on mid-morning to iced coffee, and then go back and forth between the two for the rest of the day.

I knew that it was generally accepted that pregnant women gave up caffeine and alcohol. But I remembered one of my very Type A friends telling me about her Diet Coke obsession and how she managed it throughout both of her pregnancies. So I went to the source. I knew she would have done all the research already. I asked her how many grams of caffeine are safe to have during pregnancy, and she told me what appears to be the general consensus: any amount of caffeine, up to 200 mg per day, is fine, according to Baby Center. If Diet Coke had 47 mg per can, she could have up to four per day. That was the max she'd have had even without a little one on the way, so no big life adjustment there! She was able to keep slamming those puppies like she did pre-baby days.

I drank between 150 and 200 mg of caffeine every day throughout the duration of my pregnancy. I didn't consider giving it up for one minute.

I decided to limit my consumption to mainly shots of espresso from Starbucks, ensuring the caffeine content per espresso shot would remain consistent. I did the math. Each shot had 75 mg, according to Starbucks' website, and I needed to stay under 200 mg per day. That meant one drink with two shots would be more than fine, or two drinks with one shot each of full-strength espresso and one with decaf. Traditionally, I have been horrendous at math. All the numbers and signals just jumble up in my eyes and my brain and I can’t do a thing with them. But when it came time to figure out how I could have my cake and eat it too, I became a damn whiz.

I drank between 150 and 200 mg of caffeine every day throughout the duration of my pregnancy. I didn't consider giving it up for one minute. For years, coffee has been the habit that gives me the most joy. I revere the ordering of my drink, the preparation, the first sips, the final sips. I consider coffee to be the great caretaker. It enriches me, by the way of borrowed energy. In a sense, it gives me life.

And as soon as that sucker came out, I moved back up to my pre-pregnancy amount, which was probably around 600 mg per day. During our hospital stay, I refused the coffee on the food tray and sent my husband to the actual coffee shop. I requested all of the things and I questioned nothing. I felt like I'd walked through fire and come out on the other side.

The espresso did little to keep me vibrant and everything just to keep me alive.

There have been no conclusive studies to show that drinking a limited amount of caffeine during pregnancy will harm your baby, according to the American Pregnancy Association. When consumed in amounts higher than the 200 mg, complications could arise — a common one being that coffee is linked to babies with low birth weight, according to a study of 60,000 women who drank between 200 to 300 mg of coffee during pregnancy by the Norwegian Institute of Public Health. While I had never considered my consumption played a part in my baby’s size, he was a little tyke at just over 5 pounds. Bear in mind, however, that I am not even 5 feet tall, and my husband is maybe 5 feet, 7 inches, so we’re not tall people. A little baby was already expected.

After we came home, I drank coffee around the clock, though it was nearly impossible to get an entire 8-ounce cup of coffee consumed in the morning. Every single time I grabbed the cup to take a swig, something would happen. The baby would cry. He would poop. He would need to eat. Need to sleep. I would let the dark substance tickle my lips, and then slam the cup down, promising to be back in a couple minutes. I'd return mid-afternoon, and the coffee would be ice cold and still more-than-half full. So I reverted to making shots of espresso and downing them in a quick one, two motion. Some days, I would drink them quickly, only to find myself asleep mere minutes later, holding my little darling to my chest in the rocking chair. The espresso did little to keep me vibrant and everything just to keep me alive.

In an unexpected life change, I now work at coffee shop. My pregnant friends ask me if they can have this or that and I guide them as best I can. Women with protruding bellies smashed under their steering wheels wait in line for their lattes and I feel a giant sense of camaraderie. Let no one judge you, sister, I want to say, before they drive off. This is how you take care of you.