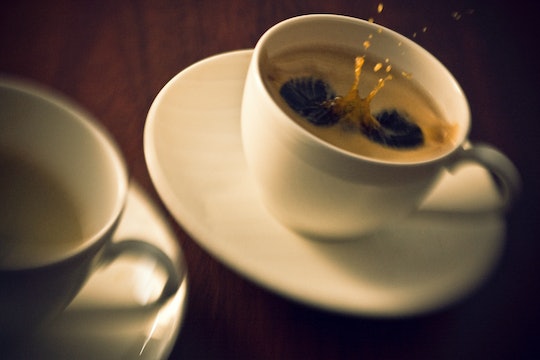 Is It Safe To Have Coffee During Pregnancy? You Won't Have To Skip Starbucks Entirely

On the giant (and I mean giant) list of things you shouldn’t partake in during pregnancy, some of them are pretty easy to give up. I didn’t mind skipping out on the occasional beer or cigarette, but giving up my sashimi habit? That was hard. Giving up my coffee? Nearly impossible.

I ended up switching to decaf and powering through, but I definitely missed my caffeine fix. There were times I wanted to cave in and tried to find out is it safe to drink coffee while pregnant. Turns out, you can and you can’t.

Now, these recommendations aren’t there to torture you, despite what you may think. There are a few scientifically-backed reasons to limit your trips to the coffee house during pregnancy. The American Pregnancy Association notes that caffeine is a diuretic and can cause frequent urination and possibly dehydration, a big no-no while pregnant. The APA also adds that caffeine in your coffee crosses the placenta to your baby, who’s still-maturing metabolism is not able to metabolize all of the caffeine.

Although those may not seem like huge red flags, more studies are being conducted all the time to find if there’s any correlation between low birth weight and caffeine consumption. A 2013 study conducted by BMC Medicine found that while there was no link between premature babies and caffeine, there was a connection between low birth weight and consuming caffeinated drinks. Specifically, if a child was expected to weigh around eight pounds, they lost between three quarters of an ounce to one ounce for every 100 milligrams of caffeine ingested by the mother. Those numbers don’t sound terrible, but for a baby who’s only expected to weigh around five or six pounds, those ounces can matter.

But don’t take the study completely to heart. Because it was observational, the results are not definite. And with another study conducted by American College of Obstetricians and Gynecologists finding that there was no link between premature births or miscarriages and caffeine, you can rest a little bit easier. It seems if you follow the recommended guidelines of only 200 milligrams of caffeine per day, you’re free from worry. Just remember that coffee when your baby is kicking you in the bladder all night because they’re hyped up on pumpkin spice lattes.