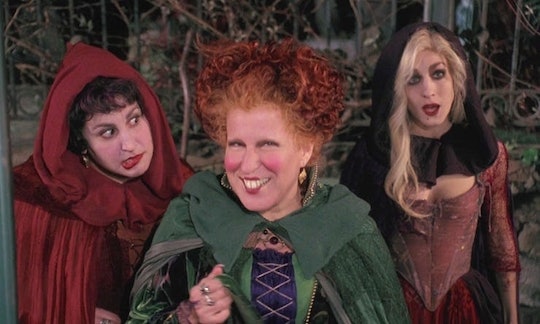 I Rewatched 'Hocus Pocus' & As A Mom, I Have Some Thoughts

Being a parent changes the way you look at a lot of things, as any mom or dad can attest to. From germs to hospital visits and even TV shows and movies, when you’re looking through your parental lense, things can appear to be very different from what they once were. So in honor of the Halloween season, I rewatched Hocus Pocus and as a mom, I have some thoughts about the Sanderson Sisters and really, everyone in this basically parentless New England town.

As a child, I remember sitting down to watch this movie and instantly relating to the kids — particularly when it came to Dani. But now that I'm a parent, it's almost like approaching this film with a fresh pair of eyes. I find myself less focused on the magic of it all and more focused on the total lack of adult supervision throughout the entire story. (Though if you don't think I still burst into song during that "I Put A Spell On You" scene, think again.) But I did find this to be a very different viewing experience when done through the eyes of a mother.

Once upon a time, I may have been able to watch Hocus Pocus during the Halloween season and see it simply as the comedical, family-friendly movie that it is. But as a parent, I see so much more now. There's a seedy underbelly to this film, my friends — one that I never quite noticed before today. And now that my rewatch has made me aware of them, I have some very important thoughts I'd like to discuss. Such as...

The Premise Of The Movie Is Actually Super Dark

I mean, take a moment and just really think about what the plot of this film entails. The Sanderson Sisters suck the lives out of children as a means to get younger. Don't get me wrong, I absolutely love this movie, but the dark undertones feel way more prominent now that I' have youngsters of my own.

Emily Is The Worst

Could she not even put a little effort into trying to escape her captors? No? I guess not.

Right from the start, Parker as Sarah Sanderson is the most boy-obsessed witch of them all. Like when she says, "Let me play with him" when they catch Thackery Binx in their cabin. This lady is all sorts of thirsty.

There's So Much Virgin Talk

Forget about the witches, the scariest part of this film is knowing that one day your child is going to watch this and immediately ask you what that means.

The Bullies Are Really Aggressive

First, Jay and "ICE" take Max’s shoes after essentially trying to rob him. And then, during trick-or-treating, they whoop, shout, and cheer about stealing candy from all of the kids in the neighborhood. They definitely deserved to get locked in those cages at the end.

The Struggle Of Max & Dani’s Parents Is Very Real

I get that Max doesn’t want to take his kid sister trick-or-treating, but if there was an adults-only dance party on Halloween night in my neighborhood, I’d want to try and make an appearance too.

I Am Now Too Old To Think These Boys Are Cute

As a kid, I could confidently say I thought that both Max and Thackery were total dreamboats. As an adult, I not only shouldn't say that, but I think I built them up way too much in my head. Weren't they somehow older looking before?

I will never not laugh at this scene.

That Title Mention Never Gets Old

"Oh come on, it’s just a bunch of hocus pocus!" And the award for best title line spoken in a movie goes to…

Where Are All The Babysitters?

OK, let's just say that I buy into the fact that every parent in town went to that big adults-only Halloween party at the town hall, what about the babysitters that are supposed to be watching their kids? When Sarah Sanderson lures all the kids out of their houses with her voice, how are Max and Allison the only ones aware of what's going on? The iPhone hadn't even been invented yet, so the distractions available to the sitters should've been minimal.

The Bus Driver Seriously Needs To Get Fired

Anyone else fail to pick up on the little joke he makes when Winnie tells him that they desire children? His response, in case you were wondering is: "Hey, it may take me a couple of tries, but I don't think that'll be a problem." He basically just offered to impregnate all three of them and now my whole innocent interpretation of that scene has been ruined.

That Madonna Costume Is On Point (Literally)

The Ending Will Still Give You *All The Feels*

When Thackery is reunited with his sister Emily, it’s still a tear-jerking moment. Probably even more so now, as an adult and parent myself.

But even with all its underlying sexual innuendos and lack of adult supervision, Hocus Pocus is still legitimately one of my favorite Halloween movies of all time. And even though my own son is still a toddler, it’s definitely a film I can't wait to introduce him to one day.