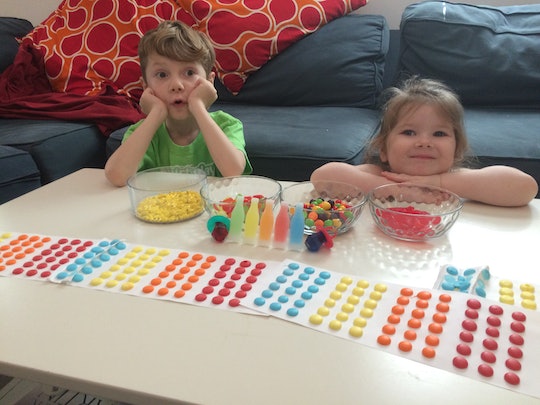 Like so many other people after learning of Gene Wilder's death, I was overcome with nostalgia. He was a pivotal part of my childhood in his portrayal of Willy Wonka in Willy Wonka & The Chocolate Factory. While I've seen so many more of his films since first meeting him as Willy Wonka, to me, his name still conjures images of dreams and sweets and magic. To celebrate Gene Wilder's life, I decided it was time to introduce my kids to Willy Wonka & The Chocolate Factory, and it was as fun and magical as I had hoped.

It's actually a bit of a wonder that I hadn't already watched this movie with my kids. My son, who is 6 years old, has recently discovered the joy of Roald Dahl's books. Together we've read Matilda, The BFG, and The Witches. We hadn't gotten around to Charlie and the Chocolate Factory yet, so I had waited to watch the movie, thinking we'd want to read the book first. (And I'm sort of ignoring the 2005 Tim Burton adaptation, because I just don't care for it.) But when I heard the news of Gene Wilder's passing, I immediately wanted to watch Willy Wonka & The Chocolate Factory, whether we had read the book yet or not.

So we decided to make a day of it. Any viewing of Willy Wonka required a fair amount of candy to snack on. So we went on a candy-hunting mission. My kids were delighted to fill our little shopping basket with bright colors and sugar. It was so reminiscent of that opening scene in the candy shop. The possibilities were endless, and there really was something magical about allowing them to pick out so many confections at once.

I told my kids about what a big part of the magic was due to Gene Wilder. How his piercing blue eyes, frizzy hair, and purple velvet jacket are seared into my memory as one of the best things about childhood.

Once we got home and settled onto the couch, I told them about how much this movie meant to me as a kid. We had the VHS, and any time I was home sick, this was one of the first movies I'd watch. As soon as the music started and the chocolate-making montage appeared on the screen, I was transfixed. The movie always took me outside of feeling sick and transported me for two wonderful hours. And I told my kids about what a big part of the magic was due to Gene Wilder. How his piercing blue eyes, frizzy hair, and purple velvet jacket are seared into my memory as one of the best things about childhood.

Of course, as the movie starts, Gene Wilder is nowhere to be seen. My son, having just had the experience of getting to literally be a "kid in a candy store" was immediately so sorry for poor little Charlie Bucket. He wanted to know why he didn't get to go into the candy store and seemingly get to eat candy for free. (Those kids don't seem to have to pay for all the candy that gets thrown at them, do they?) He felt how unfair it was and when the golden tickets were announced, he turned to me and asked, "Is Charlie going to get one?" I nodded, but that didn't make the moment when Charlie strikes gold any less magical for my son.

The real fun starts once they're in the factory. My daughter loved dancing to the Oompa Loompas' songs. My son was horrified at the other kids and their parents. He couldn't believe Veruca Salt was so ungrateful when Charlie was so happy for one bar. And that scene where Wilder sings "Pure Imagination," had them just as enthralled as I remember being. My son was particularly charmed when, after drinking from the flower teacup, Wonka takes a bite out of it.

When I asked him specifically about Wilder's Wonka, he said, "he was weird." That made me laugh. Because, yeah, he is weird. He's the perfect eccentric genius.

The kids were hanging on every word toward the end of the movie. When the tour was over and Charlie and Grandpa Bucket are dismissed without any love or chocolate, my kids couldn't believe it. And they were absolutely horrified when Willy Wonka let loose, yelling at the Buckets for breaking the rules. (But, no, seriously, why, after witnessing Violet turning into a blueberry, did they think it was a good idea to disregard Wonka's warnings? Seriously!) They were delighted once again to learn that Charlie would get to stay at the factory forever. Imagine all the rooms they hadn't yet explored! And his grandparents could maybe each get their own bed!

When the movie was over, my son declared that he "loved it." When I asked him specifically about Wilder's Wonka, he said, "he was weird." That made me laugh. Because, yeah, he is weird. He's the perfect eccentric genius. His mercurial portrayal always had me at the edge of my seat. I always loved how he could smile and bat his eyelashes while telling the children how awful they are to their faces. But perhaps, I've really come to appreciate that most now that I am an adult.

All in all, it was an afternoon very well spent. I don't think my kids will forget the first time they watched that movie, and I'm sure we'll be watching it again. When they're older, I can't wait to watch The Producers and Young Frankenstein with them. But for now, we can all enjoy the magic of candy, Willy Wonka, and the world of pure imagination.