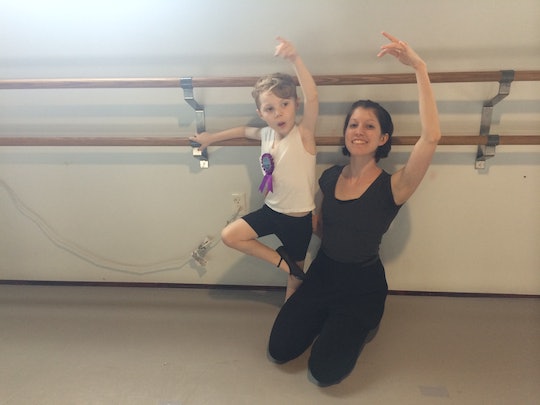 I Signed My Son Up For Ballet & This Is Why

When you think of ballet classes for preschoolers, you probably picture the light pink leotards and half-dozen fidgety girls standing in front of a mirror. You probably think of tiny buns and sweet little tutus swaying all over the room, doing dances choreographed to songs about princesses and fairies. And in my experience, that's not too far off. Except among the little girls, my son was in the ballet class, looking so serious and so happy to be there.

He didn't wake up one day just randomly asking to do ballet. I was browsing through classes online and when I asked him about dancing, he seemed interested. He already loved to dance. He loved getting silly with me while we listened to music. He vaguely knew what ballet was from watching Angelina Ballerina, and that show has girl and boy dancers. So when I saw the listing for ballet for kids, I figured: Why not? The fact that my son sees himself as a boy had very little to do with it — except for the fact that I thought it'd be stupid not to sign him up solely because of his gender. Besides, he'd already shown equal interest in traditionally "girl" and traditionally "boy" things (and he was already experimenting with gender). Ballet, in my mind, was no different.

Before the class I wasn't sure how he'd do with separating from me and paying attention to someone (and something) else for 40 long minutes, but that was yet another reason I thought ballet could be good for him. Life up to that point had had no structure for him, and I figured ballet was one of those things that's both appropriately structured and requires discipline. (Of course, at his age the discipline was all about listening and trying your best.) I could already picture him scampering around the studio, expressive and exuberant, excited and eager.

When it was time for him to go into the dance studio for the first time, a few of the other children were hesitant to leave their parents. Not him though. He followed the teacher, walking on light feet as she had instructed him. I watched through the window as he listened to a story, played follow the leader, and took turns moving in diagonals across the floor. He was so happy. I couldn't help but grin.

Following the first class, we signed him up for the rest of the session and bought him little black leggings and some white t-shirts and these adorably tiny little black ballet shoes. We went to a dance store to get the shoes since we couldn't find any boys' shoes at the big box stores. The man who helped us was so enthusiastic. It marked the first moment I realized that my son might really be a rarity — not only the only boy in his class, but maybe the only little boy at the studio.

He had the space to be creative and interpretive. He did as the music instructed — and he did it freely.

When we showed him his outfit, he instantly loved it. He didn't care that we had to shop for certain pieces in the girls' department. He was still oblivious to such things. As a boy, most of his pants had been baggy and thick. He loved wearing the leggings and bike shorts we got him. In fact, he still does. My partner and I joke that he's just a little hipster. And I have to admit, I thought he looked so adorable.

In class, he got a lot of attention for being a boy. The other moms would tell me how cute they thought it was and how cool that I signed my son up. I hadn't really thought of our decision as novel. It was just a really good fit for him. He's all long-limbed enthusiasm but not expertly coordinated and I hoped that dance would cater to both. While the petite girls in his class could easily jump over the small felt flower his teacher placed in the center of the studio, my son sort of ran up to it, stopped, and heaved himself over with an uncoordinated attempt at a jump. It took him until well after his third birthday to get both feet off the ground at once. It's possible that without ballet, it could have taken longer.

I hope that when someone says ballet is for girls, my son can challenge that idea.

In class, he was able to move freely. He could take up the whole studio with his movements. He had the space to be creative and interpretive. He did as the music instructed — and he did it freely. In ballet, so much of your performance comes from within, and even at a young age, my son had captured that. No one else mattered. He also loved showing off what he'd learned. When he saw his grandparents, he'd very happily demonstrate what he'd been working on. He'd practice at every opportunity.

For the last three years, he's continued to be enthusiastic about dance, even when we've taken breaks so that he could try swim lessons and acting classes. He never questioned being the only boy or asked me why he didn't wear a leotard. He just threw himself into the dances and games and stretching. I'd never seen him more focused in my life. The classes were structured perfectly, moving rapidly from activity to activity, repeating the same songs and dances from week to week. He really had a chance to master some of the moves. He started learning some of the terminology. He could demonstrate first position and piques and chasse. My partner and I were so proud.

His joy at learning ballet reinforced that it was the right choice for him, even if it wasn't in the normal wheelhouse of toddler boy activities. I feel like there's this small window in a child's life where they feel really free to try new things without fear of what other people might think. I already see that window closing as he goes to kindergarten. He's suddenly telling me what things are "cool" and even what things are "girl" things. Even if I disagree with labeling things as such, it just proves that he's not immune to what his peers think. I hope that if he continues to enjoy ballet, he'll keep at it, even if his peers might not totally approve. I want him to follow his passions regardless of how "cool" they might be. Ballet may not be his passion. And I'm totally fine with that, but I'm so thankful for all that ballet has taught him thus far. I hope that when someone says ballet is for girls, my son can challenge that idea.

When he first started out, he was still unaffected by what his friends thought. His enjoyment of ballet wasn't at all based on what he thought he should like. His enjoyment was obvious, especially when he got to perform in his "observation class," which was the little kids' equivalent of a recital. All the parents were invited into the studio, and we sat against the mirror with our phones out, taking pictures and videos as they worked through all the movements they'd practiced. My son was particularly good at bowing. He would get this proud and serious look on his face. He'd stand a little taller, placing one arm in front of his body and the other behind. Then he'd fold, quickly until his body was parallel to the ground. He always popped back up with a grin on his face. The girls would curtsy, my son would bow. And it was the only thing boys did differently.