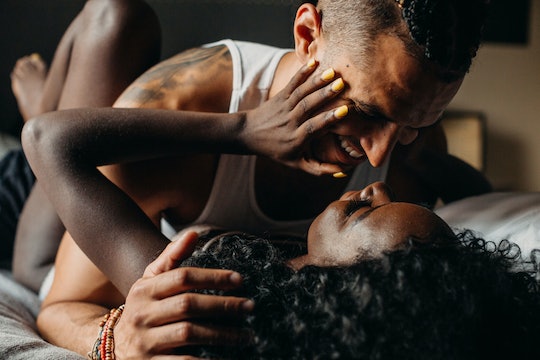 Orgasms are truly one of life’s greatest pleasures. I can still recall my first one — I didn’t even know what was happening other than that the pillow I slept with between my legs suddenly felt amazing and made me shake all over. Unfortunately, due to my school’s low-quality sex education, I didn’t really understand what was happening. All I knew was that I was hooked. What I didn’t know, though, was how much more difficult they would be to achieve the older I got, and how important it was that I prioritize my own orgasms — because no one else would ever really prioritize them for me otherwise (at least not in the way I can).

Like many folks, my teen years were spent learning more about sex from TV shows and internet porn than from anyone who actually understands or can explain the complexities of human sexuality. And on the whole, neither of those “teachers” ever really discussed the female orgasm much. Pornography generally centers around the male experience, with the penile ejaculation being seen as the “end” of sex. And for the most part, TV and movies also don’t typically show women orgasming (that does seem to finally be changing, though), or at the very least, it’s rare to see them reach orgasm outside of vaginal intercourse.

Of course, when you first start having sex, it can be generally disappointing no matter which way you slice it (especially if you start in your teen years). You and your partner fumble about awkwardly into it and then retreat even more awkwardly afterward. I had my fair share of good-to-lousy teen sexual encounters — none of which ever actually got me to orgasm. Back then I didn’t even really understand the mechanics of orgasms, or why a penetrative quickie just wasn’t cutting it for me. If anything, I was under the false impression that something was wrong with me. Why couldn’t I just orgasm after a few thrusts like so many porn actresses seemed to? It took several years for me to realize that for those of us with vulvas there’s way more to achieving orgasm than penetration.

I began to involve my hands more into the experience, and wouldn’t you know it? I finally came while I was with a partner.

Over time, resentment toward my partners began to grow. I would put in all the effort, with oh, so little return. The young men I was sleeping with always seemed to orgasm, whereas I was generally left unsatisfied by the end of it all. This isn’t exactly surprising since 85 percent of men reported achieving orgasm in their last sexual encounter, versus 64 percent of women, according to the Kinsey institute. Like many young women, I was only ever having orgasms when I masturbated alone. It was frustrating, because I knew there had to be people out there having better sex, and actually climaxing during it (sometimes more than once!)

Then one day, I realized I was feeling much too self conscious during sex. I had never thought to stimulate my own clitoris during penetrative sex, mostly because no one had ever brought it up. But it made sense, since that was how I came on my own. I began to involve my hands more into the experience, and wouldn’t you know it? I finally came while I was with a partner. Moreover, partners also began to stimulate me in this way, and it made things a million times better. And when I had a particularly lazy partner, I made sure to at the very least finish myself off (and then bid them adieu).

It took some time and even a few arguments, but one long-term boyfriend eventually got the hint and began to pleasure me in various ways even after he was done so that I could finally climax. He recognized my frustration (OK, I was pretty vocal about it), and he did something about it. It was pretty life-changing, really. It was at that point that I realized that I had to put my orgasms high on my priority list, because it was obvious that most partners (especially men) were prioritizing their own as well. The reason? Our culture prioritizes male orgasms, and it’s yet another ridiculous double-standard women have had to endure for far too long.

This of course, does not change when you get older, get married, or have children. If anything, after having babies, we have to prioritize our orgasms even more so. For some (lucky) moms, orgasms become more intense after giving birth. For others, so much trauma has occurred down there that you almost wonder if you’ll ever be able to climax again. Additionally, you’ll be exhausted, potentially not in your best hygiene, and perhaps not in the most amorous of moods. Being a new parent is exhausting, involves a seemingly insurmountable lack of sleep, and resentment can quickly grow between you and your partner due to your roles as parents. Simply put, orgasms are not high on any new parent’s priority list.

With time, you may eventually begin to crave those climaxes again — and if you truly want them, you’ll likely find a way. As a mother to a preschooler now, it can be a bit more challenging to make this happen as often as I’d like. While my son mostly sleeps on his own, he still does wake up in the middle of the night from time to time and sneaks into our bed. On nights when I’m feeling frisky though, I make sure to get him to bed early, leave some soft music playing for him, and close my bedroom door.

If they haven’t always been considerate of your orgasm, talk to them about it, and remind them that you aren’t just there to be used.

When my mind is feeling a bit too busy, thinking about whether I did the laundry or thinking about deadlines for work or thinking about some silly thing my son did earlier in the day, I have to work a little harder to declutter my thoughts. Yoga and some light meditation can help, conversation over a glass of wine can do wonders, and (for those lucky enough to be in legal states), a bit of THC and/or CBD can also bring on more relaxation. My husband knows that while I enjoy sex regardless, I enjoy it so much more when I have an orgasm (and wouldn't you know it? I'm also in a much better mood the following day). So we do our best to connect as regularly as we can — even if that means the occasional lunch time quickie, or quiet-as-we-can-be sex behind locked doors while our kid gets immersed in a movie in his own room (hey, parents have to get creative, OK?)

Your mileage may vary, but the point is, if you want to get it on, and you want to achieve orgasm (and there’s no actual physical reason why you can’t), then mama, you CAN make it happen. If I’ve done it before, you certainly can now. Make time to connect with your partner, and make sure they know what you like and what you want (as well as what you don’t). If they haven’t always been considerate of your orgasm, talk to them about it, and remind them that you aren’t just there to be used. You deserve some pleasure, too! When you’ve got some solo time, get to know your body better. Remember that while some women (roughly only about 25 percent) can have vaginal orgasms, most of us need some or a lot of clitoral stimulation — and there is no shame in that. Use your hands, ask for oral, or bring in some toys like a bullet vibrator to help get you there.

The health benefits from orgasms alone — from reducing stress and tension to reducing collagen reduction and helping you get better sleep — are worth putting in the extra effort and making them a priority in your life as well.