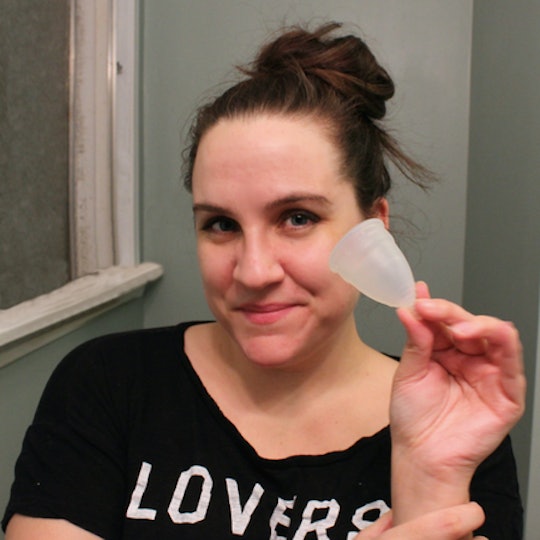 I Started Talking More About My Period & What Happened Amazed Me

I got my period one afternoon was I was 11, and had absolutely no idea what was happening. My mom wasn’t home, so I had to ask my then-71-year-old Italian grandmother for help (a woman who hadn’t actually had a period in so long that she’d never even used a self-adhesive maxi pad with wings before, not even kidding). It was awkward and weird, and really embarrassing, and it pretty much set the tone for the next, oh, 15 years or so of my menstruating life. Like countless other young women, I somehow internalized the message that anything to do with periods and everything it represented — vaginas, sex, womanhood — was taboo and secretly shameful. But a couple of months ago, something surprising happened: I talked openly about my period on social media after trying out a menstrual cup, and the reaction was eye-opening.

Until I saw my article published and out there for the world to read, I don’t think I’d ever realized how deeply uncomfortable I really was with the inner workings of my own body. There was, of course, the don’t ask, don’t tell policy I grew up with concerning sex (hence why I had no idea what was going on when I got my period that day), but there were other problems complicating the matter, too. I’d suffered for years with provoked vestibulodynia (which basically means my vagina hurt for no good reason), and later developed a condition called vaginismus, which made it literally impossible to have sex (or use tampons, or have a gynecological exam). In other words, my vagina represented both significant physical and emotional pain — and getting my period each month, along with crippling premenstrual dysphoric disorder (PMDD), felt like some kind of brutal cosmic punishment, like pouring salt in the proverbial wound.

When I began the menstrual cup experiment, I had a lot of reservations. I didn’t really know, for one, if trying to stick a little silicone cup inside my vagina was wise given my history (I no longer suffer from either vestibulodynia or vaginismus now, thank goodness, but I definitely haven’t forgotten what it was like). And I was also feeling pretty nervous about talking so directly about my own vagina out in the open like that, with my name and photo attached to it, easily Googleable for anyone who for some reason felt like searching for me.

This kind of conversation wasn’t just about menstrual cups. It was about discussing our periods without embarrassment. It was about deciding to be comfortable talking about something we were taught to be uncomfortable with.

When I got word from my editor that the piece was live, I cringed. I wasn’t even sure I wanted to look. But I did look, and it wasn’t as mortifying as I’d expected. I even felt kind of proud of myself for owning my own body like that — Hi, World, let’s talk about my period! — and bolstered by that feeling, I shared the piece on my Facebook account. Where people I know could read it. People I know in real life.

It didn’t take long at all for likes and comments to start pouring in. And a surprising number of friends wrote about how much they loved using menstrual cups, which I really was not expecting:

OMG I loooooooovvvvvvvveeeee my menstrual cup. I've been using mine for over 10 years, and it definitely took me a couple months to get the hang of it, but once you're used to it, it's easy. I pinch the cup a little to break the seal to pull it out. And, to keep it "horizontal," think of aiming it towards the very lower tip of your sacrum, or even towards your bum. I was always under the impression vaginas were an up and down thing, not a forward/backward thing.

I LOVE my Diva Cup! I've used it for three years and have not once used a pad or tampon in all that time. Wetting it before inserting it can help a lot and you'll figure out a fold that works best for you (I like rolling it so that the end is a small point). I think it's awesome that you investigated this alternative that many women are interested in trying but don't know much about!

Loved that article! I have been using a Diva Cup for about a year and I will never go back to pads or tampons. It is so much more convenient for me, and I will always recommend it as an alternative product if the conversation arises. It is sad that because of the taboo of talking about our vaginas a lot of people are uncomfortable with their own bodies.

As soon as I read my friend’s comment about the “vagina taboo,” it hit me just how right she was. In fact, I noticed then that a number of other commenters had added in a joke about their periods to preface their comments, or some kind of apology for the supposed TMI. We clearly all seemed to find the notion of talking about this stuff out in the open totally weird — but why? We’re all in our 20s and 30s, and many of us have children. How did the shame surrounding our pubescent bodies still manage to follow us into bonafide, grown-ass adulthood?

Having an open discussion about menstrual cups is important, because everyone who menstruates should be aware of their options, but I realized that this kind of conversation wasn’t just about menstrual cups. It was about discussing our periods without embarrassment. It was about deciding to be comfortable talking about something we were taught to be uncomfortable with.

It seems that the more we can do this — the more we can discuss vaginas and menstrual blood without using the sanitized, cutesy terms taught to us by '90s teen magazines ("riding the crimson wave"? Ugh) — the better off we will be. Don’t get me wrong, my little discussion wasn’t much — just a small Facebook thread — and we certainly weren’t dismantling the patriarchy or committing to radical free-bleeding to make a point (although more power to you if you’re down for that!). But it finally gave me the chance to realize that the period taboo that’s been handed down to us isn’t even real. It’s a burden we’ve been told we need to carry just by virtue of being born with uteruses and ovaries, but it’s also something we can choose to cast off at any time once we realize that hating our bodies is not actually a required part of growing up.

Since that day, I heard from a number of other friends who had decided to give a menstrual cup a try after reading my article and the ensuing conversation. I also heard from the customer service team behind the Diva Cup, offering some super helpful suggestions to address some of the issues I was having with insertion (keep your wrist straight when inserting and aim the stem out instead of down to ensure it’s going in horizontally!), and after a few more cycles of practice, I’ve now absolutely become a menstrual cup convert (although a note for other pelvic pain sufferers out there, you might want to try a smaller size even if you’ve had children!).

To be honest, I’m pretty surprised to find myself loving my menstrual cup. But I’m even more surprised to find myself accepting my period for the first time in almost 20 years of menstruating. I mean, I can do without the cramps and the bloating and the miserable PMDD symptoms (seriously, please, can that stop?!), but talking about my menstrual cup experience helped me finally become comfortable with the parts of being a woman that I’m supposed to be disgusted by, the part I’m supposed to pretend doesn’t exist unless I’m trying to get pregnant (or trying to not get pregnant).

My hope, of course, is that when my daughter grows up (and my son too, come to think about it), she won’t understand why it felt weird for a bunch of adult women to talk about their periods on the Internet. My hope is that she’ll be comfortable talking about her body, because she was never taught that there was any reason not to be comfortable talking about her body. And you can bet that when she gets her own period years from now, she’ll know exactly what’s going on. Who knows, maybe I’ll even get her a menstrual cup.