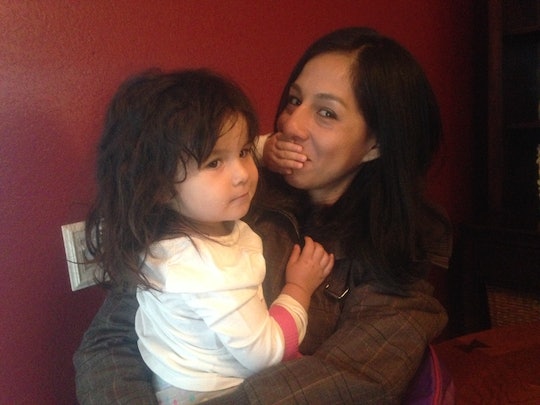 I Stopped Complaining About My Kids for One Week

Kids are amazing. Everything they do is amazing, from the time they learn how to clap their hands to the first time they construct a full sentence. Of course, the flip side is that kids are also amazing at pushing their parents' buttons: my toddler, for instance, just looked me in the eye and let our dog lick her face, mere seconds after I told her not to. During moments like these, I go from loving on my girls to complaining about them.

More Like This
Where To Travel With Your Kids This Summer
The Longest Kids Have Gone Without Washing Their Hair, According To 25 Moms
How To Celebrate Pride As A Family
Parents Are Vaccinated, But Still Nervous About Their Kids Getting The Shot

I know I shouldn't complain about my girls so much. I know I should just appreciate that they're healthy and happy. But I’m human, so when they do something that annoys me, I often vent about it to other people. I know that I should work on reining in how much I whine about them, which is why I tried to stop complaining about my kids for one week, just to see if I could do it.

The first day was pretty tough because on Wednesday, my daughters were in terrible twos mode. There's something about the middle of the week that just brings the sassy out of both of them. On Wednesdays, my husband and I are usually burnt out from work, so complaining comes easily to us. We were both tired and ready for some rest and relaxation. But of course, it's hard to relax when you know tomorrow is a school day and lunches need to be packed.

His reply was the wakeup call I needed. "Maybe it's because she's 2," he said.

Unfortunately, I slipped up early in the experiment, when I complained to my husband about how our toddler refused to practice her routine for her upcoming dance recital.

“Why won’t she just practice?! She only knows like two friggin' moves!," I whined to him.

His reply was the wakeup call I needed. "Maybe it's because she's 2," he said.

I immediately shut up. He was right. Her behavior was completely normal and I needed to cut her some slack.

Thursday was another day filled with plenty of meltdowns and a lot of negotiation. My preschooler in particular tried to negotiate for two books at bedtime when I said I would only read her one, and she asked to have strawberries with whipped cream when I said she couldn't have a bag of gummies.

Still, I didn't complain about their behavior. I almost complained to my mom that I didn't understand why she couldn't just take no for an answer, but really, who likes to hear the word "no"? Of course she's going to try to negotiate with me.

I’m pretty sure I’m the queen of whining. I whine about my day. I whine when things go wrong. And I whine about my kids, like when my daughter and I are late for swim class because she waits until the last possible second to use the bathroom before we leave.

I had to ask myself: did I really need to chime in and add my gripes about my own kids?

But this week, I tried to squash my own whining by trying to reword my complaints. This proved to be particularly difficult during a horrifying trip to Target, when I had to remind myself to take lots of deep breaths. My girls were fighting as they sat in the shopping cart, and they touched every single thing they saw.

After 30 minutes of me saying, “Girls, please stop that” or “Please don’t grab that toy/ball/very breakable picture frame," I got them back home and told my husband that while we had a very trying Target run, we made it out without anyone crying, least of all me. I didn't whine or complain about their behavior, but he probably knew exactly how that trip went anyway.

Around the fourth day of this experiment, I realized I often had the impulse to complain about my kids when I heard other moms talking about their own children's behavior. At work, when a co-worker mentioned how his daughter was acting like a diva and talking back excessively, I would join in the conversation and reference my 2 ½-year-old daughter’s new favorite saying: “I’m in charge." We'd then commiserate with each other about how hard it is to raise kids.

I realized that I often found myself apologizing for my kids when really, there was no need to apologize in the first place.

But this week, I had to ask myself: did I really need to chime in and add my gripes about my own kids? Of course not. It was just an automatic response based on what I had learned as a new mom: if someone is complaining about their kid, you join them. Motherhood can be lonely, and I learned early on that one way to connect with other parents is by complaining about the lack of sleep, the sore nipples, or the sleep regressions.

At a birthday party, I also realized that I complained about my girls when I felt that other parents might be judging their behavior. But did I really think that they were acting like brats just because they both asked for a red balloon, when there were already several purple and blue balloons blown up? Not really. They just knew what they wanted and besides, they were asking for it nicely. I was just apologizing for them because I was worried that the other moms would think I was raising entitled kids. I realized that I often found myself apologizing for my kids when really, there was no need to apologize in the first place.

Days 6 & 7: What Have I Been Complaining About?

My girls’ behavior is totally normal for their age. I realize that. Still, that doesn't make it any easier to deal with them in the moment. It's hard to raise little kids with big attitudes and still enjoy every moment with them without getting frustrated from time to time.

I’m not a supermom, or someone who can be happy all the time. That’s just not me. So when I get upset with my girls, I voice my frustrations — not necessarily to them, but to others. Sometimes I just need to vent to fellow moms, because I know they'll understand. But what this experiment has taught me is that I really don't need to complain about them as often as I do.