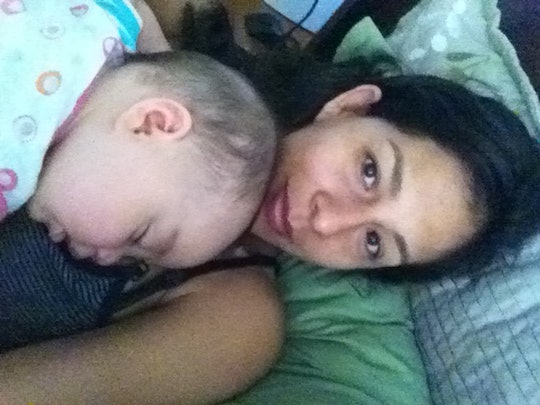 The Important Reason Why I Stopped Breastfeeding

But after a few weeks of nursing, I knew I needed to reevaluate my plan to exclusively breastfeed. Honestly, it was a lot harder than I thought it would be. I didn’t take into account just how much time my infant daughter would spend nursing during each feeding, and I didn’t realize how often babies ate. It was stressing me out. So after a little over a month, I stopped exclusively breastfeeding, because I wanted a life outside of motherhood.

Breastfeeding was nothing like I had imagined it. I loved gazing at my adorable daughter as she nursed, but it was usually was after she'd spent 5 minutes flailing and fussing, latching on and pulling off, before she could find a comfortable position. Plus, my daughter hated the nursing cover I had bought, and she was constantly pulling it off, which exposed my boob to anyone nearby whenever I nursed in public. That led to me spending a lot of time by myself at home.

It was so stressful trying to figure out how to spend more than two hours away from my daughter, let alone how to spend a full day away from her. That would've required ensuring I had tons of breast milk in the freezer, which meant I would have had to pump multiple times a day. It made me anxious just thinking about it.

When I stopped exclusively breastfeeding, I was finally able to have a life outside of motherhood.

Working from home didn't make breastfeeding any easier. Every time the baby cried, I had to stop and nurse her. If my mom was over, she would give her a bottle of pumped breast milk, but I only had a small stockpile of pumped milk, and I was always worried that we should save it for emergencies.

Luckily, I had a supportive husband and mom. who continuously told me it was okay to supplement with formula. When the pediatrician told me the same thing, I finally eased up on myself. Eventually, I went back into the office, and I bought a huge can of baby formula and started supplementing. It was the best choice I've ever made.

Knowing that my daughter no longer had to rely on me for a feeding took so much weight off my shoulders. I felt like I could give work my full attention which was incredibly important to me because I wanted to maintain a sense of my identity outside of motherhood. I could cover a city council meeting or interview a source, and I was able to give them my undivided attention. I no longer had to worry about finishing my work in a short time frame, because I had to get home to feed my starving daughter.

When I stopped exclusively breastfeeding, I was finally able to have a life outside of motherhood. I was able to take a Zumba class and not worry that I needed to get back to the house in time for a feeding. I was able to get a manicure and actually take my time at the nail salon. I was able to go to brunches with my friends and have more than one mimosa. I was able to go on dates with my husband that did not involve ducking to the bathroom for a pumping session, or rushing through dinner because we had to get home to feed the baby. I was able to spend long car rides without pumping in the car because I was worried my milk would dry up.

Of course, I still had to deal with pumping at work and at home, but I was able to maintain my milk supply by eating tons of oatmeal. Prior to supplementing with formula, I would worry that missing one pumping session would result in my milk drying up, but giving myself the freedom to supplement allowed me to gain some perspective and realize that skipping a feeding or a pumping session is OK. Most importantly, I learned not to feel guilty about putting myself first from time to time.

I knew it was OK for me to take time for myself.

When my second daughter was born, I nursed, pumped, and bottle-fed her breast milk and formula when she was two months old. I’m not sure if nursing was easier the second time around because I knew how to help her latch correctly, or because I was less stressed out about only giving her breast milk. But this time, she successfully nursed for 17 months because we both enjoyed it so much. At that point, I knew that it was OK for me to take time for myself, even if it meant having to supplement with formula. Once I came to terms with that, breastfeeding was so much easier.

More Like This
Paris Hilton Is Officially A First-Time Mom
When Does A Baby Recognize Their Father? A Pediatrician Explains
The Best Travel Tips For Solo Parenting
Does The FDA's Plan To Limit Lead In Baby Food Go Far Enough?
What Parents Are Talking About — Delivered Straight To Your Inbox