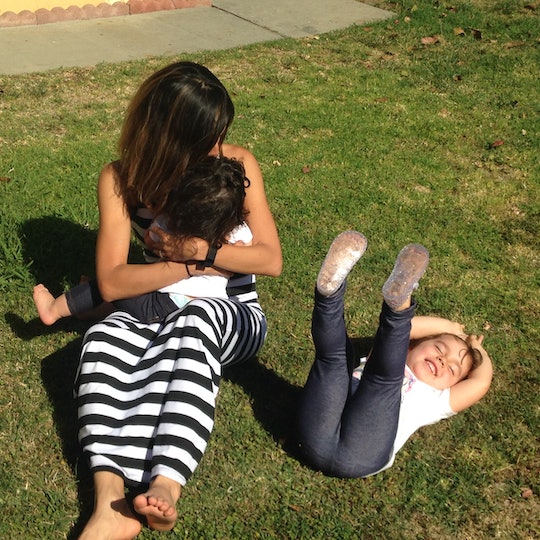 I’m Not Ready To Stop Breastfeeding My 17 Month Old

Whenever I tell people that I’m still nursing my 17-month-old daughter, I can count on being asked one of two questions: “How much longer do you plan to keep doing it?” or “Why?” I get that these are valid questions, given that my daughter no longer requires breast milk for nourishment and I’ve surpassed the recommended one-year mark, but my decision to continue breastfeeding is very personal. I'm not ready to stop breastfeeding. And frankly, when people ask why, I don’t have the answers they're looking for.

With my first daughter, the breastfeeding timeline was established after gleaning information from parenting sites, books, and my OB-GYN. As a first-time mom I was easily swayed to believe the “breast is best” ideology and gave in to the pressure of trying to live up to the parenting standards set by women who came before me. But I hated breastfeeding. The constant worry I was not producing enough milk resulted in eating tons of oatmeal, drinking as much water as my bladder could hold, downing fenugreek and Mother’s Milk tea, and skipping caffeine entirely in fear any misstep would disrupt my milk production. The sore cracked nipples, the engorged boobs, and waking up with milk-soaked pajama tops was annoying, but it was the fact that the milk was a tiny human’s only source of nourishment that stressed me out.

It’s been five months since my daughter’s first birthday and I’m still not ready to give up nursing. There are so many things I fear I’ll lose once I stop.

I cut my first daughter off from the boob the day after her first birthday and happily tossed out my tattered nursing bras. I was free! Then I became a mom again and hesitantly registered for some nursing bras and tops because although I hated breastfeeding the first time around, I knew I wanted to try to provide my second daughter the same experience as her older sister. So I prepared for the cracked nipples, the agonizing latch, and smelling like nauseatingly sour milk. I set out to nurse for one year – if that. But I was wrong. This time around, breastfeeding came naturally.

My second latched on easily and I alternated formula with breast milk when my body needed a break. The pressure of the “breast is best” mentality and hitting breastfeeding milestones were gone and it allowed me to really focus on my daughter and actually enjoy those breastfeeding sessions. It’s been five months since my daughter’s first birthday and I’m still not ready to give up nursing. There are so many things I fear I’ll lose once I stop.

With my first daughter, even though I was excited to no longer have to wear breastfeeding tops and bras, or worry about where I could feed discretely while out in public, I missed the time we spent together during those breastfeeding sessions. That’s why I’ve been more of a pushover with my second daughter. Anytime she wants to nurse, I’m ready to give her the goods.

Perhaps it’s knowing she’s my last baby that is making me reluctant to cut her off from nursing, or maybe it’s because I know how the relationship between us will change and I’m just not ready for it.

There’s an inside joke she and I share. And it’s only something we do during those 30 minutes in the morning when the house is quiet and everyone else is asleep. The only sound is the coffee percolating and the creak of the glider as I rock back and forth as my daughter breastfeeds and I stroke her hair. As she feeds, I hold my hand out near her feet and she takes the cue. Smiling, but still breastfeeding, she places her foot in my hand and laughs as I kiss her chubby toes. Then we do it again with the other foot. It’s how we start our morning every day. Just the two of us, with her latched to my breast as I stare at her wavy black hair and hazel green eyes, soaking in the peaceful moment before I have to leave for work.

We have special little moments with one another, little games we play while she’s nursing, and an almost inside dialogue that only she and I understand. I worry that all these inside jokes and time together will disappear and the only one who will miss it will be me.

And when I get home from work, she’s always the first one to greet me. She runs to the door when she hears the rattle of my keys, reaches her arms up for a hug. She’ll point to the couch asking for “che-cha” (baby talk for “chichi” in Spanish, which means “boobs”) — a request for me to sit down and feed her. On the couch and in the ready-to-breastfeed position, I’ll say “one,” she responds “two,” and then as I say “three,” she latches. When she’s breastfeeding she’ll point to her head so I can rub it or she’ll reach for my hand and play with my fingers. Sometimes I feel like breastfeeding my daughter after an especially trying day helps me relieve some of my own pent up stress.

During these sessions she’ll sometimes pop off and “talk” to me in her baby language before latching on again. Other times she’ll simply breastfeed in silence and eventually fall asleep. It’s these intimate snippets of time I fear I’ll lose once she stops breastfeeding. Perhaps it’s knowing she’s my last baby that is making me reluctant to cut her off from nursing, or maybe it’s because I know how the relationship between us will change and I’m just not ready for it.

We have special little moments with one another, little games we play while she’s nursing, and an almost inside dialogue that only she and I understand. I worry that all these inside jokes and time together will disappear and the only one who will miss it will be me.

Never again will I have these experiences of being really needed. My 3-year-old daughter still needs me, of course, and loves hugs and kisses, but it’s different. Now she wants to do everything on her own. She falls asleep in her own room, in her own bed, and does not need to be held for hours at a time in order to feel comforted. Our alone time comes in spurts between planned playdates with her friends and during her sister’s limited nap time.

I know what’s coming. I see a future of stolen moments, reminiscing about the baby years, and a desire to return to the days when my girls needed – wanted – me around all the time, an age when mom was the most important person in their life.

I’m not ready to give that up quite yet. So I’m taking my time… maybe even milking it.