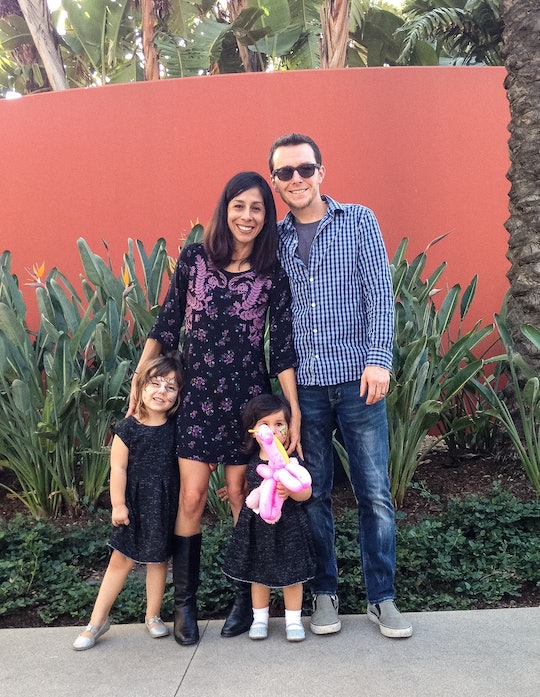 I Stopped Nagging My Partner For A Week

I’m the first to admit that I am kind of a control freak. The thought of things in disarray makes my heart race with anxiety. I try to rein in my madness, but most of the time, I just end up repeatedly asking my kids and my husband to put their things away. I feel bad about doing this, but often it's the only way to get things handled around the house, especially because my husband is way more passive than I ever will be when it comes to doing chores.

I've been called a nag more often than I'd like to admit. To be honest, I think the term is a little bit sexist and offensive, because when I picture a nagging wife, I envision Claire Dunphy from Modern Family, standing over Phil and constantly telling him what to do. I hate the word "nag" and take deep offense to it. I prefer to be called persistent or determined rather than a nag, which is a term usually reserved for women. My husband defines nagging as bugging him repeatedly about the same thing, like when I ask him to fix something around the house. so I guess there might be some truth to the label.

Of course, the ideal solution to my nagging problem is just for my husband to tackle said task right away, instead of me asking him to do it multiple times. But obviously, we are not on the same page, so I decided to stop nagging my partner for a week to see if being more passive from time to time would be more beneficial to my marriage. Here’s what happened.

I started this week-long experiment the day before we left on a trip to Legoland in California. Vacationing with little kids can be stressful, so I anticipated some slip-ups here and there. But I promised myself that before I asked my husband to do something, I'd take the time to really consider what I was asking of him, so I wouldn't be nagging him. That said, I didn't tell either my husband or kids about it. I figured they'd likely take advantage of my temporarily permissive nature.

Packing the day before a trip was not the way I wanted to start this experiment. I had to pack for myself and the girls, so I knew my stress level would be at about a 9. I set an alarm on my phone to remind me that this was the first day of the experiment and I had to watch myself. But it wasn't easy.

If I wasn't actively watching how much I “nagged” my husband, I would have nixed the whole late-night snack suggestion before the candy box was even open. Instead, I watched my daughters while pretending to read an US Weekly on the edge of the bed.

I typically spend a few days before a trip getting everything ready by buying snacks and toiletries. I also take the opportunity to begin the process of putting together outfits for each day we will be away. It’s definitely a process, but it seems to work, since my kids have yet to run out of clothes on a trip, and we have never had to dash to the store because we forgot something essential, like toothpaste or baby shampoo. But one of my biggest marital pet peeves is my husband’s tendency to wait till the last minute and pack the night before a big trip.

This week, instead of asking him when he was going to pack, I just kept preparing for the trip on my own. I packed for the girls and myself, and hit up Target for snacks. I just figured he would pack on his own time like he usually does, so why even bother getting into an argument with him?

My girls are not on a rigid schedule, but they do stick to a routine when possible: for instance, we try to eat lunch between noon and 1:00 p.m., and we eat dinner between 6:00 and 6:30 p.m. to avoid meltdowns. But since we were on vacation, the girls started snacking right before bedtime. And since I’m a stickler for rules, especially when it comes to meal and snack times, it was difficult to sit back and just roll with it.

“Do you think they should eat M&M’s right now?” I asked my husband as he poured popcorn into bowls for our daughters.

“We’re on vacation,” he said, topping off each bowl with a handful of M&Ms.

“But they might be wired, and we have to get up kinda early tomorrow,” I gently reminded him.

“It’ll be OK,” he said as both girls sat on the floor noisily munching on their snack.

I realized that all I needed to do was relax and let it be.

It was close to 9:00 p.m. If I was not actively watching how much I “nagged” my husband, I would have nixed the whole late-night snack suggestion before the candy box was opened. Instead, I pretended to read an US Weekly on the edge of the bed near my daughters to ensure they weren't overdoing it.

I didn't nag my kids or my husband, but I did take the juice boxes away after my eldest daughter nearly finished the container, because I did not want to wake up to urine-soaked sheets. And the second my youngest daughter said “All done!” I grabbed her bowl so quick there was no time for her to change her mind.

Day 3: Keeping My Nagging In Check

If you've been to the zoo with a bunch of small children in the summer, you know how quickly your patience with your kids is replaced by irritation. Today was no exception. It was hot and humid out, and my girls were definitely uncomfortable. My 4-year-old was not impressed with any of the animals that our tour guide pointed out to us during the zoo tour, and she made sure to convey that by repeatedly saying, “Whatever” and asking if she could watch videos on my phone.

I would have been bothering him to fix something he didn't consider a problem to begin with.

I really wanted to tell my husband to talk to her about her attitude, but once I realized that her comments weren't bothering him, I knew the conversation would lead to me nagging him. I would have been bothering him to fix something that he didn't consider a problem to begin with.

Me: “Can you please talk to your daughter about her attitude?”

Me: “She really needs a talking-to, and she is not listening to me.”

Me: “Fine, but you need to talk to her when we get off this bus.”

So instead of nagging my husband, I took a few breaths and let my daughter’s comments slide. I also stopped asking her to change her attitude, because I realized that my husband's hypothetical remarks in our hypothetical conversation were right: once she was off the bus and doing something she wanted to do, my daughter's attitude would change. In the end, that's exactly what happened. I realized that all I needed to do was relax and let things be.

I was shocked to find that I wasn't having such a difficult time not bugging my husband. Maybe it was because we were on vacation and not in our day-to-day routine, but I didn’t have to ask him to pick up his pile of shoes by the bed, or to finally open his stack of mail. I didn't have to ask him to do anything at all. The only real responsibilities we had on this trip were to watch over our girls and have fun. Without the responsibilities of keeping a clean house, packing lunches, and getting to work on time, there was not much to argue about. If I knew he didn't want to do something and I felt it wasn't a high priority, I just let it go. Maybe this wouldn't be so hard after all.

The kids were running around, my husband was relaxing on the bed drinking a beer, and I was silently fuming.

OK, I spoke too soon.

The day before our vacation ended, I really wanted to make checking out of the hotel the next day easy and stress-free. But I was the only one who wanted to pack. I wanted to scream, “Somebody help me get all our stuff together,” but I didn’t. Well, not at first.

After a long day at the Legoland water park, we headed back to the hotel to shower, grab some dinner and watch a movie in the room. By the time we did all that, our room was a wreck and there was stuff strewn everywhere. "I'd like to go back to the room and pack up before we go to sleep," I told my husband during dinner. "That way we can just wake up, pack the car and go." I communicated exactly what was a priority and when I would like it done.

Back at the room, however, it was as if I had said nothing at all. The kids were running around, my husband was relaxing on the bed drinking a beer, and I was silently fuming. I started packing things up for a little while before asking for help, but no one moved. So I asked again, and this time I got some help. But it was only after I “nagged” that my girls and husband helped pack their stuff.

When I finally told my husband about the experiment, he said that he did not feel like I was nagging him a lot during our vacation. When I asked him why he thought that was, he said it’s because we didn't have the stress of work and chores. That might be true, and to be honest, I’m not sure if this experiment would work on normal school days: we didn't have to be anywhere on time, so it was more OK for my girls to get distracted while doing mundane tasks. I feel like nagging is important in keeping my family on schedule, but on days when we are not in a rush and it is not imperative that we leave the house on time, I am going to try to let my kids set the pace and not hover over them.

If being called a nag means having a bedroom floor cleared of shoes and dirty clothes, I'll take it.

Although this experiment might not work on a day-to-day basis, I do feel like it led to an important conversation with my husband about how we can communicate better, so we don’t feel like we are nagging each other. I don't expect to not ever be called a nag again, but it won't be for lack of trying — and hey, if being called a nag means having a bedroom floor cleared of shoes and dirty clothes, I'll take it.