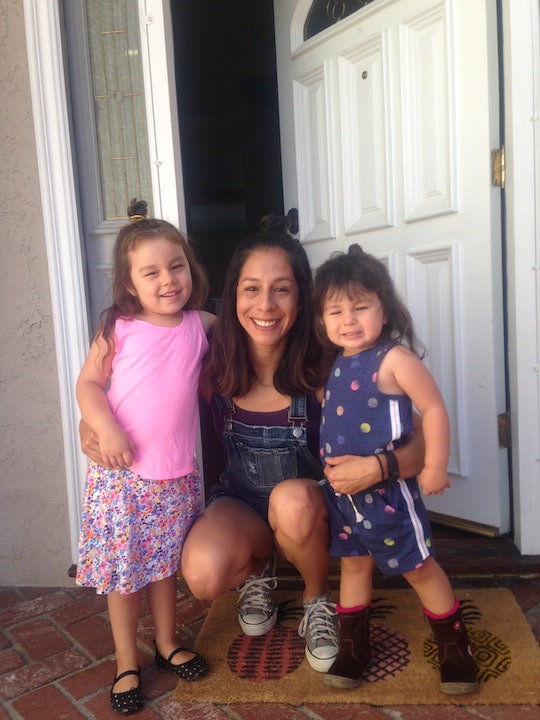 I Tried Passive Parenting For One Week

"Passive" is not a word I’d ever use to describe myself. When it comes to parenting, I’m definitely the rule-maker and the enforcer. If my girls do something wrong, they know that I will hold them accountable for their bad behavior. Now, I’m not expecting my toddlers to be perfectly well-behaved all the time, but if I tell them to, say, not paint each other, then they best believe they will be facing the consequences if I catch them using each other as canvases. Needless to say, I'm definitely not a passive parent. But since I'm not as laid-back as I'd like to be, I thought I could try to be more permissive for a little bit. So I tried passive parenting for one week, and here's what happened.

Passive parenting (otherwise known as "permissive parenting") is defined by being nurturing and warm, but also being reluctant to impose limits on your kids and not strictly regulating their behavior. Since I couldn't be the furthest thing from a passive parent, I thought maybe this would teach me to relax and loosen up a little bit.

For this experiment, I decided not to let my daughters know that I was trying passive parenting for a week. I figured that if I let them know I wasn't going to be as strict as usual, then I was only asking for trouble. Nonetheless, I decided to ease up on enforcing rules and guidelines for my kids for a week, just to see what happened.

Since I’m a stickler for rules, I knew that the first day of the experiment would be difficult. But I didn’t expect my daughters to wise up to the experiment so quickly. Almost immediately, they realized that something had shifted in the house, because I was not enforcing the day-to-day rules.

At breakfast, my girls usually eat granola with yogurt, oatmeal, or a banana, depending on their appetite. The little one constantly asks for other items that aren't on the go-to breakfast list, like mac and cheese or a sandwich. We always gently remind her that those are not breakfast items, which usually results in a meltdown.

I gave in when they asked for candy. I think that's when they figured out something was up.

This morning, when she asked for a turkey sandwich, I gently reminded her that it was not on the breakfast menu and asked her to pick something else. When she started crying, I went in the kitchen and made her the damn turkey sandwich, which she ate happily.

The next day, they took a day trip to Legoland with my husband. It was hot out, so I let them have plenty of ice cream. Usually, I’m cautious about the amount of sugar and sweets my girls consume on a daily basis, so I’m really careful with what they get for dessert after lunch and dinner. But since I was not enforcing my usual rules and was just going with the flow, I gave in when they asked for candy. I think that's when they figured out something was up.

On the third day, I didn't hound my girls to clean their playroom, as I usually do. Instead, I let it stay messy overnight. The next day, I asked my daughter if she was going to clean the playroom today, and she said, “Yeah, but not now.”

"I would really appreciate it if you and your sister could pick up the mess by the end of the day," I told her.

"I will," she said. Guess what. She didn't. I ended up cleaning up the playroom myself, just because I couldn’t deal with the mess anymore.

When I asked my 4-year-old why she didn't pick up her toys, or put her snack bowl in the sink, or practice her dance routine, she was full of excuses: "My feet hurt from walking." "I'm so exhausted." "I need to rest." "I don't want to right now."

It surprised me that my girls broke so many rules, because it usually doesn’t take much for them to follow through on their responsibilities. I mean, when I tell them to clean their room, they usually whine about it, but it gets done. This week, however, they just totally dropped any pretense of doing their chores.

When I asked my 4-year-old why she didn't pick up her toys, or put her snack bowl in the sink, or practice her dance routine, she was full of excuses: "My feet hurt from walking." "I'm so exhausted." "I need to rest." "I don't want to right now." Normally, I would remind her that she is responsible for her own messes and tell her I would help her clean up, but she had to do it too. This week, however, I tried to rationalize her behavior. "Maybe she really was tired," I thought. It was difficult for me to just let it slide, especially because they left a bunch of their crap in my room.

I'm usually the parent who raises her voice or addresses something when things are getting out of hand. So it was tough for me to just walk away, instead of addressing my girls' behavior with them. When I asked my little one to please take off her shoes before coming into the house because we had just spent the day at the park and she was covered in sand, that sassy little thing just looked at me and stepped inside the door. Then when she realized I wasn't going to say anything, she ran to the couch and stood on it with her shoes on, thus breaking another house rule.

It was nice to hear my girls laughing and having fun, but having to clean up a wet bathroom afterwards kinda ruined that good feeling.

Then bath time rolled around. Although my girls know that splashing is usually a no-no in our house, because one tiny splash can evolve into a tidal wave, this week I knew I just had to let them play and splash around. When they realized that I was letting them do something they normally weren't allowed to do it, they went all out. I had to tell them to pull the plug so the water could go down the drain.

I was so done. It was nice to hear my girls laughing and having fun, but having to clean up a wet bathroom afterwards kinda ruined that good feeling.

This experiment was really tough for me. I’m not sure if passive parenting was so difficult because I'm the kind of person who appreciates boundaries, or because my kids took advantage of the fact that they weren't being disciplined. But because I’m not a passive and easy-going person by nature, it was really hard to let their behavior slide.

I'd initially expected my 4-year-old to enforce her own consequences for her behavior, the way she did when I let my daughter choose her own punishment for one week. But this time was totally different. She knew the rules, and she decided to break them because she knew there wouldn't be any consequences. Add a headstrong 2 ½ year old who loves testing boundaries into the mix, and this experiment was really difficult.

Still, this experiment helped me realize that even though I'm a stickler for rules and guidelines, I do have some passive parenting tendencies. While I hold my kids accountable for their behavior, I am compassionate and willing to compromise depending on my child’s mood. I also let them have a say in things like picking their outfits and making their bed, instead of forcing them to do something my way.

I liked that this experiment forced me to spend more time focusing on what my kids were feeling, rather than what they were doing. But while I plan to let my girls have fun without rules every now and then, I don't see myself ever becoming a passive parent. (No judgment to anyone who is, though!).