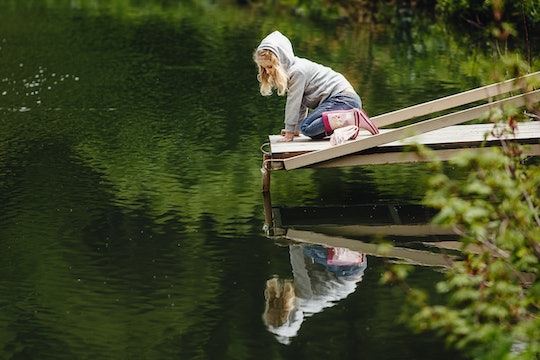 I Stopped Telling My Kids to “Be Careful!” & I’ll Never Look Back

When you have three boys, certain things are just not worth saying. Don’t pick your nose. No running in the house. Flush the toilet when you’re done. Stop kicking your brother in the head. These kinds of instructions go against the basic biology of boys. I don’t even bother saying them anymore. Now that my sons are getting older, I’m adding one more thing to that list: “Be careful!” I don’t say it anymore and I don’t think anyone else should, either. It’s a waste of breath and, more importantly, does more harm than good.

When my first son started walking almost seven years ago, I said “be careful!” a lot. Everything inside and outside of our house felt hazardous, like the world was full of booby traps specially designed for clueless toddlers. As we added more boys to our brood, it only got harder: I was saying “be careful!” all day, every day. Be careful on the couch! Be careful near those stairs! Be careful with those sticks! The opportunities for disaster multiplied with each kid, and it seemed like the only time I wasn’t saying “Be careful!” was when my sons were asleep.

But you know what? No matter how often I said it, my kids still stumbled and tripped and bumped their heads and scraped their knees and wiped out All. The. Time. It was like they weren’t even listening to all my panicked warnings. Then one day on a hike, my youngest son made a beeline for an old wooden bridge (intending to sprint across it) and — naturally — I shouted, “Be careful!”

He stopped, looked back at me, and said, “What you mean?!”

That’s when I realized that my kids weren’t not being careful because they were ignoring me. They had no idea what being “careful” actually meant. Telling them to be careful was as useless as telling them to be purple: they had no point of reference for “careful,” so it was meaningless.

With my son waiting for a response, I thought about how I could actually help him cross that bridge safely. “Check if it’s slippery,” I said, “and then walk, don’t run, to the other side.”

He did exactly that, pleased with his ability to cross the bridge by himself. As I followed behind him, I decided to stop telling my kids to be careful when I perceived something to be risky. Instead, I would try to give them useful instructions to help them judge for themselves how they should proceed (and why). That was about six months ago, and this is what I’ve noticed since then.

Saying 'Be careful!' didn’t actually prevent any injuries, and not saying it now isn’t dooming my kids to a childhood spent in the emergency room.

My kids are more adventurous. My youngest son has always been bold, but my two older sons are typically more cautious; once, at an amusement park, my then-2-year-old was the only kid willing to ride a toddler rollercoaster with me. Now, my older kids are taking more chances, and I think it’s because I’m not inadvertently sending the message that everything in their surroundings is an accident waiting to happen. (For what it’s worth, I bit my tongue a lot.) Instead of shrinking away when faced with something challenging, intimidating, or even scary, my kids observe it for a bit and then decide if they want to try it. Without me fretting in the background, warning them to “be careful!” all the time, they’ve become less fearful of new experiences.

Our injury quota remains the same. When I first decided to stop saying “be careful!” I braced myself for an influx of bumps, scrapes, and bruises. Surprisingly, that didn’t happen. My kids get hurt just as much now as they did before. This means two things: saying “be careful!” didn’t actually prevent any injuries, and not saying it now isn’t dooming my kids to a childhood spent in the emergency room nursing broken bones and concussions. Saying “be careful!” had a placebo effect, basically — it made me feel like I was preventing harm, but it wasn’t actually preventing much of anything.

My kids are more aware of their surroundings. Because I’m not acting as a constant safety net, my kids have learned to assess the safety of their own environment and activities. My 5-year-old will pause at the bottom of a rock wall and ask, “Is this safe for climbing?” Then I ask him questions (“Are the rocks wet? Are there good places to put your feet?”) and he decides if it’s safe or not. My 7-year-old looks out for the younger boys, announcing that a tree doesn’t look strong enough for climbing or that there might be poison ivy in those bushes. Even my 3-year-old — the resident daredevil — will take an extra second to see if the metal slide on the playground is too hot before sitting on it.

People think I’m irresponsible. If you decide to try this experiment out for yourself, let me be the first to warn you... you’re gonna get some looks at the playground. Telling kids to “be careful!” is such an ingrained part of modern parenting that not saying it seems lazy at best and negligent at worst. But let me set the record straight: I don’t stand around with my hands in my pockets while my kids take clearly dangerous risks. I just don’t see the value in rushing to warn them about every potential pitfall and bad idea. How does that teach them to make good choices when I’m not around? I focus on coaching them through things from a healthy distance and encouraging them to stop if they no longer feel comfortable, because I think that gives them the tools to judge their own ability and safety in any given situation.

My kids are way more self-confident. Last week, my normally-timid middle son navigated an enormous arch of climbing bars at the playground by himself, while I stood off to the side reminding him to take his time and look where he was placing his feet. When he was done, he hopped down with a big smile on his face and proudly announced that he was going to go back up and do it all over again. I can climb this now because I’m strong! He beamed. I’ve noticed similar changes in my other kids, too: they don’t whine about not being able to navigate a challenging hiking trail or scream for help when they get stuck at the top of a climbing structure. Sometimes they ask for guidance, and I’m happy to give it, but mostly they figure out how to do things on their own because they believe they can.

Not saying “be careful!” has made my kids more confident, resilient and independent. Those are vital skills they’ll carry with them through childhood into adulthood. Now if I could just get them to stop picking their noses...