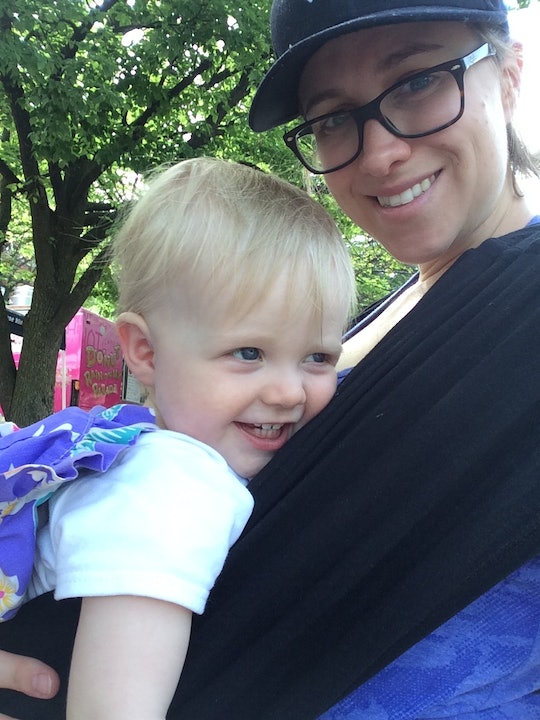 I Talk Openly About My Daughter's Birth Defect, & Here's Why

I have written at length about my daughter’s birth defect: what it is, how it may impact her, what it mean for hers and our lives. I have told my family, my friends, my frenemies, her daycare teachers, her non-specialist doctors, my dental hygienist, and probably any stranger with whom I’ve had more than a five-minute conversation.

My daughter is only 17 months now and I question her ability to fully understand the complexities of her disorders, but when she is a little bit older, I will start to tell her about her brain. I talk openly about my daughter's birth defects because to stay silent about them is harmful not only to society, in general, but to my daughter, specifically.

As the mother of an ACC baby, I have done a lot of research on the subject. While the side effects of the disorder range from the mild to the severe, the more I’ve learned about it, the more I've started to think of its tangible and intangible effects on my daughter's development.

The tangible effects of ACC are things we can see (often caused in conjunction with another genetic or chromosomal abnormality): a delay in reaching important developmental milestones, such as sitting up unassisted, crawling, walking, talking. Some children with severe ACC never reach those milestones, which means they live with seizures, or in a wheelchair.

It is entirely possible to be missing a piece of your brain and to still be "normal."

The intangible effects of ACC, which are a bit harder to see, range from social awkwardness, behavioral issues that look like attention-deficit disorder or hyper-activity, and learning disorders. It's hard to get a grasp on the actual number of people who are affected in this way because the symptoms range widely in terms of severity, and are often incorrectly attributed to classic behavioral problems.

But the most important thing I have learned about ACC is that a person can have all of the above symptoms, or none at all. It is entirely possible for a child to have no corpus callosum and for it to not affect them in any measurable way. It is entirely possible to be missing a piece of your brain and to still be "normal," developmentally speaking.

Right now, my daughter falls somewhere in between those two poles. Although she was diagnosed from an MRI in utero (a diagnosis that was confirmed by an MRI at 4 days old), she's never displayed any cognitive or developmental delays associated with ACC. In fact, her neurologist says that if he didn’t know she had ACC, he would never suspect there was anything "wrong" with her.

As a writer and a mom and a feminist, I have often struggled with the problem of writing about my children, because my daughter has never given me express verbal consent to write about her. Beyond the issue of consent, however, there are plenty of other reasons why I shouldn't write about my daughter's brain: what if, for instance, one day someone reads something I've written and treats her differently because of it? What if a classmate or a teacher speaks down to her or simply treats her as "less than" because of her missing corpus callosum?

But by keeping my daughter's birth defect a secret from others, I am essentially telling her that she has something to hide. And why should she be ashamed of having no corpus callosum, or having any disability at all, for that matter?

I have thought long and hard about what my daughter's birth defect means for the rest of her life, especially because it doesn't look like there is anything "wrong" with her on the outside. It would be very easy for me to decide not to tell her or other people about it, because not telling means she doesn't get to use a learning disability or hyper-activity or social awkwardness as an excuse for her bad behavior or poor academic performance.

By keeping my daughter's birth defect a secret from others, I am essentially telling her that she has something to hide.

But more importantly, by denying my daughter information about her ACC, I would be denying her right to fully understand her own body. For me, this is not just an issue of parenting. This is an issue of body politics. Every person, even a child — especially a child — has the right to authority over their own body, which includes being able to decide who touches them and what they do with their body. To make those types of decisions, they need to fully understand their body.

If I don't tell my daughter about the fact that she is missing a piece of her brain and how that missing piece of her brain might affect her, then she will never be fully informed about her own body. And that seems like a gross injustice to me.

To a degree, I have come to these conclusions from a place of privilege: after all, it's easy for me to say what I will do, without actually having lived it. But I don't want to erase my daughter's differences. I want to embrace them. I want to understand them. I want to educate people who are ignorant about them. And most of all, I want to educate her; I want to teach her that her autonomy and her sense of self are wrapped in that missing part inside of her.

I will always be my daughter's advocate, but I want to teach how to advocate for herself. And so, until the day she asks me to stop, I will talk about my daughter's birth defect. And then, I will shut up and let her speak for herself.