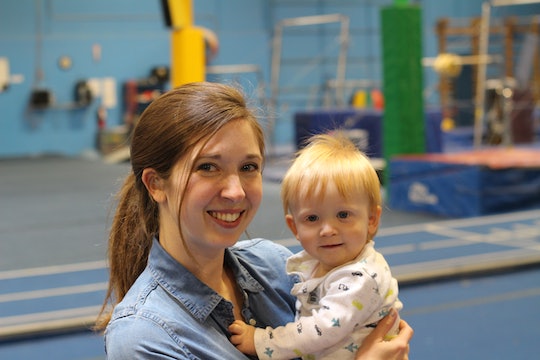 I Thought I Wanted To Extended Breastfeed, But Now I'm Not Sure

My third baby is about to reach his first birthday, and our breastfeeding journey is still going strong. In fact, it’s better than I ever expected it to be. We had a rough start with breastfeeding and I consider it a miracle we ever got to this point. However, now I’m staring down the potential for breastfeeding my last baby much longer than my previous two children, and although I’ve always been fully in support of women breastfeeding their babies, toddlers, and kids as long as they want, now that the time has come for me, personally, I’m not sure I really want to go through with extended breastfeeding.

I've always loved breastfeeding my children. It was a hard-won battle with my first as I learned the ropes, and I constantly felt unsure of myself and my mothering abilities. Breastfeeding was a scary process, but as time went on, it became my favorite part of our bond. It never ceased to amaze me that my body was able to provide everything he needed to live. It made me feel powerful and womanly in a way that nothing ever had before. Part of me never wanted it to end, but around his first birthday, he'd tapered off to only the occasional feed for comfort, and a couple months later, he was done altogether.

So when my daughter was born, there was nothing I looked forward to more than breastfeeding. I'd longed for that comforting bond ever since my son had stopped. She took to breastfeeding like an absolute pro before we even left the birthing room in the hospital. I was able to enjoy our bond from the very beginning, but she was done far before I was ready, self-weaning at only 6 months old. I felt a little defeated each time I had to give her a bottle, wishing that I could have reached that one-year goal again.

As soon as he realized my milk has come in, he was hooked and our breastfeeding experience has been wonderful and fulfilling ever since.

I was elated when my third was born, ready to start my breastfeeding journey all over again. However, things didn’t go quite as planned. After a few fussy feedings lasting mere minutes in the hospital, I was sent home feeling unsure of how our breastfeeding efforts would unfold. I offered frequent feedings, hoping he would take to breastfeeding, but he was dead set against cooperating. He refused to breastfeed for the first week of his life, forcing us to use bottles and formula despite my high hopes to exclusively breastfeed. I had a breakdown in the lactation consultant’s office as we struggled over an hour to get him to latch, knowing that when I returned home I wouldn’t be able to keep up such a difficult routine.

When my milk came in, I was forced to pump to relieve the pressure while he continued to refuse my efforts to feed him. I cried over him often, hoping against all odds that one day it would click, and sure enough, one day it did. As soon as he realized my milk has come in, he was hooked and our breastfeeding experience has been wonderful and fulfilling ever since.

Breastfeeding has taken away part of my bodily autonomy, and after an intense year of on-demand breastfeeding, I am eager to regain my breast independence.

There is nothing I love quite as much as curling his little body next to mine as he breastfeeds himself back to sleep in the morning, or when he nuzzles into me for comfort when he’s tired or overwhelmed. It has bonded us together in a way I am eternally grateful for. I am amazed and oh, so thankful for our past year of breastfeeding, because looking back on that first heart-wrenching week, it's more than I could have ever asked for.

I am aching to feel like my body is my own again.

However, when I look toward the future, and the potential to continue breastfeeding into toddlerhood, I’m not sure I want this to last forever. While part of me can’t stand the thought of giving up this last part of his infancy, there is another part of me that would really like my boobs back. I am tired of wearing ugly, ill-fitting nursing bras and stuffing nursing pads down my shirt at night so milk doesn’t leak all over our bed. I am tired of the uncomfortable looks I get when I breastfeed in public. I am fed up with my husband thrusting the baby towards me insisting that he needs something from me that my partner simply doesn’t have. Breastfeeding has taken away part of my bodily autonomy, and after an intense year of on-demand breastfeeding, I am eager to regain my breast independence.

I love our breastfeeding bond, and I know I will miss it deeply when it's over. Yet at the same time, I am aching to feel like my body is my own again, to have that sense of ownership that has been gone for such large swaths of time between pregnancy and breastfeeding three children over the course of five years. For now, I'll continue breastfeeding, but while I do, I'll be looking at the horizon, where the baby years will be gone, when breastfeeding will be a lovely memory, and my body will be my own again.