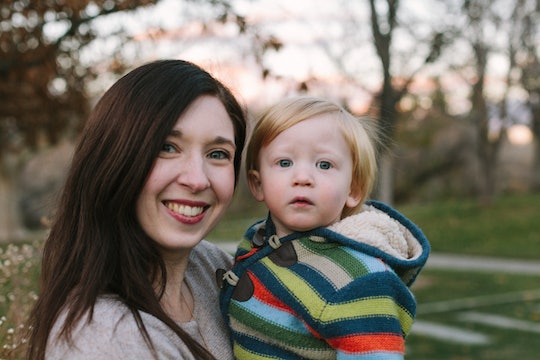 Turns Out, I'm Not Ready To Wean My Baby

I’ve been breastfeeding for what seems like forever. I’ve breastfed all three of my babies for a combined total of around 40 months. That is a whole lot of boob selflessness — and while I’ve certainly loved the experience, there are parts of it that have not been so great. I don’t exactly love wearing nursing bras that end up being three times too big after the engorgement of the newborn stage passes (and yes, I could buy new bras, but I can’t bring myself to buy more expensive ugly nursing bras). I don’t always love being treated like a human pacifier, especially with a toddler yelling, “BOOB!” in public between hysterical sobs. I’m definitely over having two wildly different-sized breasts. So after a year-and-half of breastfeeding my third and last baby, I thought I was so ready to be done with breastfeeding.

For the past seven years, I have either been pregnant or breastfeeding. Or in other words, for the past seven years my body has not been fully my own. It has been housing and feeding tiny humans, without pause, for a very long time. My clothes have been maternity-wear or ill-fitting remnants of my past wardrobe as my shape has constantly shifted to adjust to the needs of my pregnancies and breastfeeding. My undergarments have been milk-stained nursing bras and saggy stretched-out pregnancy panties. I’ve never felt compelled to replace any items because I wanted to wait until I was finally done with the babies and breastfeeding stages.

About a year ago, I could finally see that horizon. Six months after my last son was born, my husband got a vasectomy, solidifying the fact that we were definitely out of the baby stage. I was more than happy to breastfeed for a little while longer, because it was the last bit of the baby stage that I got to cling to. Even as he started to walk and talk, he would still snuggle down with me at nap time and bedtime to breastfeed, and I loved it. I really did.

I wanted to feel independent in a way I simply could not when I was still tethered to my son through breastfeeding.

But another part of me couldn’t wait until my breastfeeding days were over. Every time he would trip and fall, he would scream for a boob, whether we were at home or in a crowded public place. I had no reservations about breastfeeding in public, but being used as a boob pacifier was not how I wanted it to go down. If he was hungry, sure, whip out that boob, but these tantrums weren’t starvation situations. I got tired of feeling like I was only wanted for my boobs. There were more selfish reasons too. I wanted to buy new clothes and new bras, finally reclaiming my body as my own after so many years of dedicating it solely to my children. I wanted the freedom to go away on solo vacations without worrying about my milk supply dropping off or my son not being able to cope without the comfort of breastfeeding. I wanted to feel independent in a way I simply could not when I was still tethered to my son through breastfeeding.

Despite my desperate desire to be done for good, I find myself regretting my decision to wean. While it seems so long right now, in hindsight I know how these stages seem so short — and knowing that there are no more babies in my future makes this even more bittersweet.

As our breastfeeding journey passed the 18-month mark, I started to really consider weaning. I decided once we committed to sleep training (another much-belated milestone) that I would finally commit to weaning also. Despite the occasional boob tantrums, he mostly only wanted to breastfeed at night when we were bed-sharing anyway. Once he was in his own room, I figured it would taper off naturally. I was right. Soon after we started to sleep train he no longer asked to breastfeed before bedtime or naps. When he would wake in the night, he would call for me, but was often uninterested in breastfeeding for comfort. My milk supply dropped off to almost nothing. Now, we go days between breastfeeding. At 20 months, he is almost completely weaned.

Despite it being the longest amount of time I have breastfed any of my babies, it suddenly doesn’t feel like enough. Despite my desperate desire to be done for good, I find myself regretting my decision to wean. While it seems so long right now, in hindsight I know how these stages seem so short — and knowing that there are no more babies in my future makes this even more bittersweet. Each time I do get him to latch, while he is half-asleep and cries out during nap time, I wonder if it will be the last time. I run my fingers through his hair and savor the feeling of his tiny body pressed close and know that when this is finally over for good I will miss it deeply. This last bit of the baby stage will soon be behind me, and it breaks my heart.

Even though I’ve chosen these seven long years of babies and breastfeeding, it doesn’t seem that long at all.