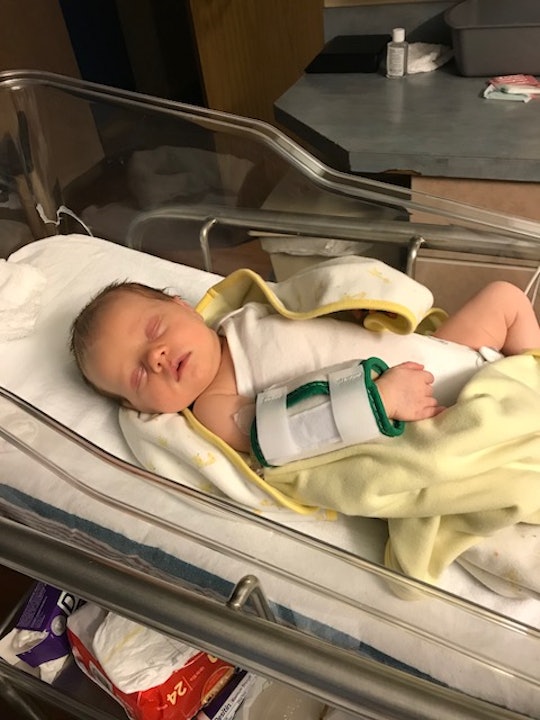 I Thought My Baby Had The Flu, But It Was Something Equally Common & Deadly

By 4 a.m., the sinking feeling that something was wrong had become too strong to ignore. I’d already woken my husband up three times because our two-week-old daughter was not having a good night. It seemed like reflux at first — a little dry cough, gurgles, fussiness and crying. But she kept getting more restless, more gurgly and the cute little cough was no longer cute. And she was refusing to eat. Our toddler had been diagnosed with the flu 18 hours before and I began to panic.

Sitting on my bed, watching my newborn become more and more red as she screamed, I took her temperature. The thermometer beeped and flashed red, breaking my heart.

I got up, grabbed baby D. and swiftly walked into the living room, where my husband was sleeping, quarantined after a day of taking care of a sick toddler. When I told him our 13-day-old had an actual fever, he took a deep breath and told me to just go. I began quickly and robotically packing a bag while sobbing and waiting to hear back from our pediatrician. I was walking out the door when she called back, confirming that we needed to get to the E.R. now.

My husband ushered me out to the car and said goodbye to D and I. My husband had to stay with our oldest, so I went alone.

By 5 a.m., my 7-pound newborn was being held by a nurse on her side while an E.R. physician performed a spinal tap to collect fluid for testing while I sat, useless, a few feet away. Mercifully, I was allowed to touch her and hold her hand while they placed an IV, repeatedly swabbed her nose, put in a urinary catheter and pushed her first rounds of antibiotics.

At 6 a.m. a nurse walked in to tell me the first lab results were in. My daughter was negative for flu. She was positive for RSV.

Respiratory Syncytial Virus, or RSV, is a common and highly contagious respiratory illness that leads to more than 50,000 hospitalizations a year in children under five, per the CDC. In infants, RSV is serious and can be deadly, with about 200 pediatric deaths a year. The younger a baby is, the higher their risk of complications, since infants have immature immune systems. Like the flu, RSV can be diagnosed via a nasal swab. There is a vaccine for RSV but it’s typically only given to infants who were born premature or are especially high risk for other reasons. Parents of infants are advised to seek medical help quickly if their child has "difficulty breathing, a high fever, or a blue color to the skin, particularly on the lips and in the nail beds," all of which can be signs of RSV, according to the Mayo Clinic.

I started taking pictures of my baby, worried she’d get worse and I’d have no photos with her.

At just under two weeks old, any illness would have been extremely dangerous for my baby, but RSV is especially problematic because of its symptoms. RSV is basically a bad cold, but with thick mucus and a fever. Fevers are always emergencies for infants. Any illness that causes a fever can rapidly worsen because of their immature immune systems.

Infants are obligatory nose breathers — they have to breathe through their nose. If you block a newborn’s nose they cannot eat and they cannot breathe. Which are pretty much the only two things they need to do to live.

Both fevers and the inability to eat can lead to dehydration, which can happen quickly in little bodies and causes many complications on its own.

Baby D was hooked up to multiple things, one of which was an oxygen monitor. Over the next few days I laid in a hospital bed, holding her and watching her oxygen level slowly bob up and down around 90 percent. Every hour or so she’d fall below 88 percent and an alarm would sound. Each time I thought this would be it, this would be the time the number plummeted and she’d turn blue in my arms.

Half a dozen times I heard "Code Blue" called over the hospital’s intercom and knew somewhere a child had crashed and a team was rushing to try to save them. I started taking pictures of my baby, worried she’d get worse and I’d have no photos with her.

Regular deep suctioning up her nose with a long, hard, mini-plastic straw would remove the thick blockage and the alarm went off less often. She started to eat again.

It took three days of fluids and suction and medications for her to be stable enough to go home, still sick, but out of the woods. Three days is short for a hospital stay, but five minutes is too long to wonder if your newborn is going to be OK.