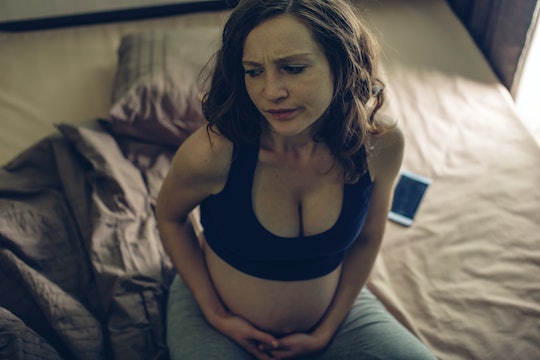 I Thought My Water Broke, But What Was Actually Happening Was Way Grosser

By the time I was pregnant with my third child, I felt like I had this pregnancy thing pretty well figured out. I knew the difference between Braxton Hicks contractions and the real deal. I knew that my labors progressed slowly, so I shouldn’t go in until the contractions were 2-3 minutes apart (since we lived just minutes from the hospital). I also knew I should go in within 24 hours, regardless of contractions, if my water broke. The only thing was I didn’t know what it was like to have my water break spontaneously. It had never happened naturally before. This set me up for quite the ride when I thought my water broke, but I had really just peed myself instead. What even is life.

Late at night in my 39th week of pregnancy, I got up to get myself a glass of water. I was in the nude, because being in my third trimester in 90-degree weather meant I was in no mood for clothing. Especially at night when my sweating was profuse to say the least. I feel like it is vital to say that I had no need to pee. None whatsoever. So when a sudden gush of liquid appeared at my feet, out of the blue (it was certainly mere coincidence that I had just turned on a faucet of running water), I was sure my water had broken.

OK, I was pretty sure my water had broken. Like 80/20 sure that my water had broken. There was enough doubt that I got down on my hands and knees and inspected said liquid, which didn’t smell like pee, I assure you. It was odorless and clearish. (I was well hydrated, I guess.) I cleaned up, went back to bed and woke my husband to tell him my water broke.

“But I’m pretty sure my water broke.”

“OK,” he said before falling back asleep. He did not seem as convinced as I was. I stayed up for hours, unable to sleep, waiting for contractions to descend with a vengeance. Eventually, I fell asleep, and when I woke, there were still no contractions.

After listening to my detailed account (of peeing on the floor), she decided I should come in to be checked.

Suddenly I had doubts. It had been so late at night. I was tired and prone to vivid pregnancy dreams. Perhaps I simply wanted to be in labor so badly that I convinced myself my water had broken. Was there really that much liquid? More than when I normally peed myself? (Which, let’s face it, was a frequent occurrence.) In the end, I settled on yes and yes. It was time to call my doctor.

She asked if I was still leaking any of the liquid, to which I answered with a strong maybe, because at this point in pregnancy everything was kind of leaky all the time. My nipples were leaky. My vagina was leaky. My urethra was basically a broken faucet. There was definitely leakage. After listening to my detailed account (of peeing on the floor), she decided I should come in to be checked.

On the third go, I feel like I probably should have known the difference between peeing myself and having my water break.

There wasn’t much liquid to collect (because I had emptied my bladder into the kitchen), but when she tested, it was definitely pee. I was at a point where I was continually leaking pee. I realized I had spent part of my night wallowing in my own urine, while trying to decide if my water had broke — and had then relayed all of this information to my midwife, who was being very professional about the fact that I was slowly leaking pee all over her exam table.

Had this been my first baby, I still would have been mortified, but at least it would have been an understandable mistake. On the third go, I feel like I probably should have known the difference between peeing myself and having my water break. To my credit: I peed a whole lot on the floor that night. To my discredit: I peed all over the floor and didn’t know it was pee. Luckily, the moment was soon eclipsed, as I gave birth later that week.

There was a moment, mid-labor, when I wasn’t sure if I had to push out a baby or was about to have diarrhea. Thankfully, it was the former. But the uncertainty? It made for a pretty pins-and-needles moment.