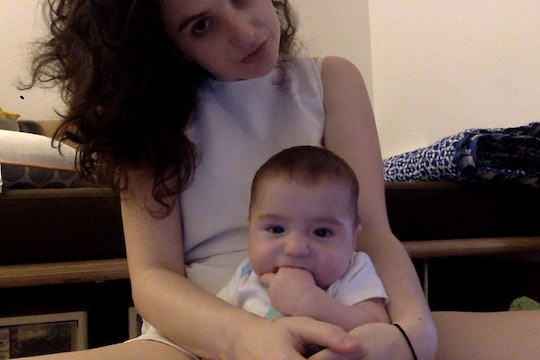 I Thought Weaning Would Be Awesome, But It's Not

Right before my son Sol was born, I promised myself that I would spend a minimum of 6 months breastfeeding him, per the World Health Organization (WHO)'s recommendations. While I was skeptical about the much-touted benefits of exclusive breastfeeding, I didn't want to take any chances on depriving my child of an Ivy League education, so breastfeeding it was. I envisioned myself like the women I'd seen on the pamphlets in my gyno's office: sitting in an Eames chair, my skin glowing and the skirts of my effortlessly chic wrap dress voluminous, my son happily sucking at my breast and my head thrown back in blissful, near-orgasmic contentment.

Of course, none of this came even close to happening (in part because we can't afford an Eames chair), because for me, breastfeeding was sheer hell. My son was premature and never latched, so I spent those first 6 months of his life cleaning out formula bottles and being hooked up to a breast pump while watching The Young Pope. Most of the time, I was incredibly angry: both at society for pressuring me to breastfeed, and at myself because I couldn't do it.

When we started nearing the end of those 6 months, I thought I would be thrilled. But I wasn't. To be honest, I was really depressed about weaning. Even though my experience trying to breastfeed my son was marked by immense guilt and frustration, I was sad that it was drawing to a close.

I never once suspected I'd be sad about weaning. In fact, the morning before Sol turned 6 months old, I literally leapt out of bed, did a little jig in my boxers, and proudly proclaimed to my husband that this would be my last day pumping, so we should celebrate by ordering eggs for breakfast.

I hated everything — everything — about nursing. I hated pumping for hours on end, only to look in the little Medela cylinders and see that I had barely made enough for even one bottle. I hated the rashes and bruises that formed on my boobs when I had to manually express to get more milk out. Most of all, I hated that it prevented me from spending time with my son, especially during the first few months of his life, when I had to pump several times a day to maintain my scant supply while he'd scream for me to hold him. He'd wail and beat his fists and I'd keep apologizing to him, wondering how breast could possibly be best for a baby when it was the one thing preventing me from comforting him while he cried.

Then the evening rolled around, and I was all set to hand Sol off to my husband, for what would be the very last pumping session. I looked at Sol. He looked back at me. And because he has a perfect, sweet little face, that was pretty much all it took.

"Actually," I said to my husband, "I think I'm gonna keep going for a few more weeks. I heard him sniffling the other night, so you know, I can give him antibodies and all that."

Of course, this was bullsh*t; I had been tapering off sessions and was barely producing an ounce a day at this point, so none of the milk I gave to Sol would make a difference. But the mere possibility that I was giving up something that could be helping my son, just for the sake of my own convenience, completely wrecked me. So did the fact that Sol was growing up. He was no longer the tiny preemie I'd exasperatedly tried to latch onto my breast. In a way, that was good, because that period was terrifying. But the knowledge that he never would be that tiny preemie again made me sad.

This is not a particularly novel or trenchant observation, but as my baby gets older, the more I realize that when you choose to become a mom in America, you are also choosing to plunge headfirst into a murky pool of all-consuming anxiety and self-doubt, every day of your life. Regardless of how minute your choices are, or how negligible the consequences might be for your child, you will second-guess them. That applies doubly if the choices you make do not align with our culture's conception of motherhood as being tantamount to martyrdom. There's a widespread belief that if you truly love your child, you will be willing to reduce yourself to a haunted shell of a person for their benefit. Our culture wields our love for our children against us like a cudgel, beating us over our skulls with it, again and again and again.

If you are an intelligent person, this should make you very angry, for many reasons. You should be angry because this idea is sexist. My husband didn't give a f*ck about my decision to wean because he is not under nearly the same scrutiny as I am, because in our culture, if a father so much as changes a diaper, he is awarded Dad of the Year. You should also be angry because it's stupid. Most of the parenting choices we work ourselves into a lather over — breastfeeding versus bottle-feeding, baby-wearing versus strollers, sleep-training versus co-sleeping — have been proven to have zero or negligible effects on the outcomes of our children.

Most of all, though, it makes me angry at myself. I like to think of myself as rational and critical to a fault; when someone presents me with an emotion-based argument, my go-to impulse is to come up with evidence to prove them wrong. The fraught, often hysterical discourse of parenting provides ample opportunity for this.

If I had a time machine and I could travel back in time to six months ago (although to be honest, I don't know why I would do that instead of killing Baby Hitler or making out with the guy I was secretly in love with in high school or something), I would tell myself it's OK to wean. I would say, "Listen, Mom EJ, you are being absolutely ridiculous. Literally no one cares if you stop pumping breast milk, and in a year, you won't even remember how tough breastfeeding was, anyway. All that matters is that you're a good mom to Sol."

I know that pre-Mom EJ is right. But Mom EJ isn't rational, because motherhood, like being in love or being addicted to drugs, is an inherently irrational state; anything that makes you sacrifice your own welfare or convenience for another person or thing is inherently irrational.

A few days ago, when I was on the subway, I felt my boobs, and they were super engorged. (That is one of the benefits of breastfeeding that no one tells you about: it gives you license to touch your own boobs in public whenever you want.) My first thought was: "Maybe I should pump." My second thought was: "Well, actually, maybe I should have a glass of wine and dance with Sol to my Annette Funicello playlist on Spotify instead." So that's what I did, and I haven't pumped since.

Pre-Mom EJ — the rational, snarky, contrarian EJ — is dead. I know that now. Mom EJ, the EJ who will throw all reason to the wind and do virtually anything for her child, reigns supreme. But as much as motherhood is about self-sacrifice, it's also about knowing when to let go. And I guess it took weaning my son to learn that.