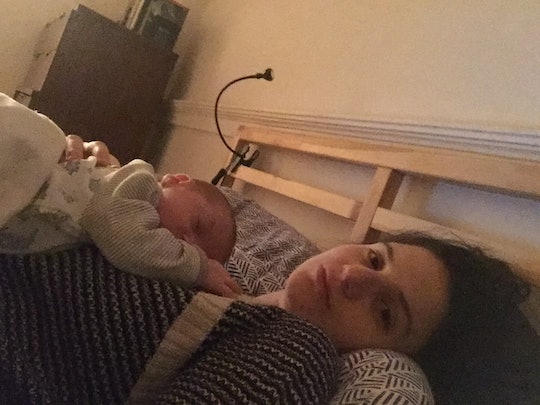 I'll Never Be Able To Breastfeed My Son

A few weeks ago, I was watching The Handmaid's Tale with my husband when we saw one of the handmaids, Ofwarren, casually pop her baby onto her nipple to nurse shortly after she gives birth.

As I watched her baby contentedly suck away, a serene expression overtaking Ofwarren's face, I started crying — not because I sympathized with her plight (Ofwarren is essentially a forced surrogate, and the baby will be taken away from her after she weans), but because it was so divorced from my experience feeding my own child. Because unlike Ofwarren, I hadn't been able to breastfeed my four-month-old son.

Intellectually, I knew that wasn't true. Not every woman breastfeeds, for any number of reasons (my own mother didn't), and not doing so wouldn't preclude me from bonding with my son. But as soon as I said it, I knew that not being able to breastfeed my son had shattered me in a way I hadn't anticipated, and that to a certain extent, it would do so for the rest of my life.

Before I had my baby, I didn't think I would feel this way. I've always prided myself on my ability to give no f*cks, to the point where I've basically built my entire career on that principle. I've written about everything from my politics to my unplanned pregnancy to my post-coital semen disposal methods (which I guess helps explain how the second thing happened). I have been shamed for my life choices so many times that I am essentially impervious to shaming. In fact, I openly court it.

With this attitude in mind, the second I started reading about breastfeeding and the judgment that mothers who formula-feed face, I vowed that not only did I have no interest in breastfeeding, I was going to give my son formula purely out of spite, as a way to give the middle finger to all the mommy-shamers out there.

"I don't believe for one f*cking second that breastfeeding makes a child smarter and healthier," I told my husband.

"You say that now, but you're going to change your mind later," my husband Alex told me. Unlike me, he was breastfed as a baby, and he was gung ho about me doing the same for our child. "Don't you want our child to be smarter? Healthier?"

"That may be true, but do you really want to take the risk?" he asked me.

As it turned out, he was right. The second after I gave birth to my son Sol, I immediately swore that I would breastfeed him. Although I attribute this change in heart at least in part to giving birth at a breastfeeding-friendly hospital, which meant the nurses were overzealous to a fault about providing me with breastfeeding support, I also knew the moment I laid eyes on my child that he would get the best that I could offer him, and if there was even the slightest chance that breast was, in fact, best, then so be it.

But there was a problem: Sol wouldn't latch. He was born a month early, so he went to the NICU two minutes after he was pulled out of my uterus. Every time I visited him in the NICU and tried to nurse him, he would wail and shriek and beat his fists, as if he didn't understand who this crazy lady was and why she was trying to thrust her nipple in his mouth.

I'd tried, I told myself. I'd tried and failed. It wasn't my fault. It's fine. Formula is fine. Everything is fine.

After we came home from the hospital, I saw a lactation consultant, a very nice Orthodox Jewish lady with a soft Australian accent and a portrait of the Lubavitcher rabbi Mendel Menachem Schneerson in her kitchen. She proposed any number of possible explanations for his inability to latch — his mouth is too small, he had a tongue tie, wait no he didn't have a tongue tie, he needed to nurse every hour on the hour instead of when he was hungry, and so on and so forth — as well as a number of breastfeeding products and accessories, which I gamely added to my Amazon Prime queue. But Sol was still refusing to latch, and the costs were beginning to add up. When she proposed that we spend $400 on one of her doula friends to come to our house and give him what essentially amounted to a very expensive deep-tissue massage, I decided perhaps it would be best to stop seeing the lactation consultant for now.

Still, I persisted. I kept waking up while Sol was asleep to pump, and unsuccessfully trying to shove my nipple into his mouth when he was awake. He continued to react like I was tearing out his eyelashes one by one. When his pediatrician asked if he had managed to latch, I said no, and started to cry. She seemed understanding. "Some babies just aren't good at breastfeeding," she said. "You're giving him some pumped milk. Give him what you can for the antibodies, but formula is perfectly good."

So after a month and a half of struggling to get Sol to latch, I officially gave up. I'd tried, I told myself. I'd tried and failed. It wasn't my fault. If anything, it was his. You heard what the doctor said. If some babies just aren't good at breastfeeding, then that means some moms just aren't meant to have breastfeeding relationships. It's fine. Formula is fine. Everything is fine.

I want to be clear that I don't feel like a bad mom because I didn't breastfeed my son, and I don't at all feel like his life is going to suffer as a result of being given formula. In fact, I feel very, very strongly that the health benefits of exclusive breastfeeding are grossly overstated. (In fact, the latest research on whether breastfeeding enhances cognitive development supports that.) I also feel very, very strongly that any pro-breastfeeding advocate who judges another woman for not breastfeeding for any reason, be it medical or emotional or simply because she doesn't want to, is an asshole, plain and simple. Telling an exhausted, battered, overwhelmed, and terrified new mother that she is failing her child by giving him formula is one of the cruelest things a person can do, and in many ways, telling her that she'd only have been able to do so if she'd gotten the necessary "support" is even crueler. Believe me when I say this: with the possible exception of the one piece of bad advice the Menachem Schneerson lady gave me, I got a ton of amazing support for my breastfeeding goals. It didn't help. I couldn't breastfeed. Case closed.

Maybe if you had more support. Maybe if you hadn't given him that bottle of formula when he was 24 hours old and shrieking with hunger. Maybe if you'd paid $400 for an Orthodox Jewish lady to give him a chiropractic readjustment. Is $400 really that much, when your child's future health is on the line?

But if you do make the choice to breastfeed, and you fail for whatever reason, it's easy to feel like you've slipped down to the lowest rung in a very rigid, very stratified caste system. It's sort of like you're a coach passenger on an airplane, peeking through the curtain and watching the people in first class tip back prosecco and doze underneath their cashmere blankets. And all the while, the flight attendants are shouting at you, calling you a failure, telling you what steps you could've taken to have ended up on the other side of the curtain. Maybe if you had more support. Maybe if you hadn't given him that bottle of formula when he was 24 hours old and shrieking with hunger. Maybe if you'd paid $400 for an Orthodox Jewish lady to give him a chiropractic readjustment. Is $400 really that much, when your child's future health is on the line? There are studies, you know. He could've been immune to getting earaches. He could've gone to Harvard, if only you hadn't been so goddamn selfish.

I know that the pressure to breastfeed can be toxic, and that my failure to do so is not indicative of my failure as a mother. But that doesn't mean it hurts any less to watch your fellow new mom friend come over for dinner and shrug off a strap of her tank top, slip her nipple into her daughter's angry mouth, and calm her down in an instant, a beatific expression creeping on her face. It doesn't hurt any less to read the Facebook comments on a story about breastfeeding from mothers trading nipple balm recommendations or anecdotes about how it felt to see their babies' faces smiling up at them for their breast, only to look down and see your own nipple piping up and down, a thin trickle of milk streaming into a cold plastic flange.

It doesn't hurt any less to see bags and bags of milk in your office fridge, while you hold a measly ounce and a half in a Medela bottle in your hand, because your supply is low and the only thing that improves it is eating an oatmeal raisin cookie from the coffee shop on the corner of your office. It doesn't hurt any less to see ecstatic Tree of Life selfies on Instagram, or Hannah blissfully breastfeeding her son on Girls, or nursing bra ads, or Boppy pillows, or your beautiful little boy wailing and kicking while you frantically try to squeeze one more teeny-tiny drop of milk from your stupid useless nipple, wishing that you could feed him the way other mothers do, not just because it would be more convenient (although it undoubtedly would be), but because he would need you, depend on you, literally connect with you in a way that no other two human beings on earth can.

I feel very, very strongly that any pro-breastfeeding advocate who judges another woman for not breastfeeding for any reason, be it medical or emotional or simply because she doesn't want to, is an asshole, plain and simple.

I don't think I failed to breastfeed because I didn't get enough support. I think I failed to breastfeed due to a confluence of different factors — my son's preemie status, for starters, or the fact that he was fed a bottle in the first few days of his life. But ultimately, I think it was because contrary to what sanctimonious mothers and breastfeeding advocates tell you, not every mother can (or should, even) breastfeed her child. Whether or not it was my child's "fault" or mine is beside the point. The point is that breast is not best for everyone. In fact, if you're not a completely heartless person or a rabid ideologue, and you read the countless heart-wrenching stories from moms with low supply or inverted nipples or PPD whose lives or whose babies' lives suffered from their attempts to breastfeed, you'll probably conclude that breast is not best for a great many people.

But in my heart of hearts, when it's late at night and I'm hooked to my pump watching Hulu and I see my perfect little child in his bassinet, his lips fluttering with the rise and fall of his chest, I wish, more than anything, that it had been best for me.

More Like This
9 Reasons Why Some Women Can't Breastfeed
Here’s How Many Calories You Burn When Nursing
10 Ways Breastfeeding Is Good For Moms, Too
How Hot Is Too Hot For Babies? Experts Weigh In