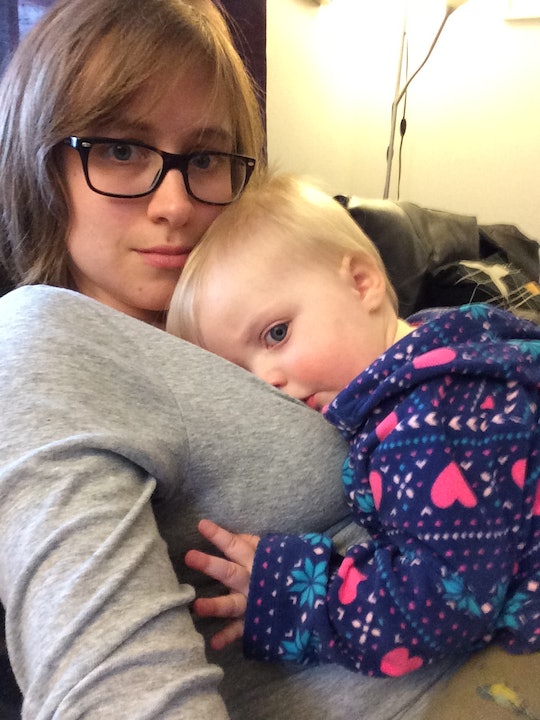 Before I was ever pregnant, I knew that I wanted to breastfeed. And when my breasts started leaking breast milk at six months pregnant, I knew that supply probably wasn't going to be a problem for me. Right now, I'm 11 months into my breastfeeding journey and I don't regret a single minute of it. Not the sore nipples, the painful letdown, the engorged breasts, or the milk stains on everything.

But now that my daughter is eating more solids, waking up for only one night feed, and nursing for shorter and shorter periods than her marathon nursing sessions of infancy, I have noticed a drop in my milk production. And honestly, it makes me sad to feel these changes in my body. So I wanted to know if there were ways to increase my milk supply by trying out a few a common methods. Using a few at-home remedies as well as some store-bought options, I was eager to see if there was a method I hadn't tried yet to make sure I have enough milk for my daughter.

There are a few general rules of thumb for increasing milk supply and they include: hydration (hydration! hydration!), feeding often, and most importantly, not stressing about your breasts (easier said than done). But if you need an extra boost, lactation cookies, lactation teas, and herbal supplements all come highly recommended by the vast collective known as the internet. I tried these three breast milk supply hacks to see what kind of effect they would have on my breasts.

As I am a bit of a Martha Stewart wannabe, I definitely had to make my own lactation cookies. But I was kind of nervous because I had made lactation cookies once before and I found that they tasted a little bit like stale beer. This was due, in part, to the brewer's yeast, which is an active ingredient, along with whole oats, and ground flax seed. It could have been that I'd added too much yeast to the recipe. Or it could be that the recipe wasn't very good. Who's to say?

For this experiment, I tried this recipe from How Sweet Eats, because they were suggested to me by two mom friends and they are literally called the best lactation cookies. Where could I go wrong? Well, first of all, when you put out a call on your Facebook page for lactation cookie suggestions, make sure you explain what lactation cookies are because numerous friends thought they were cookies made with breast milk and I think it grossed them out a little bit — which makes absolutely no sense to me because breast milk is delicious, literally, if you put it in your coffee you would never have to add sugar, it's just the right amount of sweet. But I digress.

The next thing you should be sure to do when you make yourself oatmeal chocolate chip lactation cookies is to buy the right kind of chocolate. Do not buy the unsweetened dark chocolate because it does not taste delicious. In fact, whoever makes that chocolate could probably add a few shots of breast milk to sweeten it up. I realized I'd made this mistake about half way through the recipe when I (obviously) tasted the chocolate and it was so bitter. As I swallowed down that chocolate abomination, I watched my Martha Stewart dreams go up in flames.

I did not have high hopes for my lactation cookies, but when I took my first bite I was pleasantly surprised. These cookies were delicious. They were sweet enough that it balanced my dark chocolate blunder. And they didn't taste like stale beer!

As well as making my own, I was able to find pre-made cookies at a nursing and maternity wear store in my city. These cookies, (Booby Boons), come in two flavors: Cocoa Quinoa and Oatmeal Raisin. And after eating the Best Lactation Cookies, I found these ones lacking. They were pretty crumbly, something to expect from most pre-made cookies. I don't care if it's only your 11 month old in your company, it is still embarrassing to pick crumbs out of your bra. My partner also tried them (in the name of science) and he and I both agreed that we liked the oatmeal raisin more than the cocoa quinoa, but neither bag of cookies was devoured in a record two days. In fact, there are still some sitting on my kitchen counter.

In terms of effectiveness, these cookies produced about the same amount of breast milk as my homemade ones. Maybe it's the Millennial in me, but I'd sort of hoped to see an immediate increase from the cookies alone and when I didn't I was a little disappointed. But when I combined the cookies with the tea, and then the herbal supplements, that really changed things.

I love tea. I could drink tea all day, every day. I have never enjoyed the taste of coffee — it tastes like burning — so when I need a hot beverage or a pick me up or something to sip on the couch or a breakfast beverage, I turn to tea. But I can say, unequivocally, that I do not like lactation tea. The problem with lactation tea is that its main/active ingredient is fennel. Which tastes like black licorice. Which tastes like my tongue dying.

I tried two different kinds of lactation tea: Traditional Medicinal's Mother's Milk and Earth Mama Angel Baby's Organic Milkmaid because I thought maybe one would somehow taste better than the other. They didn't. But, when I choked down three teas a day plus a couple cookies, I did start to see a change in my milk. My breasts felt fuller, which might seem weird to someone who has never had milk in their breasts before, but the best way to describe the difference would be to compare an empty balloon to an inflated balloon. And yes, I did just compare my boobs to empty balloons.

Things really started to pick up when I introduced herbal supplements into my breast-milk regimen. The internet, social media friends, and the sales associate at the natural health foods store all suggested fenugreek and blessed thistle. If you want to improve your breast milk supply, herbal supplements are where it's at. With or without the tea, these supplements had my breasts full to bursting. Forget an inflated balloon. My breasts were more like bags of sand; that's how full they were. They felt like their old selves. They were the Henry Fords of assembling breast milk. They were even a little leaky.

Of these three breast milk hacks, the herbal supplements were most effective, though also the most expensive when I took into account the amount of capsules I'd have to consume on a daily basis. The tea worked well but for me, personally, it wasn't worth choking it down three times a day. That being said, I will probably continue to drink it — though in smaller volumes — until my daughter has weaned. The homemade cookies tasted the best but didn't seem to have much of an effect on my milk production. They have, however, helped me realize I have more in common with the Cookie Monster than I care to admit. But I'd still recommend them to anyone —breastfeeder or otherwise — because they were that delicious.

In the end, I know all of the changes happening to my daughter's breastfeeding schedule are natural and one day she won't need to rely on my body at all for sustenance or comfort. I also know that just because my breasts aren't engorged or I'm no longer leaking breast milk onto my clothes doesn't mean my body isn't producing enough milk for my daughter. The only true way of knowing that is if there was a marked decrease in her weight and hydration. But until I'm ready to wean her or she is ready to wean herself, at least I'll have these hacks for when I my boobs need a boost.