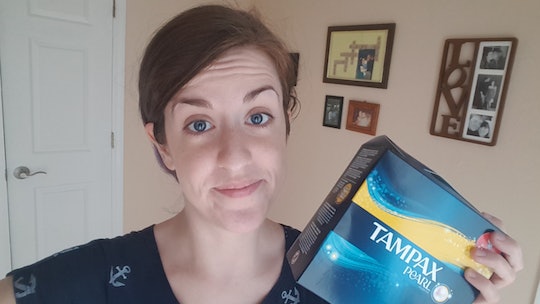 I Tried Free Bleeding On My Period & This Is What Happened

For as long as I can remember, there's been this sort of mysterious aura shrouding the topic of menstruation. When I was in elementary school, it was talked about in excited whispers and curious guesses. Once my friends started to hit puberty, a period was then viewed as a mile marker of sorts, to measure and keep track of who had become a woman and who was still just a girl. Back then I never thought to ask, "What is free bleeding?"; I just knew how humiliating accidents could be. Of course by high school, getting your period was just this annoying event that happened every month and you and your friends rolled your collective eyes at the childish taunts and remarks made by your classmates if you happened to leak through your pad or tampon.

By the time I entered early adulthood, I still felt an odd twinge of embarrassment when purchasing feminine supplies. My brightly colored package of pads and econo-size box of tampons seemed to sit on the conveyor belt for ages as I waited to hastily purchase them and then dash to my car for some chocolate relief. Sure, it may be a bit cliché, but in my late teens I was still very much buying into the social cues that dictated how I, and other women, were supposed to feel and act about our periods.

Not until I was halfway through college, my mind bursting with the realization that not everyone grew up the same way I did, that I began to see a shift in my relationship towards menstruation. I wasn't ashamed of my period and more and more I was seeing that my fellow women weren't either. Recently, with the rising popularity of leak-proof "period panties" and the notoriety gained by Kiran Gandhi free bleeding during a marathon, the notion of period-shaming thankfully looks like it's on its way out.

I was, however, still curious about issues of hygiene and practicality when it came to free bleeding. Friends had already introduced me to the Diva Cup and it just wasn't for me. My combination of scoliosis and a connective tissue disorder just made the whole process uncomfortable and unnecessarily complicated. Yet, now a mother and fully experienced with most every aspect of the feminine reproductive system, the environmentalist and gender equality activist in me still yearned to push boundaries and redefine menstruation on my own terms. So I decided, for better or for worse, I would try free bleeding during my next period.

The concept of free bleeding is fairly simple and pretty much explains itself in the name. Essentially, it's when a woman goes through her menstruation cycle without the use of any feminine products to obstruct or contain the result of her uterus shedding its lining. Sure, people can be squeamish about blood and it's certainly not the easiest thing to get out of fabrics, but it isn't the end of the world, either.

Since my main job allows me to work from home and my secondary job only requires me to be out of the house for a handful of hours a week, I felt I had the luxury of trying out free bleeding. Speaking of luxury, it's also worth noting that having easy access to sanitary pads and the like is a privilege not shared by the entire world. Many women bleed freely not by choice or as a statement, but because it's their only option.

So with underwear I didn't mind staining, plenty of towels for sitting on, and my comfiest (and thickest) pants, I was ready to let Mother Nature do her thing, completely uninhibited.