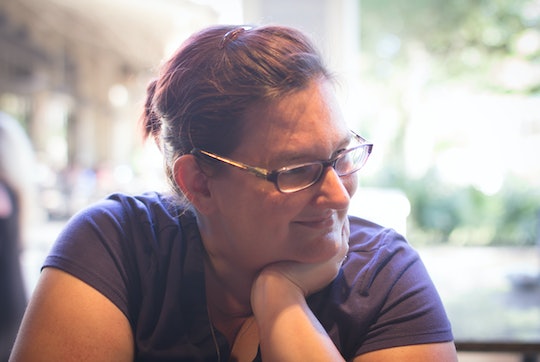 I Tried Hypnotherapy For My Anxiety & Here's What Happened

Much like Tina Fey and Amy Poehler, I have a dope squad of my own when it comes to managing my mental illness and women's health. When I made the decision to go off of some of my medication to prepare my body for pregnancy, they all worked together to help optimize the experience. This exercise led me to a practice called hypnotherapy, something I never took seriously before, albeit never really dismissed either. My therapist first recommended I try hypnotherapy for my anxiety twice in a row, and I figured since she’d been right about so many things before, I really owed it to myself to give it a try. Plus, the meditative nature of the practice drew me in: closing my eyes in a dark quiet place, the deep breathing, the visualizations — for me, it wasn’t too far of a leap to give it a try because I had already believed in the power of meditation.

Hypnotherapy is a skilled verbal communication strategy, which — when used during hypnosis — helps a patient bring about certain feelings, thoughts, behaviors, perceptions, and sensations, according to The National Hypnotherapy Society. And according to The Wellness Institute, hypnotherapy helps people with anxiety by addressing the underlying issues that causes their anxiety. As Diane Zimberoff of The Wellness Institute explains:

By going down to the source of the anxiety we are rooting it out. It’s as if you wanted to get the weeds out of your garden and you did so by cutting the upper part of the weed down to the soil. Now we all know that by doing that, we have not gotten to the root of the weed and it will certainly grown back very soon! Find the roots of the symptoms in a person’s life today and resolve it once and for all.

The transition off of meds was predictably hellish, and my psychiatrist recommended I increase my therapy appointments to help mitigate the increased anxiety. When my therapist of several years first recommended hypnotherapy, I filed it in the back of my mind. I thought it would be like switching out your shoelaces — not something that would dramatically change my life, but maybe something nice to do sometime. However, she had been right about so many other things before, so I wasn’t going to quickly dismiss anything she suggested.

Meanwhile, I continued to see my therapist. A few months later, hypnotherapy re-emerged as a viable treatment option as I described my struggle with nicotine cravings from quitting smoking. Because I would do anything to get the nicotine monkey off my back once and for all (over the years, I had transitioned to a chronic smoker to a “special occasions” one), I finally gave it a shot.

I had two appointments with the hypnotherapist, who was recommended by my therapist but unfortunately not covered by my insurance. The first session was an interview and another was the actual hypnotherapy session. After the session, I was sent home with a 15-minute pre-recorded session that I was to listen to once a night before bed for one month. The recording, which starts with a relaxation exercise, included a series of statements (known as “suggestions”) meant for my subliminal mind, set to the backdrop of white noise. A suggestion, for example, could be: “I no longer tolerate dysfunction in my life,” or “I no longer need to stuff my emotions.”

After about 15 minutes, the hypnotherapist brought me out of the relaxed state and I was able to either go to sleep or resume my day. I wasn’t hypnotized in the cartoonish sense, where I was sleepwalking and making ham sandwiches or anything. Instead, by brain was just in a zoned-out state, optimum for accepting the suggestions. Here are a few things that happened after an initial hypnotherapy session and 30 days of listening to the custom-made recording.

I Am More Intuitive

In my initial interview with the hypnotherapist, she asked where I was feeling my anxiety. It was such a foreign concept at the time, but now I can sure as rain tell you when and where I feel anxiety. It’s typically a burning sensation in my throat or stomach, which I suppose has always been there, but I never bothered to look for. While I never did understand why she was asking me where I was feeling the anxiety, I think the point was to just start being aware of its existence… and it worked.

After my hypnotherapy sessions, I started getting into the habit to immediately identifying and addressing anxiety as it happened. This wasn’t part of my process prior to hypnotherapy, and I credit both the first consultation visit and the reinforced suggestions for forcing me to be more attentive to the sources of my anxiety. When that warming feeling starts building up in my belly, I immediately triage the situation with some deep breathing coupled with introspection. I start to ask myself what is happening in this current situation that is causing me to feel this way. Deeper than the “what,” I also ask the “why” and the “how (can I make this go away).”

I Make Relaxation A Priority

Even though I was only required to listen to the recording nightly before bed, I found myself at times craving the alone time and the relaxation. It wasn’t until relaxation was presented to me in this format that I realized I could take some quiet time for myself anytime I wanted. In fact, even though I’ve never taken myself up on this, I could even run through the tape in my car during the workday. Just knowing that has provided comfort.

Thinking, being, doing — they’re all in the right place and working together. I no longer tolerate dysfunction. I no longer need to stuff my emotions. That is my new truth, and it doesn’t weaken when my will power’s low or crumble when I’m having a bad day.

Now I’m no longer afraid to ask for space for myself or express myself when something is bothering me. Hypnosis for anxiety has taught me to respect the sources of my anxiety, not to try to rationalize or stuff it away. In turn, because I respect it and acknowledge it, I am better equipped to meet my needs, and show others how they can meet them as well. Whether it’s a family or social gathering I’m unable to attend or a miscommunication in the workplace that requires clarification, my challenges just don’t have the same power that they used to have.

I Rewired My Brain

Hypnotherapy literally rewires your brain. By introducing a new way of thinking to my brain, then re-introducing this thought repeatedly, my neurons are creating new pathways, re-setting their default settings when it comes to reacting to certain stimuli. This is what makes hypnotherapy so powerful — rather than a quick fix, I’m thinking differently in lasting ways. If I was heeding the casual advice of a friend, for example, it may be fleeting. “That’s nice,” you think. And maybe it sticks and maybe it doesn’t. But if a suggestion is plugged into your brain by a hypnotherapist while you’re in a trance, it has more staying power.

As Dr. Joe Dispenza explains in his TED talk from 2013,

We have three brains that allow us to go from thinking to doing to being. Each brain is its own individual bio computer, with its own anatomy and own circuitry, its own psychology and chemistry. They even have their own history as well as their own sense of time and space.

Hypnotherapy helps these brains talk together and literally “change your mind.” Instead of being at the mercy of willpower reserves or external life factors that I cannot control, my mind is firmly rooted in the suggestions given to me. Thinking, being, doing — they’re all in the right place and working together. I no longer tolerate dysfunction. I no longer need to stuff my emotions. That is my new truth, and it doesn’t weaken when my will power’s low or crumble when I’m having a bad day.

I Speak Up More

One of the suggestions on the tape was to stop stuffing my emotions with vices such as food or cigarettes. So once I felt that warm feeling in my belly and determined the issue, I was often faced with having to do something about it. This meant talking about my issues. More than talk about my feelings, I had to hold them as legit data points, not something I could be talked out of, not something I had to apologize for. Sometimes talking about my feelings wasn’t the answer, and it was the doing of something that made the tummy burning go away. The name of the game was always to figure out what was making the tummy burn, then how to make it go away without compromising myself.

My work with my hypnotherapist has taught me more than ever the importance of self-care.

I Tried Other New Things

Once I had opened my mind to hypnotherapy at work, I didn’t balk when somebody told me about Himalayan salt lamps. According to Healthyandnaturalworld.com, Himalayan salt lamps are made from blocks of pure Himalayan salt, which come from oceans and are believed to soothe, relax, and help balance artificial frequencies in the air caused by electronic devices.

In fact, I had a brief Google obsession with them over a weekend, which resulted in my ordering one. Better yet, I incorporated the lamp into my hypnosis routine, and it has enhanced the experience. I also started trusting my instinct that aromatherapy really does work for me and that it’s worth looking into. I’m not quite at the point where I’m asking pendulums for crystal recommendations, but I am in a place where I am coming across new things once and awhile and my mind is more open to trying them.

I now believe undoubtedly that hypnotherapy works. While I am not “cured” of my anxiety disorder, I am far better equipped to deal with it. I now find myself coming across other scenarios that could be helped by hypnotherapy. Body positivity? Confidence in the workplace? I may just have to drop in for another visit…

My work with my hypnotherapist has taught me more than ever the importance of self-care. And thinking toward my future, a healthier body means I have a better chance of getting pregnant. It has reinforced an already strong marriage because I communicate earlier and more often when anxiety strikes. Once the baby arrives, there’s going to be a stronger and happier mommy who’s going to be able to handle a whole other slew of challenges. Internalizing self-case through hypnosis has been the most important milestone so far in my trying-to-conceive journey so far, and I'm so happy I tried it.

More Like This
Everyone Told Me To Date Post-Divorce, But Being Alone With My Kids Felt Better
Feeling Flu-y After A Flu Shot? Doctors Explain Common Side Effects
My Toddler Ate Play-Doh, What Happens Now? Don’t Freak Out
7 Baby Name Generators To Try