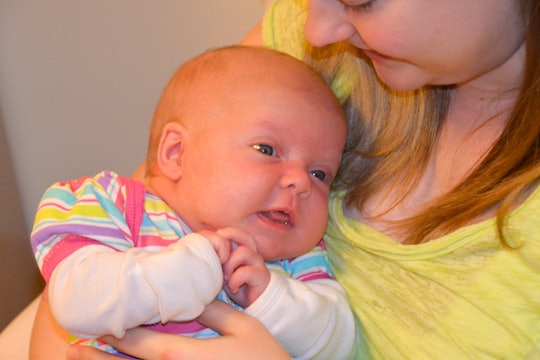 I Tried "Le Pause" With My Newborn, & It Was A Game-Changer

If you ever read Bringing Up Bebe, you'll know about "Le Pause." It’s fun to say, especially in a French accent, but what exactly is it?

I’m willing to bet it’s something you might be doing with your babies and not even realize.

Bringing home my daughter from the hospital when it had just been my husband and me for years, including the dog who didn’t make much noise anyway, was sort of a rude awakening.

Suddenly, the person — me — who slept pretty soundly at night had the world’s most precious gem sleeping soundly beside her and the anxiety ramped up to full force. She would stir and cry out and I was quick to scoop her up, cradling her to me and promising never to leave her again.

I also wasn’t getting much sleep.

The dark of night makes everything worse, and my maternal craving to stop my baby’s whimpering was out of control. I remember looking up advice on Google, probably at 2 in the morning while nursing the baby, and researching if it was possible to die from sleep deprivation. (It wasn’t.)

But I came across articles on Pamela Druckerman's cult parenting book about her ex-pat life in France and the idea of instituting "le pause" seemed so simple, I knew it couldn’t possibly be that easy. Still, I decided to give it a try.

The concept is simply to give yourself a moment's pause when it comes to attending our newborns at night. Druckerman explains that you should give your child a minute or two to calm themselves, or go back to sleep, before you interrupt what is a normal phase of sleep — reawakening, then resettling. Le pause isn't about letting your child cry it out; it's about understanding that sometimes babies let out little cries in their sleep, or because they need to acclimate to their surroundings, and that they need the opportunity to decide if they’re OK or if they need mom or dad.

Because babies are incredibly noisy sleepers. Each little grunt and groan and snort would have me wide awake, ready to snatch her up because for the love, don’t let a baby cry. I wondered if I perhaps wasn’t giving her the time to soothe herself first.

I decided to experiment with le pause and see if it truly helped me to back off and give my baby a moment to settle. It was such a simple idea so I knew I could start immediately doing very little actual research — a bonus for tired new moms. In fact, I began as soon as I could.

The next morning, as the baby stirred and grunted, I shot my eyes open, but forced myself to lay still, risking a peek at her in her bassinet. Her tiny fists were freed from the swaddle and she was waving one around, making those snorts and baby noises that start fading from your memory as they get older. She was fine.

Later that day, as she was in her swing, and I was sprawled on the couch, trying to sleep while simultaneously watching reruns of Downton Abbey, she stirred and cried. I almost went to her, on full autopilot, but, you know, le paused, or whatever. After a few minutes she settled back to sleep and I was able to doze another half hour.

During the days, I became better and better at pausing when she stirred, and slowly started to be able to do it without my heart jumping into my throat every time, thinking something was wrong, or that she needed me right now and was developing abandonment issues.

She was doing just fine and I was able to relax more.

I knew the nights would be harder because it was when my anxiety was at its worst and combining that with being up multiple times to nurse, I was in for a challenge.

Halfway into the night, I was sleeping soundly when suddenly I heard her in the bassinet next to me. She was doing that tiny cough cry newborns are so good at doing, and I felt myself automatically rise to get her. My husband grabbed my arm.

“Wait a minute,” he whispered. I lay back down and we listened her cry for a minute. I told myself if she kept going, I would get her and nurse her. But then she settled down. And I breathed a sigh of relief and relaxed into my pillow, so happy I could sleep a little longer until the next feeding I could have cried myself.

The next time was more of the same. I knew her nursing schedule by now, and when she would wake, I would pause. I would give her a minute to go back to sleep or assert that, yes, she was hungry.

During the day, I slowly learned to relax when I was doing dishes and would hear her cry in the swing or on the play mat. It became a game-changer, and I couldn’t believe how simple it was.

Being a Type A person who battles anxiety, worsening with the birth of a long-awaited baby, I knew how much it took to be able to hold back and give my baby some time. But all of this was teaching us both that sometimes a little time is needed.

Over the next year, our daughter moved from her bassinet to the crib in her own room. We were separated by a wall and therefore, I could still hear almost all her stirrings and cries. I needed the reminder from my husband periodically to give her a moment to settle, but it soon became somewhat of a new routine for us. And it was so delightfully easy, I couldn’t believe it actually was working.

My daughter is now 2-and-a-half, and while she didn’t sleep through the night for quite some time and still even now makes random appearances by the side of my bed, I learned that for my family, it wasn’t about getting her to sleep through the night by a certain age. It was more about giving her that independence, even at two weeks old, that she can learn to settle and if she needs me, I will be there. I learned how to pause to my own anxiety in a sense — learning that much of the time, there was nothing wrong.

More Like This
Should You Swaddle Your Baby In The Summer? Here’s How To Dress Them
21 Earthy Baby Girl Names For Your Little Force Of Nature
20 Perfectly Proper Tudor Baby Names
Why It's Crucial to Get Good Sleep As A New Mom — Plus, Tips On How To Do It