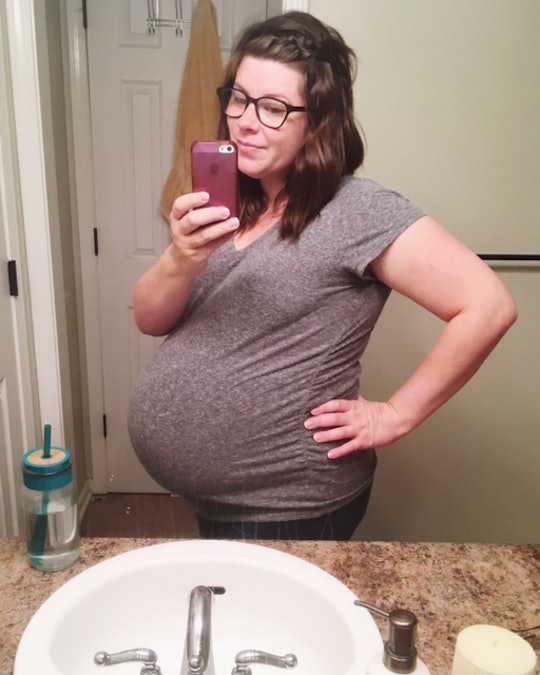 I Had My Membranes Stripped To Induce Labor

I like to joke that I’m a little too good at being pregnant because I always carry past my estimated due date. My first pregnancy ended with an induction at 41 weeks. I could hardly believed it when my contractions started at the end of my due date during my second pregnancy, but my second child also arrived just one day “overdue.” When I was pregnant with my third a few months ago, I was so hopeful that I'd finally deliver right on time, or even a little bit early, but I didn’t get my wish. I didn't go into my pregnancy thinking that I'd need to try out any natural means of inducing labor like getting my membranes stripped to induce me or even snacking on spicy foods, but as my due date crept closer, I wasn't totally against trying them out.

I’m so grateful to have had three healthy pregnancies and to have been able to carry my kids to term every time. But in the thick of it, when you are hugely pregnant and it’s 90 degrees outside, it's hard to happy about much of anything. Once I hit full term, which is now considered to happen at 39 weeks gestation, I was so fixated on wanting to meet my baby and wanting to be through with pregnancy. So, when my doctor suggested a membrane sweep to try to kick start labor, I was completely on board.

Membrane stripping is a procedure that can be done during a routine prenatal examine. According to WebMD, a doctor uses their fingers to sweep between a mother's sac of waters, separating the amniotic sac from the wall of the uterus. This process is said to trigger prostaglandins, which play a role in controlling labor. A membrane sweep doesn't work every time, but it's associated with decreased likelihood of carrying past 41 weeks when performed on women who have reached their due date, according to Cochrane.

My third pregnancy was my hardest pregnancy. I dealt with prenatal depression for the first time ever and my physical symptoms seemed never ending. I threw up off and on for most of the pregnancy, slept sitting up to try to keep my heartburn under control, and had carpal tunnel in both of my wrists. By the time I hit 40 weeks, I was having so many irregular contractions I was sure I'd be having my baby anytime.

Even though I was desperate to give birth, I was feeling really unsure about the whole thing. To be perfectly honest, I was afraid and was already thinking about saying no.

I nearly cried when my doctor told me I was only dilated to 1 centimeter. All of those contractions had meant nothing, or at least it felt that way. As irrational as it sounds, it felt like I would be pregnant forever. That, like my first, they would have to induce my labor. I was so discouraged. I spent the next several days doing everything I could to jump start labor. I went for a walk everyday, sometimes twice a day. I drank red raspberry leaf tea nonstop and even dug my breast pump out of storage to see if nipple stimulation would do the trick. Nothing seemed to be working. I was still having contractions all of the time, but they were unpredictable and would taper off if I fell asleep or changed positions.

I laid there on the table and I laughed, so relieved was I when my doctor told me I was nearly 3 centimeters dilated. When she asked me about membrane stripping, I said yes without thinking twice.

Walking into my doctor’s office for a follow up appointment at 40 weeks and three days, I honestly didn’t know what to expect. She'd told me that she would do a membrane sweep if I was at least 2 centimeters dilated, but I wasn’t getting my hopes up. I also had a lot of questions about the procedure. Earlier that week, my mom had called me trying to convince me to wait it out, to not try the membrane sweep. My aunt had carried over by several days during one of her pregnancies and had tried membrane stripping and said it was one of the most painful things she'd ever experienced. So, even though I was desperate to give birth, I was feeling really unsure about the whole thing. To be perfectly honest, I was afraid and was already thinking about saying no.

I laid there on the table and I laughed, so relieved was I when my doctor told me I was nearly 3 centimeters dilated. When she asked me about membrane stripping, I said yes without thinking twice. I knew if I was dilated to 3 centimeters I was so close. It hurt, but it wasn’t unmanageable. I'll be honest, it was toe-curling, gripping-the-table kind of pain, but it wasn’t so bad I couldn’t get through it.

And it was worth it, too. Later on that day, right after getting my kids ready for bed, my contractions started up and I could tell they were real this time. I could tell I was going into labor. They were regular enough to time on my phone and steadily grew closer together. Around 11 p.m., my water started leaking, my mother-in-law came over to stay with our big kids, and we packed up and drove to the hospital. My son was born at noon the next day, four days past his estimated due date.

I know that membrane stripping only works 25 percent of the time, and the chances of it working are even lower if you aren't yet past your due date. I know there is probably a chance I would've gone into labor on my own, but I am choosing to believe that a membrane sweep was what started my labor. If I ever get pregnant again, and if I ever carry past my due date again, you better believe I will be give membrane stripping another chance.