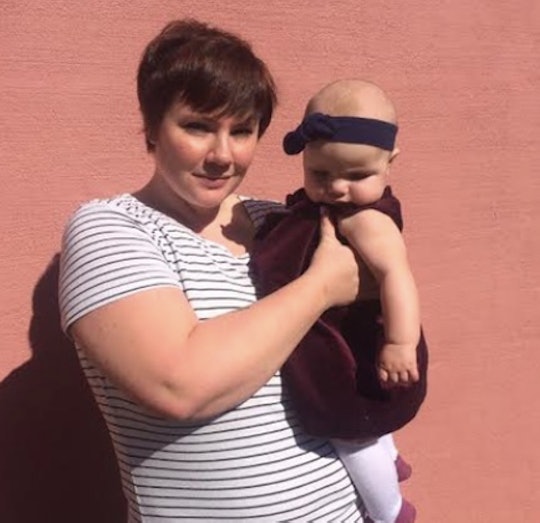 The first I'd ever heard of a parenting style known as metric parenting was a couple of months ago, and I was interested in trying it out simply because I've always enjoyed checking off lists. Most of the lists I make, however, only get checked off halfway — that is if they even get made completely. I like to pretend I'm super efficient and diligent in life, but the truth is I'm usually winging it. Motherhood has been no exception.

So I guess that's why the idea of metric parenting appealed to me: you give yourself goals, write down ways to achieve them, track how you do, and then celebrate your successes. In order to understand the method, you need to know its roots. And the parenting "strategy" began, in part, with help from Catherine McKenna, Canada's Minister of Environment and Climate Change. According to Fast Company, McKenna announced she'd be leaving the office at exactly 5:30 p.m. every day of the week except Thursdays. She said she'd be offline and unreachable until 8 p.m. in order to have dinner with her 11, 9, and 7 year old children and to help them with her homework. After 8 p.m., McKenna said, she'd check back in. But the term "metric parenting" was coined by Fast Company author Reva Seth, who wrote that metric parents employ the same tactics used to meet goals and deadlines at work to aspects of their family lives.

In my own personal life, I saw metric parenting as way to visualize some of the goals I had for being a mom at this stage. Maybe utilizing this systematic approach could help me turn how I want to parent my young daughter into some real results I could analyze, review, and check in on. Despite my efforts not to turn the art of motherhood into an exercise in self-quantification, I'm still almost constantly thinking about what I can or should do better. Instead of letting that bother me, though, I decided to channel the desire to do things I've been wanting to as a mother into a specific game plan I could execute.

I sat down one Saturday night and wrote out my goals and action plan for the next seven days. My main goals were to:

I came up with ways I could accomplish these goals as well. To talk to her more, I would describe the things I was doing every chance I could. I aimed to read to her five out of the seven days. And I would talk about things on the screen if the TV was on. In order to spend less time scrolling on my phone while she played in the floor at home, I decided to leave my phone in my bedroom until after she had her morning nap. Lastly, so she could get around some other babies, I determined to go to our local library's story hour for babies that I had been meaning to take her to for weeks. I also decided to try to plan a play date with another friend with kids for our baby girls.

I felt confident going into this experiment because I'd actually written down the things I wanted to do. I gladly left my phone on my bedside table when my daughter woke up for the start the day, and I felt really good about that decision. After her nap was over, I texted my friend about getting our girls together. On an average day, I naturally describe things to her as we're doing them, but today I made the extra effort to do it even more detailing — explaining the type of cereal she was eating, telling her what fruit I was mixing in with it as I prepared her breakfast, and explaining why these things were so important for her.

We weren't at home much on day one to watch TV, so I didn't have to think about that, and when it came time to put her to bed, I realized I hadn't read to her yet, but I still had six more days to fit that in.

Our routine on day two was normal: my partner went to work and I stayed home with our daughter. I usually let her watch a cartoon on Netflix called Sarah & Duck after breakfast or lunch. I know she's only 8 months old, but she's loved watching the colors and listening to the sounds on the TV since she was 2 months old. I've sometimes feared I'm raising a TV junkie, but talking about what's on the screen and seeing how she recognizes and enjoys the Sarah & Duck theme song made me feel better about it.

By this point I realized that if I wanted to make reading to her five out of seven days a week a reality, then trying to do it in the evenings was a bad idea.

Likewise, talking to her about the colors she's seeing and naming and pointing at the animals, characters, and items on the screen certainly kept me from zoning out on my Instagram feed, too. It was a good reminder for me to be present in the moment (a staple of the metric parenting style). Before this experiment, I've only sometimes read to her before bed, but because of my goal-setting this week I knew I had to make the effort to do it more often.

It didn't take me long to realize that describing things to her was something I actually did quite a lot. Making it a part of my metric parenting experiment helped me to see it wasn't something I needed to make sure I plan and that I could pat myself on the back in that area already.

But by day three, I could tell being on my phone was something I still needed to work on. I couldn't check off that I'd left it in my room on that morning, because I didn't. I didn't read to my daughter on day three either, because we were out in the evening, so I put her to bed with our normal routine of changing into pajamas and singing to her while breastfeeding as soon as we got home. I had wanted to add reading to our nighttime routine, but reading to a fussy baby because she's tired isn't my idea of success. I felt bad for a moment, but quickly shrugged it off with better intentions for the next day.

I wanted to be able to check off that I wasn't on my phone that morning, so I left it in my room with gusto like the first morning. It felt good to not be tied down to my screen. Letting her hear extra vocabulary was a success, and I invited my husband to describe things around the house for her with me and I talked to her all about the laundry I did that while she watched me in her walker. Unfortunately, reading to her didn't happen again as we were out in the evening once more. I knew I needed to change my plan for the next day if I was going to succeed in this area.

Some people like coffee. I like Instagram. And if my baby is happy to play on her own, and she's not crying for food or some other reason, I'm not going to beat myself up for being on my phone for a little while.

By this point I realized that if I wanted to make reading to her five out of seven days a week a reality, then trying to do it in the evenings was a bad idea. I hadn't realized how many evenings we'd be out, and the night before was a spontaneous meet up with a friend who'd come into town. So I switched to making sure I read her a book sometime during the day on day five and for the rest of the week, and it worked.

On day five I took her to the library to be around other babies and toddlers, which she loved, and made me feel good since she's at home with me more often than not. Day five was also another triumph for being phone-free for a few hours first thing, too, as going to the library was a morning activity we spent together.

For me as a stay-at-home mom, social media is the thing that easily makes me feel, well, more social without having to put a bra on and get the baby out of the door. Needless to say, the goal of being off my phone in the mornings wasn't met this day or the next. I also realized that if I want to scroll through my feeds in the morning, it's likely because I'm needing a little extra help getting going that morning. Some people like coffee. I like Instagram. And if my baby is happy to play on her own, and she's not crying for food or some other reason, I'm not going to beat myself up for being on my phone for a little while.

Like I said, reading to her went so much better during the day: she was awake and excited about the books, and we had fun together. I didn't even see talking to her throughout the day as a goal to check off anymore, because it came so naturally.

By the end of my experiment, I knew I hadn't accomplished everything I'd set out to do. I had texted my friend earlier in the week, but a playdate with another baby sometimes takes more than a week to plan, and we ended up scheduling for the following week. Reading to my daughter four days out of seven isn't the five days I'd hoped for, but it's still more than I did the week before, and I got the idea of reading during the day instead out of this experiment. So I decided that all the recording of my daily tasks still deserved to be celebrated. My husband and I planned for my mom to babysit our daughter, and we had a few hours all on our own the last night.

Did This Experiment Change Anything?

Trying out this method of parenting — even for just a short week — made me realize that for me it's not so much a way of parenting as it is a way of organizing my thoughts towards my parenting. Metric parenting helped me focus on my goals and tasks. I could see that I thought a lot about what I did and didn't do in this process, which made me feel good sometimes (like when I realized I was already doing better than I thought in the area of talking to my baby) but also made me feel bad about myself other times (like when I couldn't live up to my goal of staying off my phone in the mornings).

The great thing about it, though, is that I can change my goals as I see fit, so recognizing what I need to do and why is totally in my hands. I'm never really failing, because if I'm not accomplishing the goals I've set, I can reevaluate and change that goal instead of beating myself up for it. I think for now at my baby's age, I probably won't check off a list each week. But I will definitely take what I learned out of it into the way I see my parenting. In a couple of months, I can see myself using this strategy, though, if I feel like there are different things I'd like to do better. I also definitely think it's something I'll revisit in the future when my daughter's older and there's potentially more children in the picture. For me, it was a great way to make my parenting intentions a reality, and that's definitely a success in my book.