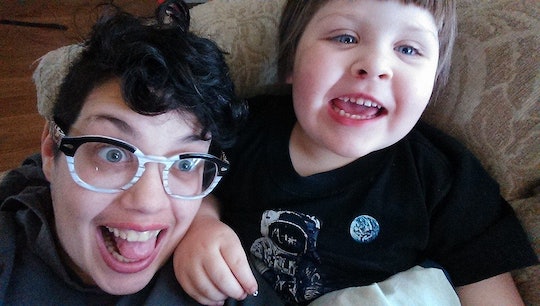 There are a million ways to do parenting well, but you can never really be sure if you’re doing it perfectly. There's constant pressure on you to be the very best parent you can be: better than your parents were, better than that mom at your play group, or even better than you were five minutes ago.

Fortunately, there's always another hip new model of parenting to try out. A few months ago, I stumbled across mindful parenting, which is basically the practice of parenting your kid(s) with an emphasis on being engaged and non-judgmental in the present moment. Mindfulness involves being hyper-aware of your emotional and psychological state and taking ownership of that state: for instance, if you're angry, admit to yourself that you're angry, then try to figure out what to do next.

In the past, I’ve found mindfulness incredibly useful in coping with anxiety and depression. But I hadn’t yet tried to apply it to parenting, and I hadn’t actively encouraged my kid, Arthur, to practice mindfulness either. So I decided to try out mindful parenting for myself for a week. Here’s what happened.

To engage with mindfulness, you need a lot of self-compassion, as well as the ability to be brutally honest with yourself and others. You also need a large emotional vocabulary, which concerned me a little bit when I thought about practicing mindful parenting with Arthur.

Arthur is five, and a 5-year-old is nothing if not brutally honest and compassionate. But I wondered if he and I had the emotional vocabulary part down pat. After all, I am not a patient person by temperament, and he has told me multiple times that he doesn't like talking about his feelings. It wouldn't be easy, but nonetheless I decided that for seven days, I'd approach his mood swings (and mine) with as much mindfulness as I could muster.

I woke up thinking about mindfulness on the heels of an anxiety dream about being bad at it, which wasn't a great start. In the morning, before work, I kept asking Arthur how he felt until he told me I was annoying him. I repeated the process when I got home after work.

I was so focused on being mindful of Arthur's feelings that I was totally ignoring them in the process. Basically, I was too obsessed with the experiment about mindful parenting to either be mindful or parent.

I was too obsessed with the experiment about mindful parenting to either be mindful or parent.

Day 2 was uneventful. There was playing. There were cuddles. It's easy to be mindful when things are going well.

On Day 3, however, I had to step up my game and actually put mindfulness skills to use. Bedtime was hard, because there was a slight change in routine: one of Arthur's parents suffers from chronic pain, so they had to bow out of getting him ready for bed. Arthur didn’t handle the change well, and immediately burst into tears. When I asked him what was going on, he climbed in my lap and said things were scary.

“I’m sorry you’re scared. Being scared is really hard," I said. "Can you tell me what’s scary?”

“I don’t know what will happen," he told me.

“Let’s think about it," I said, keeping the practice of mindfulness in mind. "You’ll take your asthma medicine, then you’ll brush your teeth—"

He looked up at me and sighed. “I wanna act it out.”

“That will make you feel better?”

So we acted out his bedtime ritual. Twice. Only then did he feel OK enough to do it.

On Day 4, Arthur got carried away while we were wrestling and ended up slapping me in the face. We had to have a talk about it. He felt bad about it, and went to his room by himself for a little while of his own volition. I went to check on him, but he was still clammed up. I asked him how he felt, and he said he didn’t know what to say; when I pressed him on this, he admitted that not knowing what to say scared him.

We used The Color Monster: A Pop-Up Book Of Feelings to start to put words to how he felt. Like the monster in the book, he said, he started with his blue feelings (sadness) and black feelings (fear) all tangled together. From there, we could talk our way to both of us feeling better and happy again.

Over the weekend, I became obsessed with a new video game and played for several hours straight until Arthur appeared next to me and said, “Baba, you should shut your computer and hang out with me.”

He was standing right in front of me, his eyebrows drawn and his hands on his hips. I saved my game and shut down my laptop. I asked him how he was feeling. He described it in colors because he didn’t have words: blue and red. He was angry and sad because I had been so distracted.

I listened. I made myself listen, which was not easy, because I wanted to defend myself. Yet he was so present and so engaged and communicating so well with me.

"Thank you," I said to Arthur. "I'm sorry for ignoring you." Then we started playing together.

By the end of the experiment, I realized that Arthur was so much more mindful and emotionally present than me. What he lacked in an emotional vocabulary, he made up for with his creativity and willingness to describe his state of mind for me.

Mindful parenting took a lot of effort and a lot of patience, as well as a lot of humility. Having a 5-year-old call you out and force you to stop and reflect on your actions and admit to yourself that yes, you are not doing your best, is eye-opening. It’s not easy to hear from your child that you're not parenting well at a given moment, but the point of mindful parenting is to hear his words and grow from them. And in the end, it was worth it.

More Like This
10 Ways ‘Workin' Moms’ Is Basically A Crash Course In Parenting
From Captions To Gifts, These Are All The Kindergarten Graduation Ideas You Need
Ashley Graham On The “Fun, Organized Chaos” Of Raising Twins
These Stepmother's Day Instagram Captions Are Straight From The Heart