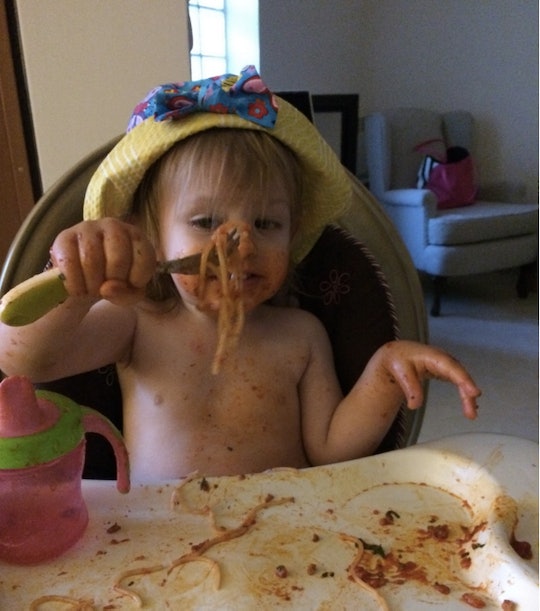 I Tried Parenting Like An Italian For A Week, & This Is What Happened

Do you ever wonder how other cultures parent? Parenting in America is such a hotly contested topic that it seems there’s always something being discussed or debated. New parents are instructed to read books, learn the different “methods”, and receive tons of unsolicited advice from others with a smile. I’ve been living in Italy for over a year and a half now, and I can confidently tell you one thing: I certainly don’t hear these types of conversations going on here. Parenting in Italy seems very traditional, with child-rearing advice passed from generation to generation. Raising children here is treated with an “it takes a village” mentality, and I was eager to give parenting like an Italian a try.

In preparing to write this piece, I came across an article that basically mentioned what I already believed: Italian parents don’t intervene during tantrums, they just let them play out. I have Italian neighbors with four kids under 5, and I hear their tantrums play out all day long. The Italian parenting style is also very much “the bambino gets what the bambino wants”. Observers might actually think that the child is the parent and not the other way around. Breastfeeding is huge in throughout Italy, and typically treated as the “only” way to feed your child. In Southern Italy, where we’re living, formula-feeders are typically frowned upon unless they’re doing it medical reasons (and even then you might get a side-eye). And if you go to the market, you won’t find much variety in formula, either. In Northern Italy, breastfeeding is treated a little differently, though, due to socio-economic status.

Every night, and in every restaurant, you’ll find the babies, toddlers, and older kids dining out with their families and running around the restaurants. Unlike American parents, who expect their kids to stay in their high chairs and be quiet (and in the '80s, parenting meant a TV and a TV dinner), Italians love children — and they love them loud. Moms and dads don’t do date nights like in the States; in Italy, the kids come along.

For a week, I decided I’d live like the locals, adopting and trying at least three popular Italian parenting habits every time we were in public:

2. Taking my toddler out to a restaurant with mom and dad later than I would in the States

3. Letting my daughter tantrum in public without intervening

Did parenting like an Italian work better than my American methods? I'd already seen how parenting like the French was different than American parenting methods, and I was curious to see how Italians approached things differently. Would it make living in Italy easier, to live like the Italians did? Or would I miss what sets raising kids in the U.S. apart?

I gave it a try, and here's what happened.

Breastfeeding in Italy and Europe in general is widely accepted and approved of, with a few hiccups here and there. It gives me comfort to see so many Italian mothers breastfeeding in public because I’m still nursing my 2-and-half year old. When she wants to feed in public, I get virtually no flack, no side-eye, no “what are you doing?” looks of disgust. Nursing in public for a week was a total breeze, and I loved it. It’s just one of the many positives of living in this country that I adore most. No one makes me feel guilty for nursing a toddler; instead, they encourage me and help to reaffirm my decision.

My daughter was 10 months old when we first got here, and since then I’ve nursed her at the Vatican, in front of Pope Francis, in five-star restaurants, and even in front of the statue of David in Florence. Not once has anyone ever said anything to me. Instead, I get approving glances, smiles, nods of understanding, and complete graciousness — especially from the “nonnas” (Italian grandmothers). At a public park near a bus stop, no one even paid attention to me as I nursed — except maybe to wonder why my friend was snapping a photo.

Interestingly enough, the one and only time I felt like someone was giving me side-eye while nursing my child in public was in the company of an American tourist. Go figure.

Experiment #2: Restaurant Outing With A Toddler

I am not going to lie even a little bit, eating out with my toddler in tow probably stressed me out more than anything. I don’t know anyone who likes to go out to eat with friends and their toddler — except Italians. A toddler has the attention span of a puppy, and the energy of one, too. Do you know how hard it is to keep a kid that age entertained at the dinner table? You can bring all of the crayons and paper you want, but eventually it gets old, and all that the kid wants to do is break free from their high-chair prison and run around touching stuff.

You can imagine how much “control” I had to relinquish to let this experiment play out. Add to this the fact that Italians aren’t dine-and-dash eaters, and there’s not a Denny’s anywhere out here. Meals takes time to be served: the food is usually made fresh and it doesn’t come out all at once. Going to dinner means settling in for a two-to-three hour affair … at least.

It started out easy enough: the bread the waiter brought out seemed to make her happy for a bit, but eventually, she just wanted to stand up in her high chair and observe her surroundings. Instead of getting all, “Sadie, sit down! You’re gonna fall over and die!” I just let it happen. When her pizza came out, she pretty much ate it the way any toddler would: shoving it straight in face. By the time my spaghetti frutti di mare (that’s code for spaghetti with seafood) came out, her pizza was old news and my pasta was looking pretty good. The food entertainment only lasted for so long before she was itching to break free. Instead of feeling like I needed to constantly entertain and watch her, I did what the Italians would: I just let her go.

This girl went up to the first stranger she saw, who happened to be a sweet Italian woman, and climbed right into her lap, all the while shooting me a mischievous grin that screamed, “Look lady, I can trade you in anytime I want!” The Italian woman ate the whole charade up.

Letting her stay with the strange woman (who was totally nice and friendly) was hard for me. I know it was a safe environment, but I come from a society full of paranoid parents and “stranger danger,” so it wasn’t easy to shake the fear. After 10 minutes, I went and picked her up, redirecting her in hopes she’d go play with the other kids. She did. We spent the rest of the evening watching her run around the restaurant, zig-zagging between the wait staff and strangers, exploring everything she could. It was surprisingly relaxing, and to be honest, it’s one of the parts of Italian culture that’s growing on me most. My daughter is safe here — not safe enough for me to entirely ignore, obviously, but life here is different; it’s slower.

On future outings, I’ll do my best to just relax and let her be a kid without forcing “proper American behavior” on her.

Experiment #3: Letting a Tantrum Play Out

When your child is having a tantrum in public, the last thing you’re thinking about is pulling out your iPhone to snap a few pics. So this photo of Ms. Sass will have to do instead. You know that great dinner I just told you about? Um, yeah, the tantrum experiment started as soon as she figured out we were leaving to go home. She was having such a great time with her newfound freedom that when she realized it was time to go, she wasn’t having it.

Instead of calmly walking to the car, holding my hand, she decided to start screaming, crying, and refusing to walk; which meant I had to try and carry her wriggling body to the parking lot. In moments like this, I feel nothing but an overwhelming stress to hurry up and make it through the situation. In America, the stress is heightened: I know how quickly people are to stare, judge, and then snap pictures for social media.

We got to the car and she forced herself off of me and sat down in front of the rear tire, still screaming her head off. I calmly turned around and handed the parking attendant his tip, loudly thanking him as if nothing adverse was happening. He didn’t even seem to notice she was crying, but that didn’t surprise me, no one really seems to notice events like that here. Allowing us to be in the moment of the tantrum was hard for me. When she starts throwing tantrums any other time, I usually rush to get us out of the situation as quickly as possible. I had to make a conscious decision to just let her sit there for a moment and do her thing. Eventually, I picked her up and put her in her car seat, which was a bit like giving a cat a bath, but I couldn’t just let her sit out there because there was traffic and we needed to leave.

Was I Ready For A New Take On Parenting?

This whole experiment wasn’t at all liked I’d imagined. The one thing I was worried about — the restaurant outing — wasn’t nearly as bad as I thought it’d be, and the one I underestimated — her tantrum — was the worst. I don’t think I’ll ever be the parent who just calmly lets their kid throw a tantrum in public and does nothing about it. I totally get that tantrums are normal, but I just don’t think the public has to suffer along with me.

I’ve definitely learned to identify with my neighbors a little more, even if I am technically still an American outsider, and I think because of this, I’ll judge them a little less and try to show more compassion. Before this experiment, I think I unfairly judged Italian mothers based off what I could hear coming through my walls, which is a lot of screaming. I’d ask myself over and over again why they just “let” it happen. But after letting my daughter play out a tantrum, I can imagine it’s just as hard for them as it was for me. I also only have one to worry about one, where they have four, and often times all the kids are screaming at once because they’re so close in age. I think my neighbor may even have it worse, as I recently learned that Italian families don’t normally have more than two children. These women don’t need me to judge them.

I do admire how kids here have a little more freedom, and how they’re protected — not just by their parents but by strangers too. Italians really believe in the thought of just letting kids be, well, kids. When I examine my own parenting beliefs, I realize they aren’t all that different, and I hope to remember that when raising my own daughter. First-time and veteran women are just doing what feels right, figuring out parenting as they go, and it's important we all give ourselves some credit.

Lastly, and maybe most importantly, just because I do things one way in my country doesn’t mean the way they do it here is wrong; it’s just different — and that’s totally OK with me.