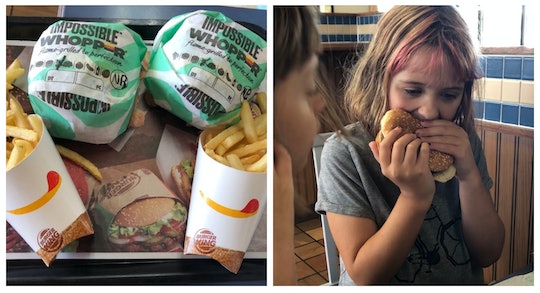 My Kids Tried The Impossible Whopper & Plants Are King

My husband and I are vegan, and we are raising our two daughters vegan as well, so we’ve seen more than our fair share of debate about Impossible burgers and other plant-based meat-replacement options in the news and on social media lately.

Burger King is currently offering the "Impossible Whopper" at all its stores. Dunkin’ is rolling out a Beyond sausage sandwich. Baskin-Robbins now offers non-dairy ice cream. Carl’s Jr., White Castle, and others have each had one of these plant-based options for some time now, and I just read today that KFC will soon offer plant-based Beyond chicken in some locations. Amazing!! Some vegans think no one should eat at these kinds of joints. Others think vegans should support the efforts of fast-food restaurants and other big corporations to embrace plant-based options. It’s pretty clear to me what the answer is. If you don’t want to eat an Impossible Whopper, then don’t eat one. But save the judgement. They’re a great option for many of us, and here’s why: plant-based choices are critical for the environment (with as much as a 90% reduction in greenhouse emissions over meat, and 93% less impact on land-use, per a University of Michigan study commissioned by Beyond Meat), they’re better for our health, and obviously they are good for the animals.

With all the latest news saying the way to stop the fires in the Amazon is by dramatically reducing our intake of beef, to me the next step was clear. I felt like we had to do our part. So my partner, my girls, and I tried the Impossible Whopper.

Truthfully, this was not a huge step. While we’d avoided the Impossible products previously found to contain dairy, we’ve been eating their burgers at Bareburger in New York City and at other restaurant chains for months now. We’ve been keeping a supply of Beyond burgers in our freezer for well over a year. Anytime we eat out anywhere that offers one, my husband orders it. Beyond BBQ. Beyond bacon cheeseburger. Beyond Mexicali. I like the patty on top of a Caesar salad or added to a vegetable entrée for some flavor and protein. We also serve them whenever we have family or friends over; they’re always a big hit for omnivores and most vegetarians and vegans. My 78-year-old meat-and-potatoes loving father eats them and loves them!

They are not fake, they are very, very real.

So there we were, on a road trip to a beachy summer destination, and we were hungry. I suddenly noticed the fast food advertisements for upcoming exits off the highway that I’d ignored for 20 years or more. Hey, we could go to Burger King, I suggested. We could get the Impossible Whopper; I bet they have them.

I tried calling the Burger King a few miles down the road and got an answering machine. I called the one 20 miles further out and got another answering machine. I mapped us to the one further away and sure enough, when we pulled into the parking lot in this middle-of-nowhere location off a two-lane highway, the windows of the entire restaurant were plastered with posters advertising that the Impossible Whopper was here! I hadn’t set foot in a Burger King in well over 20 years, but I strode in with confidence and went right up to the counter.

We ordered two Whopper meals with fries, more fries, and drinks and it cost me a fraction of what we spend elsewhere for fancy vegan burgers and fries. I felt fine about the BK fries because unlike McDonalds, which uses natural beef flavor in its fries, as detailed by ABC, they are vegan. I am not particularly worried about cross-contamination because I am vegan primarily for ethical reasons. Generally speaking, when we eat out, we eat at entirely vegan establishments so we don’t end up with stray bits of this or that in our food by accident, but on the rare occasions that we eat at omni restaurants, we know that a degree of cross-contamination in inevitable, so we accept it as long as we can’t taste it. We accept it because me eating a veggie burger grilled on the same grill as the beef burgers doesn’t contribute to the killing of animals the way me eating a beef burger would.

That said, the employee at Burger King was very concerned about cross-contamination on our behalf. I’d ordered our burgers without mayo or cheese, and that flagged for her that we were vegan. She asked me if I wanted it all completely vegan, and I said yes. First, she reassured me that the bun is vegan. Then she marked our order as vegan and called to the workers in the back that these patties had to be microwaved and not grilled.

If you’re a purist, this is how you will want your burger. But I have to say that I’ve tried these burgers grilled and now I’ve tried them microwaved, and microwaving is less than ideal. The texture changes a little, the outside of the burger gets tougher and even oddly crunchy. Grilling is better. But man. It’s still delicious either way.

Even my super picky 9-year-old ate most of one with extra pickles and ketchup. We joked that next time we’ll bring slices of nondairy cheddar cheese with us. Which means that maybe there will be a next time. We travel a lot, and we sometimes find ourselves in places where our options are not great so it’s possible that we will want the Impossible again.

I was thrilled that the staff at this off-the-beaten-path location had been clearly well trained to deal with vegan customers. As we ate, I asked another staff member if many people have been ordering the Impossible Whopper and she said, "Oh yes! They’re very popular, and not just with vegetarians!" Then I asked if she thought Burger King would keep them on the menu permanently. "No," she said, looking genuinely dejected. "I don’t think they will." Burger King did not respond to a request for information on how long we will get to enjoy the Impossible Whopper.

Which is a bummer. Because even though I don’t plan to eat at Burger King often, I want this option to be there for everyone who wants it. If we are going to be the change we wish to see in the world, it has to be a little easier and more readily available. Making changes to how we eat and how we live, especially if it means giving up something we love or that is easy and convenient, is difficult.

We joked that next time we’ll bring slices of nondairy cheddar cheese with us. Which means that maybe there will be a next time.

I know some folks who cringe about the taste of meat replacements. Some vegans want to know the same thing the meat eaters want to know: Do they taste like meat? Well, they’re supposed to! I’ve been vegetarian since I was 14, so I can’t say for sure if they taste the way I remember meat tasting, but either way, I think they are delicious. (If you are concerned about GMOs, you may want to opt for Beyond burgers, which, unlike Impossible, are GMO-free, according to Fueled By Science.) If you stopped eating meat because you just don’t like the taste, then these burgers may not be for you. If you’re a meat-eater who wants to make a change without giving up the taste you love, grab a tray.

Maybe you’re like my husband. He went vegan because I was not interested in dating, let alone marrying, a non-vegan, but he stayed vegan because he realized that it was a far better option for factory-farmed animals, for the climate, and for his own body. I’ve learned to make a variety of veganized versions of his favorite dishes. I make my own seitan and chimichurri sauce. I make an alfredo dish. I make pizzas with a variety of toppings. I make “chick’n” parmigiana heroes. I make vegan pesto and an assortment of my own cheeses out of almonds, cashews, and macadamia nuts. I make bacon from tempeh. But we also buy lots of alternative meats: vegan chicken nuggets, corn dogs, hot dogs, bacon, nondairy ice cream, and more. On Thanksgiving, we have a Tofurky surrounded by a dozen homemade dishes.

I would argue that we should no longer refer to these food items as “fake” chicken or “fake” cheese. They aren’t fake. They’re vegan. Or non-dairy. Or plant-based. But they are not fake, they are very, very real.

We all know that we can do better, but it’s not our fault entirely when we don’t. Big corporations need to help. They need to make it easier for us to make better choices. I gave up eating meat back when the choices were extremely limited and it was not easy. I’ve eaten my fair share of foods that tasted like twigs and bark and earth. I have had more “grilled veggie” wraps — better known as tasteless and greasy peppers and zucchini slapped into a tortilla — than anyone should ever have to eat. At my high school prom, I was served a plate of carrots and string beans. In 2019, we can all do better. We as a society have to make it easy for vegetarians and meat-eaters alike to make better choices.