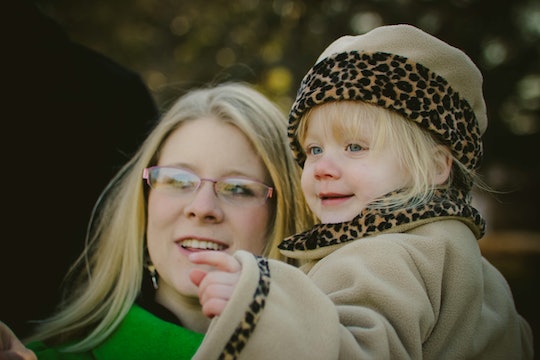 Trying To Be The Perfect Mom Meant My Kid Suffered

The kind of mother I thought I would be before I started growing a human and the mother I became in the first few sleepless weeks of motherhood are two totally different women. The transformation was hard, and I fought to hold on to the rules I’d made for myself in those know-it-all childfree days. But trying to be the "perfect" parent meant that my kid suffered greatly.

Just a few days after I gave birth, I remember my mother-in-law telling me I was the perfect mother. It was a great compliment coming from her, since she is the love child of June Cleaver and Mr. Clean, and since I felt like I had no idea what I was doing, I welcomed the praise for my perfection over and over — until it became an obsession of mine. I never cared before if anyone thought I was perfect, and I actually prided myself on being a hot mess. I’m way closer to an honorable mention than a trophy wife, and after being married to her son for a few years, my mother-in-law finally accepted my complete lack of housekeeping abilities. But, for whatever reason, she seemed to think I was a perfect mother, and I’ll admit I really liked hearing that. So I read all the parenting books and blogs trying to make sure I stayed up to date on what I should be doing, and I became an anxiety-ridden mess trying to maintain my perfect-mother status.

Being the only person in the world for someone is flattering, no doubt, and I did have this secret sense of pride that I was the one person on earth who knew my baby the best. But if she was sleepy or hungry or sad or scared, I was the only one she wanted.

My daughter was a high-maintenance baby to say the least, and only the perfect combination of babywearing, breastfeeding, and bed-sharing could soothe her. In my mind, a crying baby was a sure sign that I wasn’t a good mother, so I decided that attachment parenting was my safest path to perfection. But I let the pendulum swing too far, and in my efforts to be the perfect attachment parent, I cheated my firstborn.

My own insecurities about perfection led me to obsess over things like making my own baby food and exclusively breastfeeding. I never tried a bottle until she was 3 months old, and by that point she was addicted to milk straight from the tap. I was stuck as the sole provider of nourishment, and even after she started solid foods, I was still the sole source of comfort until she weaned at 2. Being the only person in the world for someone is flattering, no doubt, and I did have this secret sense of pride that I was the one person on earth who knew my baby the best. But if she was sleepy or hungry or sad or scared, I was the only one she wanted. I’d never been needed like that in my life. It’s not that my husband didn’t love me, but being married to him was like having a cat. He’s a great companion to hang out with, but he doesn’t actually need me for anything. This baby, however, was like a needy puppy.

As she grew, I was the default parent. I stayed home with her, so I knew what every single whimper meant. And since most of those whimpers meant she was hungry, I was on call day and night. Since my husband couldn’t feed her, he changed diapers and did baths, but he used too many wipes and I didn’t like the way he took her towel off to dress her. I tried to leave the house once to go to a Zumba class, but when I came home she was crying in her crib.

He said he’d put her down because she wouldn’t stop crying and he didn’t know what else to do. I was furious with him for not having any intuition, and I didn’t leave her with him again until she could talk. Looking back, I may have been a tad controlling. I knew everything there was to know about our child, and I didn’t have the time or patience to teach him. My husband didn’t really start to bond with our first child until she was almost 4 years old.

At 15 months old she could walk and talk, so I saw no reason why she couldn’t potty train. I spent that summer letting her run around without a diaper, and I smugly told everyone she was totally potty trained at 18 months old. Well, once I put panties on her she had non-stop accidents, and I'd get mad because I knew she was capable of sitting on the potty. In hindsight, my toddler knew more about child development than I did, and she’d just pee and look at me like, “Yeah well why do you keep putting these flimsy weird diapers on me? They don’t even absorb anything.”

I should've seen the blessing when she regressed and started peeing on my floor, but I just saw it as an affront to my perfection. I was too worried about that Mother-of-the-Year trophy and my kid was the one who suffered.

I got pregnant with her sister just after she turned 2, so the potty training really had to ramp up. They say you can’t have two in diapers because it’s way too hard — so we expedited the training. For what it's worth, I don’t know who “they” are, but they are dirty, filthy liars. I lost sleep and my place with Jesus trying to potty train that child, but we managed to do it just a few months before baby number two arrived. And yeah, sure, it was definitely easier to have a small child come dancing into the living room holding her butt telling me she has to go now, right as I got her little sister latched on. Trying to walk to the bathroom without breaking a latch and wipe a butt with one hand while holding a newborn with another was way easier than just letting the kid poop in a diaper.

I should've seen the blessing when she regressed and started peeing on my floor, but I just saw it as an affront to my perfection. I was too worried about that Mother-of-the-Year trophy and my kid was the one who suffered.

I lost my perfect mother card that day for sure. I was so worried about being a perfect parent that I wasn’t even a decent one.

The day she peed on my couch was my low point. I’d just sat down to feed the baby when my oldest started jumping around. I told her to go potty, but she said she wanted me to go with her. I told her I couldn’t because the baby needed to eat, but she insisted that she needed me. Her sister hadn’t slept all night, and my sleep deprivation did nothing to help with my patience. I growled at her to stop jumping on the couch and go potty. She looked me square in the eye and stopped jumping. Then she peed right on the couch.

What I did next was the lowest point in my entire parenting life. I flew to the couch and swatted those wet My Little Pony panties faster than I knew what was happening. She immediately burst into tears, and so did I. I’d never spanked my child before. She got timeouts, or we missed out on treats, but I was not a spanker. Even if I was a spanker, I believe it's a cardinal sin to spank a child for a potty accident. I lost my perfect mother card that day for sure.

I was so worried about being a perfect parent that I wasn’t even a decent one. I put the baby in her swing and I scooped up that little pee-soaked toddler. I held her and told her I was so sorry. Hitting was not OK, even when we are mad. She was fine, and we went back to diapers until it was her idea to try panties again.

I took a step back that day and reexamined myself as a mother. There’s no such thing as perfection, and I vowed to stop striving for it. I’ve still had to check my overachieving self a few times since then. Like when I started to fret that she couldn’t read when she was 4 years old. My mom told me I read when I was 3, and I internalized that to mean that I was failing. But I took a breath and remembered the My Little Pony panties. I decided that instead of fighting her to read before she was ready, I'd just read to her and hope she loved it so much she’d pick it up on her own. She’s now one of the best readers in second grade, and now I fight to hide the flashlights at night because she sneaks them under her covers to read Harry Potter until midnight.

I learned so much from the mistakes I made in her older sister’s toddler days that I no longer strive to follow the rules. I just enjoy the little moments and make my own rules. She potty trained herself around 3, and she still needs help going to the bathroom at night.

My second daughter is 4 years old now, and she’s the one who really has the perfect mother. I learned so much from the mistakes I made in her older sister’s toddler days that I no longer strive to follow the rules. I just enjoy the little moments and make my own rules. She potty trained herself around 3, and she still needs help going to the bathroom at night. But I never had one moment of stress over it — I would've been fine if she stayed in diapers throughout college.

My youngest already wants to learn to read, and she probably could. She figured out how to spell her name by watching me write it on birthday cards, but I'll never sit and drill letters with her. I just read stories with her so that she learns to love it more than she learns to do it. She’s the one who started bonding with her dad as a baby because I had no choice but to let him diaper and bathe and parent in his own way. Being perfect for two kids is way harder than being perfect for one. I had no damns left to give about any of it by the time my second turned 3 months old.

And I’ve stopped trying to impress my mother-in-law or parent my kids according to all those parenting books or mommy blogs. I just parent my own kids in my own way, and since I stopped striving for perfection, things have been pretty perfect all on their own.

More Like This
20 Stocking Stuffers For Kids Under $20
101 Advent Calendar Activities, From Books To Read To Cookies To Bake
Spread Some Christmas Cheer In Your Child’s Bedroom
13 Brilliant Gifts For Kids Obsessed With Music — Especially Singing Very Loudly