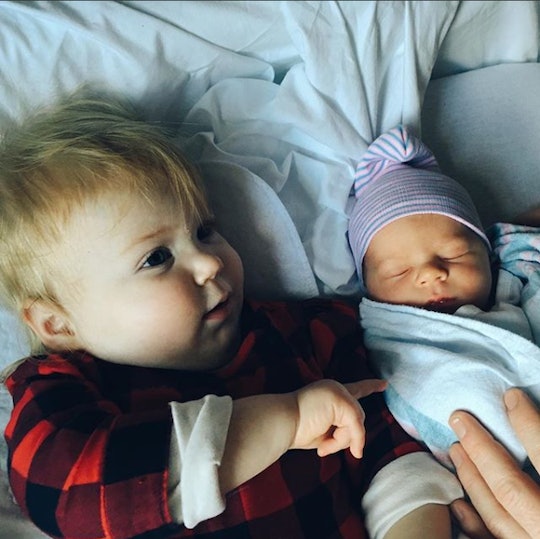 I Tried To Induce Labor With Castor Oil, & It Was Basically A Miracle

Most pregnant women feel pretty keen to go into labor by the time they reach "term," and this was even more true for my second pregnancy. Once you're up around the 39-week mark, your mindset changes quickly: you go from taking the utmost care (no unpasteurized cheese! No sushi! Only two kombuchas a day!) to dosing yourself with witchy tinctures, burning stubs of sage and, yes, even drinking castor oil to induce labor naturally — or try to, at least.

The effectiveness of natural methods for inducing labor is unproven, while medical inductions are effective for anywhere from 9.5 percent to 35 percent of pregnancies, according to the American Academy of Family Physicians. Having said that, non-pharmacological methods of ripening the cervix — think nipple stimulation, enemas, and sex — do help the odds that induction will work by improving the Bishop score (the pre-labor scoring system for your cervix). A randomized trial of 100 patients in New York by Cochrane Review in 2013 found that "58 percent of women who took castor oil began active labor within 24 hours compared to only 4% of those who did not receive any treatment." In other words, the evidence is somewhat thin on natural induction methods, but it's a gleaming golden hope when you are 40 weeks pregnant and want your baby now.

One day shy of my due date, I was having contractions, but only a passing vibe of surface tension that I didn't even notice unless I had my hands on my belly. Endless Braxton Hicks. "Could you please sweep my membranes?" I begged my OB at my visit.

"Already did," he replied. "You're pretty ready to have the baby, huh?"

He told me that, given I was 80 percent effaced, dilated to 3 centimeters and having small, intermittent contractions, I could try castor oil to induce the birth. To be clear, I wasn't in some birthing teepee talking to a shaman, I was in a Weill-Cornell-affiliated practice in the Financial District of Manhattan. It was full of white machinery and pale blue curtains that rang a metallic note when the nurse swept them closed to give you privacy. This practice had a plant wall, for crying out loud.

Get me that castor oil, you mad genius, I thought.

I stopped at a Duane Reed on the way home — that bastion of midwifery — and picked up a bottle of castor oil and a bunch of snacks. The doctor told me to take one dose (two tablespoons of castor oil), then wait 12 hours to take another. It was 7 o'clock at night; I did the math and took my first dose right there on the subway, chasing it with some terrible reconstituted orange juice (again: Duane Reed).

What can you expect if you opt for the Call the Midwife-era birth plan of castor oil? Several hours after gulping down the oil, which tastes like either whale blubber or melted Vaseline, I'm not sure, your body will work hard to expel it. Expect significant digestive cramps as it takes a broom to your intestines — it's these "contractions" of a sort that are supposed to jumpstart your uterus into a rhythm.

My insides gleamed like a crystal cave, but for the most part, I *thought* the experiment had failed.

This manifests as some enthusiastic pooping that peters off to a sort of sparsely attended ticker-tape parade when there is nothing left in your system. I drank and drank to keep myself hydrated, hoping for the telltale signs of true labor. That night, I dreamt of contractions and awoke still stuck in labor limbo. My insides gleamed like a crystal cave, but for the most part, I thought the experiment had failed. The doctor had suggested that it takes about 24 hours for the castor oil to "work," but recall I was 40 weeks pregnant and very, very impatient. Contractions continued through the day, and I passed the 24-hour mark whining about my terrible luck in between what I thought were inconsequential contractions. In the morning, sick of my complaining, my husband suggested we take a walk to get my mind off it. Well.

Have you ever been stopped in your tracks by a mega-contraction in the middle of a pedestrian crossing? Have you ever peed yourself in a busy intersection as dollar buses honk their way past? As I tried to shuffle home, being walloped by painful contractions every half block, my husband called the doctor's phone service. "Come in!" My OB-GYN replied to my husband's voicemail.

We got in an Uber and the baby was born 20 minutes after arriving at the emergency room. Ladies and gentlemen, I don't even think I had time to poop while delivering my son. By my calculation, I had him about 36 hours after the first dose of castor oil.

A welcome upside of the oil was that the dreaded post-birth bowel movement felt like a flowy interpretive dance. Waiting days to poop after my first child was an added layer of anxiety on top of the new-mom cake — it ruined my experience of the crispy, carby Shake Shack my sister-in-law brought to the hospital. I do not wish that kind of afterbirth on anyone.

And it's anecdotal, but boy, that second delivery was night and day from my first. One moment, I was suspended over the en suite toilet by a massive contraction with my pants halfway off, and the next I was giving it two pushes on a gurney and feeling my son shoot out like a t-shirt from a cannon.

Did the castor oil play a role in it? Probably not, according to the science on hand. Routine use of enemas during labor isn't advocated any longer in the U.S., though it does occur in Europe. But to me, the old wives' tales oddly make sense: by emptying out the digestive tract, you create room in the abdominal cavity and reduce the complications on the far side of birth, like, say, attempting to address constipation while healing from an episiotomy. Still, the medical establishment disagrees, and I don't know that I would have dared try it if not for the enthusiastic suggestion of my OB-GYN.