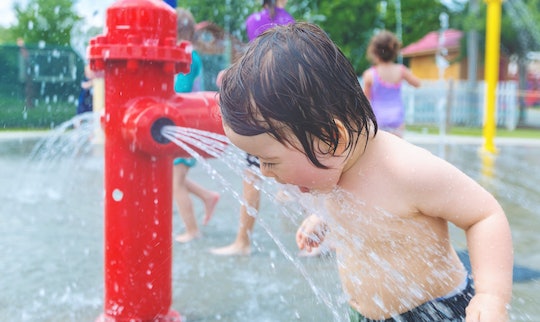 My Friend Posted What She Thought Was A Harmless Nude Pic Of Her Toddler, & I Unfollowed Her

Moms of Instagram fall into three categories. There’s the Friends Only This Account Is Private Mom, the Back of My Kid’s Head And Pseudonym Mom, and No Boundaries At All Mom. I am somewhere in the middle. My Instagram is public since I use it mainly for my business, but carefully scrubbed and censored when it comes to my kids. My Insta feed is a predictable scroll of yoga pants, motivational quotes, messy-bun selfies, juice-drinking selfies, and lot and lots of babies, bumps, and toddlers. But last month, one picture made me audibly gasp and unfollow my friend. She has been going too far for my taste for years. But when she posted a nude picture of her child, who was nearly 3 years old, that was it.

There was never a time this gal showed any social media restraint regarding her child. She posted a pic of baby’s arrival on Instagram immediately after delivery. There are literally thousands of pictures of her kid online on her totally public accounts. She’s not alone. Lots of moms love to share every moment and milestone, celebrating their little one’s achievements. And typically, that’s fine.

But I draw the line at full-frontal nudity. Cute babies are amazing. Adorable toddlers make my day. Naked toddlers pooping in your kitchen are weird. Bath time maybe doesn’t need to be shared with strangers. Sure, I’m not a stranger. But what about the 2,000+ people that are also following this account?

For months, I just thought my friend’s behavior was a little too much.

I take my privacy seriously online. I’m easily embarrassed myself and hate when people post pictures of me without my OK. Why would I do that to my kid? It’s not that I don’t have thousands of photos of them. I do. But they stay with me. I even have strict no-sharing-outside-the-family policy agreed upon by all the grandparents.

For months, I just thought my friend’s behavior was a little too much. Just a toe over the line. After all, her kid was only a year old, then 18 months old, then turning 2. One night my husband, scrolling through his phone next to me, made a disgusted sound. “I don’t need to see that.”

He also followed the family on Instagram and had unexpectedly come across their naked kid sitting on the toilet. Nothing like a potty-training update with images. He unfollowed them.

I made it through the potty-training months by quickly scrolling past the many (many) bare-ass pictures and by chalking it up to a mom who just wants to celebrate her kid. Even I had posted a picture of my baby’s face when she hit 6 months old (sans name or exact birthdate).

Suddenly it was not a little goofy or quirky. I unfollowed her. I don’t need Instagram to keep me updated. I still have her on Facebook (where nudity is not tolerated and immediately removed). We text and even though I’m a total hermit, I even see her occasionally. But I was too uncomfortable to keep her on Instagram. She doesn’t know. If we were best friends, if we were family, maybe I would say something. Instead, I choose to quietly unfollow and just not be a part of it.

I can’t imagine middle school, had people been able to find pics of me at 3-years-old pooping in the living room.

Yes, the kid is still really a baby at just 2-and-a-half. But my oldest daughter is just a few months older than that and I would never allow someone to hand out pictures of her naked. Which is exactly what a public Instagram does.

My babies have no say what I post about them on the internet. I can’t imagine middle school, had people been able to find pics of me at 3-years-old pooping in the living room. Whether we want to believe it or not, nothing ever really gets deleted from the internet. Programs like The Wayback Machine archive webpages every day so users can recall any site on any day of its history and find what it looked like.

In France, this could have legal consequences. They have the strictest privacy laws in the world, especially for children. No person or media outlet can post photos of a minor without parental permission and their law makes it possible for children to sue their parents later in life if they were put in danger or humiliated.

In the end, it isn’t my choice what kinds of things my friends chose to post about themselves or their kids. But I wonder who they are really posting for. Because it isn’t me.