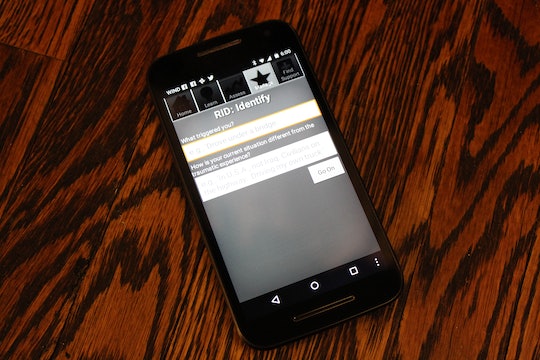 I Used A PTSD App For A Week, & This Is What I Learned

Over the past five years, I’ve learned a lot about mental health. Mostly because that’s when I finally realized what a huge issue it was in my life. I’d struggled with depression for years without even knowing it, and then after I finally figured it out, it took a few more years — plus a breakdown and a subsequent hospitalization — to actually get it under control. Since then I’ve also been diagnosed with PMDD (a form of severe PMS that is seriously emotionally debilitating), anxiety, and, most recently, PTSD, following my children’s traumatic birth and four-month-long NICU stay. These diagnoses have been important for me, because they’ve allowed me to start getting some meaningful help, backed by a group of doctors who totally take what I’m going through seriously. But knowing a lot doesn’t necessarily mean anything when you’re in the midst of struggling. And I could really use a little help when I’m struggling.

Recently, a counselor I’d begun seeing had mentioned that there are actually apps out there that can help with anxiety and PTSD symptoms. I had honestly never even considered that such a thing would exist, but hey, if it could help me through some of the crippling flashbacks and panic attacks, then I’m totally down to give them a try (like most people suffering from chronic mental illness, I’m basically down for trying anything that could help me feel better). The app she recommended, PTSD Coach, was developed by the U.S. Department of Veterans Affairs for military service members dealing with a range of PTSD symptoms including flashbacks, nightmares, anxiety, avoidance, and hyper-vigilance.

Now, I definitely wasn’t experiencing the kind of severe PTSD that a war veteran might develop — I still struggle with feeling like my extremely premature birth wasn’t “bad enough” to warrant being so traumatized — but my counselor assured me that a lot of the coping skills are helpful in all kinds of situations. And since my symptoms were definitely getting worse over time, not better, I figured I could probably use all the help I could get.

The PTSD Coach app is supposed to complement a professional treatment plan for PTSD, which, right now, I don’t actually have. I’m kind of just flying by the seat of my pants, hoping I don’t get triggered, which admittedly isn’t the best solution, but I was hopeful that maybe I could learn a thing or two from the app that could at least help me in the meantime.

I decided to use the app for a week and see if it made a difference, because if it helped me, maybe it could help other people, too.