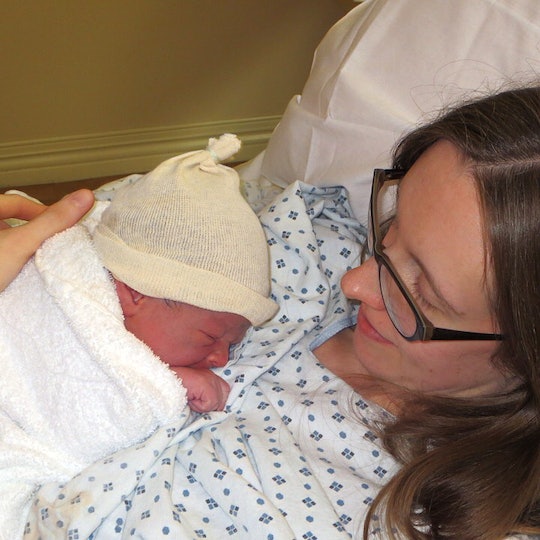 I Used Nitrous During Labor, & It Was Totally Worth The Trip

In the span of five years, I gave birth to three 8-and-a-half pound baby boys. You could say I’m well-versed in the three stages of labor (early, active, and transition, otherwise known as “pain,” “more pain,” and “holy crap, I’m gonna die”). This is the story of how I discovered a magical remedy for that pain: nitrous oxide.

Labor with my first son was slow and steady, taking one whole evening and part of the next morning. But labor with my second was fast and furious — I almost didn’t make it to the hospital on time, arriving more than eight centimeters dilated and barely able to climb up onto the delivery table.

Because those experiences were so different, I had no idea what to expect when I went into labor with my third son. Slow and steady, or fast and furious?

Long story short, that labor ended up being a little of both. It started out comfortably slow but skyrocketed into this-baby-is-coming-right-now territory somewhere in the middle of active labor. I went from 6 centimeters to 10 centimeters dilated in under one hour. The sudden change was intense, frightening, and — of course — excruciating.

It had never been part of my birth plan with any of my kids to get an epidural, and despite my alarming discomfort, I still didn’t want one. But I needed help managing the pain, stat.

That’s when my midwife reminded me that nitrous oxide was an option.

I felt heady and weightless, like I was floating — a balloon bobbing around on a string.

The hospital where I was delivering had recently adopted the use of nitrous as an option for pain management during labor. The midwives at my practice had educated me on it during my prenatal appointments, though I assumed I wouldn’t need it. I survived two previous labors on sheer stubbornness and grit alone! Surely I would be fine without the nitrous.

But at 8 centimeters dilated and counting, I jumped on the chance. I knew from my prenatal counseling that it was not only a safe option, but one that’s totally temporary.

“What is best about [nitrous] is that it’s short acting and [patients] don't have to commit to it long term,” says Erin Morelli, certified nurse-midwife at Yale New Haven Hospital’s Center for Women’s Health and Midwifery. “A patient can try it, it's in their system in under a minute and if they don't find it helpful, it's out of their system in three to five minutes.”

A nurse wheeled in the nitrous machine and gave me a quick tutorial: hold the mask up to my face and breathe normally. If I felt lightheaded, numb, dizzy or nauseous, I should lower the mask and wait for the feeling to subside before trying again.

I pressed the mask over my nose and mouth and inhaled. Moments later, I had the sensation of being several degrees removed from the pain of intense contractions. I felt heady and weightless, like I was floating — a balloon bobbing around on a string. Pain that had only moments before felt insurmountable now felt manageable.

Let me be clear: I still felt the pain. The nitrous didn’t make that sensation disappear. But it did numb me to its intensity, clouding my awareness (I later described this phenomenon to my husband as “still knowing that everything hurt, but not caring about it as much”).

In the middle of a labor that blindsided me with its swift progression, the nitrous allowed me to catch my breath. It gave me enough relief to center myself, refocus on my breathing, and prepare myself for the final leg of labor — pushing.

It turns out that using nitrous in this situation is quite common, along with its use in any number of other birthing scenarios.

“Some [patients] use it for early labor until they can get an epidural. Some use it to calm them during epidural placement. Others use it to get them through transition until it's time to push, and others use it with an epidural in place if they are having a window or area that the epidural isn't reaching,” says Morelli. “There are many different types of patients who are ideal for nitrous, and that is the beauty of it.”

After 10 or 15 minutes, I discarded the mask; at that point I was ready to start pushing, and it just felt like a hindrance.

The nitrous was exactly what I needed in that moment — though I will be totally transparent in saying that it wasn’t without its downsides. There was a definite learning curve to using it effectively. Continuously removing and replacing the mask meant that the effects of the nitrous were interrupted (that is, my awareness of the pain returned quickly and in full force). But when I tried to leave the mask on during contractions, my accelerated breathing meant I took in a lot of nitrous — enough to feel dizzy and numb in my extremities.

I didn’t have a lot of patience for these side effects when the lower half of my body was wracked with pain. After 10 or 15 minutes, I discarded the mask; at that point I was ready to start pushing, and it just felt like a hindrance. Soon after, my son was born, and any memory of pain began fading away.

Since then, I’ve been open with expectant mothers about my experience using nitrous, because it’s the kind of thing that’s hard to explain with facts and statistics alone. I always use one word to describe how it made me feel: weird.

That’s not necessarily a bad thing. But would I use nitrous again, should I find myself delivering a fourth baby sometime in the future? I honestly don’t know. I think the nitrous helped me power through a particularly rough patch of labor. It allowed me to stick with my plan to have a natural delivery and avoid an epidural. In that way, the nitrous was a valuable option, and I’m glad I had it.

If it does work, you’ll be golden — riding high on a cloud of blissful indifference, wondering why you didn’t ask for it sooner.

On the other hand, I still felt the pain of transitional labor — there was no covering that up. I didn’t love the side effects. It was also, at times, cumbersome and distracting to keep holding the mask up to my face. I was relieved when the need for nitrous had passed, and I could go back to feeling like my normal self (or at least as normal as anyone can feel when they’re about to expel a human being from their nether regions).

What it all boils down to, really, is that labor sucks. And whether you use nitrous, narcotics, an epidural, or some other obscure birthing technique designed to help you manage the pain, the only real way out is through, as the saying goes.

So as you’re going through it, you might as well give nitrous a shot. It’s a rare no-strings-attached way to survive the worst parts of labor. If it doesn’t work for you, toss the mask and move on to another option. But if it does work, you’ll be golden — riding high on a cloud of blissful indifference, wondering why you didn’t ask for it sooner.

Now, if someone could only invent a way for new mothers to be blissfully indifferent during that first postpartum bowel movement…

More Like This
Turns Out, You Can Dilate Pretty Far Before You Actually Go Into Labor
I Found Gender Euphoria In My Second Pregnancy
Pitocin Induction: What It Is & The Play-By-Play
This Is How Your Water Breaks During A C-Section