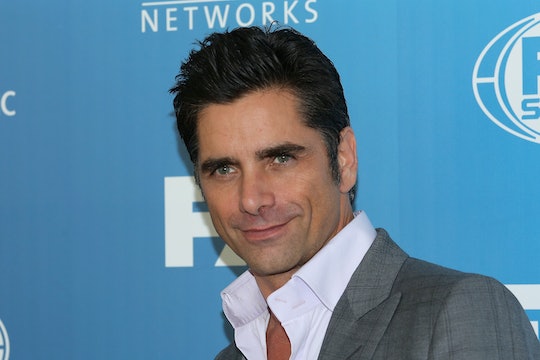 There’s an easy way to know if someone has ever watched Full House, and it includes asking just one question: "Did you grow up in the 90s?" If yes, then they watched Full House. If no, then IDK what to tell you. Sorry. I still remember how pumped I used to get when I’d hear that theme song blare from the TV, beckoning my siblings and me from our homework stations to the family room while my mom made dinner and watched from the kitchen behind us. I can still hear that raspy 90s Kenny Loggins-ish voice crooning, “Everywhere you look, everywhere you go…” and smell my mom’s cooking and every time I do, I feel all those warm, cozy feelings thinking about the adorable Tanner Family. Man, I loved them. But my favorite of all of them, by far, was the hunky, lovable, totally adorbable Uncle Jesse. He wasn't the the girls paternal father, but he was played just as important a role in their lives, and I'm not alone in saying that Uncle Jesse's most memorable quotes have stayed with me — even all these years later.

He had those dashing Greek features, was so adorable with Michelle, was so into Becky, rode a motorcycle, rocked his ass off with The Rippers, and that hair! And who could forget those famous Uncle Jesse-isms? He had some of the best catchphrases in sitcom history. As I was feeling nostalgic and on some weird Uncle Jesse kick, I thought I’d use some of his best lines on my kids to pay homage to one of my favorite shows and get psyched for the new upcoming Full House comeback, Fuller House.

In an effort to imbue our household with the spirit of Uncle Jesse (and mostly to humor my 90s self), I parented my two kids using Uncle Jesse-isms as frequently as possible for a week. I incorporated Jesse Speak into conversations I had with both my 13 year old and my 3 year old to see just how much they could take, and perhaps how much they would embrace it.

Usually said with his eyes closed and a furrowed brow, and usually in reaction to a fine lady love and later on, to his wife Becky, “Have mercy!” was Uncle Jesse’s most famous, signature line. And this was, by far, my most favorite phrase to use on my kids. I could use it anytime and all the time. There was always a sweet opportunity for me to bust out that phrase with the accompanying Elvis-y delivery.

Though I didn't love all the times Jesse uses the phrase around women, I did love the feeling it evoked. When Stella, my 3 year old, wouldn’t eat her lunch? Have mercy! Upon seeing the Vegas-style buffet she set up with her plastic food in our front room? Have mercy! When my 13-year old Evan threw his rugby ball in the house and knocked over a line of picture frames? Have mercy! Whenever I could, I used the phrase. And every time I used it, Stella would stop and look at me, half-amused, half-annoyed and say, “Why are you saying that?” or “What does ‘have mercy!’ mean?” Evan thought it was funny … the first three dozen times I used it. He even joined in and used it back at me.

Uncle Jesse loved his hair. It was actually so big and full and early 90s that it was almost offensive. Especially when it was a true, healthy mullet. But he primped and producted, cared for and protected the hell out of that mullet. Hence, “Watch the hair!” became a well-known Uncle Jesse phrase. As my hair is currently in that weird grow out phase that comes after going super short on a whim, it was hard for me to be very convincing about being super protective of and in love with my hair.

But, nonetheless, I channeled Jesse and proceeded to freak out anytime my kids accidentally touched or even got near to my hair, which, with a toddler, is every other second. The phrase itself is silly, but saying this with such frequency just made it so ridiculous that both my kids would crack up and intentionally muss up my hair, and then a crazy-hair mussing/noogie-giving party would ensue.

It got to the point that using this phrase was a signal to get immediately rowdy and get your hair effed up. After day two, I was careful to only use this phrase at night when I had no plans to go out into public.

It's Safe To Say Some Things Only Worked For Uncle Jesse

Though a warm-hearted family man at heart, Uncle Jesse was a rebel, and had to do some things differently to hold up his bad boy, rock ‘n’ roll image. Like answering the phone with an abrupt, “talk to me” rather than “hello.” This Uncle Jesse move is the one that my kids embraced the least. Mostly due to the fact that it's such a 90s characterization of a “bad boy” or even sorta cool thing to say or do, and also because according to Evan, who put it in more appropriate terms, is just sounds "old" and well, un-cool, when used now.

Evan sprung back in “Ewww!” the first time I answered his phone call this way. And every time after, he’d give me at least five seconds of silence on the other end followed by a, “Mom, that's not OK.” When Stella would overhear my Uncle Jesse greeting, she’d just look confused and appalled. She would alternate saying, “Why don’t you say ‘hello,’ Mom?” and “That’s not very nice.” And I would just say, “Uncle Jesse was a rebel!” and find amusement in not offering any further explanation.

My Daughter Was Over It

Uncle Jesse loved to add a “per se” to his words especially when skirting around a predicament. And do you remember how it became a thing back in the day to tag “per se” onto your own sentences, Uncle Jesse style? Well, I do. And I had a heyday using this one all over again with my kids, much like all the others. I used it both correctly and incorrectly, arbitrarily adding it to phrases like “No we’re not eating at McDonalds, per se” and “Ask Daddy to wipe your butt, per se.”

Stella, who's 3, kept thinking I was addressing her as “Persay”, and would get all Sassy McFrassy back at me with an, “I’m Stella!” And Evan sort of just ignored it.

We Were Like Our Own Michelle And Uncle Jesse

One of the best things about Uncle Jesse was how cute he was with Michelle. Seeing him interact with and play with her made me so excited to have kids and to share that connection with someone. I loved how important he was in their lives, and I love how much his love meant to the girls and Danny and Joey (and vice versa).

One of the most memorable things from the show that I'll never forget is how sweet Jesse was on Michelle. They had this adorable bond, and it's one I think of even when someone mentions the show. (And it's going to be really hard to watch Fuller House without Michelle Tanner.) Jesse constantly said a lot of adorable things to Michelle and he often punctuated something he said to her with “capisce?” which is Italian for, “you understand?”

After about the fifth or sixth time saying this to my daughter, she started saying it back to me enthusiastically to confirm that yes, she understood. She loved this one. At one point, I swear we were only communicating with “Capisce?” said back and forth in varying inflections and tones. I loved how silly it made us both, even though my daughter totally didn't get why I was doing it or even that it was a huge line from Full House.

"Forever" Doesn't Really Have The Same Meaning To Kids

When Becky and Uncle Jesse got married, Uncle Jesse sang a Beach Boys’ song, “Forever,” which he covered with his band The Rippers. The lyrics start out with, “If every word I said could make you laugh, I’d talk forever.” The delivery and feeling behind these words was very sweet, even if the lyrics weren't the best. Of course, when he sang this at his wedding to his new bride, it had a much different impact than when I spontaneously bounded into Evan’s room and popped off this line of the song, out of the blue.

Evan cracked up at the randomness of it all and gave me a big, confused “What the heck?”

Did Uncle Jesse's Best Lines Work On My Kids?

Ultimately, all of Uncle Jesse’s catchphrases were probably not any more obnoxious than some of my own sayings that I torture my kids with on a regular basis. My kids are used to quirky projects and are always happy to contribute. They more or less welcomed my new Uncle Jesse persona even though they weren't totally sure who he was, or why I was doing it. But thanks to Nick At Night reruns, my son had an idea who he was, but hadn't watched Full House enough to be familiar with those phrases that we, 90s peeps, know and love.

That said, even without having watched the show, Uncle Jesse's lovable, youthful nature came through in those short, playful, and borderline cringeworthy phrases. And my kids picked up on that. They loved embracing the silly things I was saying and ding and we all ended up having a good time together. And let's face it, using Uncle Jesse's 90s Full House quotes on them was definitely silly. It made us all laugh, and made me appreciate and miss Uncle Jesse Katsopolis' fun-loving nature and his big, shiny mullet hair. And it also set off a major Full House marathon in our house. So yes, Uncle Jesse-isms may linger around here for a little while, and trust me when I tell you that have mercy! is alive and well in our home.