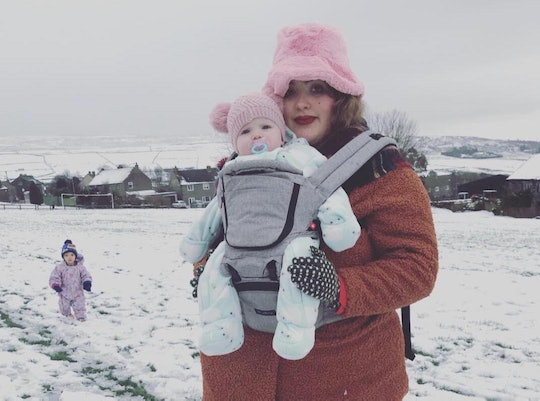 The Problem With Telling All Moms To Baby-Wear

Before I even had my first daughter, I felt completely funneled toward baby-wearing. My midwives recommended it as a way to "drop the pregnancy weight fast." Similarly, some of the fellow moms in my circles spoke endlessly about how carrying helped "keep them fit." Baby-wearing was framed not only as a "healthy" mode of transporting one's child, but as an immensely trendy and cool option at that.

Everyone from Beyoncé to the Kardashians to Orlando Bloom has been seen doing it, after all, so it follows that regular, everyday people should follow suit. As a plus-size mom, however, I would soon find that — despite how fervently we are pushed towards carrying — baby-wearing isn't always a size-inclusive practice.

I was gifted an initial carrier in the third trimester of my first pregnancy. It was a BabyBjörn, selected by my mom after a lady in a store told her this product was "all the rage" amongst millennials. As soon as I unwrapped it, I knew we had a problem. I immediately extended its shoulder, back, and waist straps to the loosest settings, but when we tried getting the contraption on my body, none of the buckles would actually buckle.

I had decided that baby-wearing was, in fact, something I wanted to do. My family lives in a rural area of England where there are a lot of cobbled and unpaved roads, moorland, and muddy fields. It's a beautiful place, but not always a stroller-friendly one. So I kept trying to find a carrier. For months, I bought (and inevitably returned) dozens of the ones available at the baby and toddler shops near me. Nothing fit.

I typically wear a size U.S. 20 or 22, and am what's considered a "mid-fat" within some of my body-positive and fat-positive communities. This basically means that, even though I am visibly fat and self-identify as such, there are plenty of plus-size people who are both smaller and bigger than me.

Just like all humans, parents exist in all sizes. My experiences in trying to find a well-fitting carrier, however, quickly proved that there must be a lot of fat moms out there being excluded from participating. This shouldn't have been surprising, per se. Baby carriers are something worn on the body, and as with all clothing and accessories, plus-size women are routinely left out.

All around me were voices encouraging baby-wearing — proclaiming it as a means of keeping physically active, or bonding with my baby, or even looking chic.

I was used to not being able to shop at most brick and mortar stores. I was used to being sized-out of companies declaring themselves "size-inclusive." I was even used to being ignored by the maternity and nursing spheres of the industry. If you've ever tried finding a nursing bra in a size 46C or higher, you know the pure hell that it is.

What was particularly troublesome about the lack of carriers was simple, though. I felt like I just couldn't win. All around me were voices encouraging baby-wearing — proclaiming it as a means of keeping physically active, or bonding with my baby, or even looking chic. These were voices that seemed to follow all the first-time mothers I knew, as if we aren't already bombarded by pressure and expectations at all corners.

All around me, as a fat mom, were also voices demanding I baby-wear. So many people expect plus-size individuals to work out and do all that they can to keep "in shape," whatever the heck that means. Unfortunately, those who actually want to participate in physical activity are very rarely allowed to do so easily. The lack of practical options (in this case, carriers that fit my large body) is astounding.

So here I was, actually wanting to baby-wear. Not because of some misguided notion that I "should lose the baby weight" ASAP, and certainly not to prove to anyone that I was doing my "good fatty" duty by being active. I wanted to wear my child on my body purely because I live in the country. Sure, I liked the idea of having an extra reason to snuggle up to my kid. Mostly, though, I just liked the idea of not getting a stroller stuck in a pile of horse poo.

I have since learned that the Moby is among the preferred carriers out there for plus-size mamas.

Unfortunately, all the manufacturers of baby carriers I was trying definitely didn't seem to like the idea of a fat mom using their products in return. At least, that's how I felt as a result of the sheer lack of choices for a body like mine.

As has so often been the way in my life, it was the plus-size resources of the internet (and specifically, the fellow plus-size angels within them) that ended up saving me. The Plus Size Baby Wearing page on Instagram is full of stories from actual plus-size moms who've successfully found carriers. There are plenty of tried and true recommendations to be found on it, and folks are usually willing to chat openly if you have any questions. Plus Size Birth, an incredible resource for plus-size mothers navigating pregnancy, labor, and the postpartum period alike, was immensely helpful as well. Through its list of carriers and wraps that fit fat bodies, I found the Moby Wrap — the first carrier I tried that easily went around my whole big bod.

Although I have since learned that the Moby is among the preferred carriers out there for plus-size mamas, I eventually discovered the Miamily Hipster Plus, a buckle-based carrier that fits folks with waists up to 51 inches or so. This carrier has suited my children and I best, purely because it feels easier to get on and off than a wrap-like product. It's also highly versatile, allowing you to wear your kid on your front or back, and lasting until they are approximately 4 years old.

To any plus-size parent considering baby-wearing, my advice would be simple. The idea of shopping in IRL stores might be tempting and romantic, but it's not worth the hassle. It's not worth the bitterness that comes with feeling actively excluded yet again. Instead, consider using the plus-size parenting resources that exist online to find carriers that fit your needs and your body. Talk to other plus-size people. Always check the measurements of carriers within their descriptions. Trust that the online community of size acceptance proponents will have your back.

To any parent, of any size, considering baby-wearing, however (and especially to moms), I'd only say this. Don't let anyone funnel you towards practices you aren't interested in. Some people like baby-wearing. Some people prefer strollers. Either option is acceptable. And either option is "cool," so long as it's the one that genuinely works for you.

More Like This
7 Baby Name Generators To Try
We Have To Talk About This Fish That Will Pat Your Baby's Butt Until They Fall Asleep
Can You Give A Sleeping Baby A Breathing Treatment? Experts Explain
Celebrate Baby's First Christmas With These 40 Instagram Captions