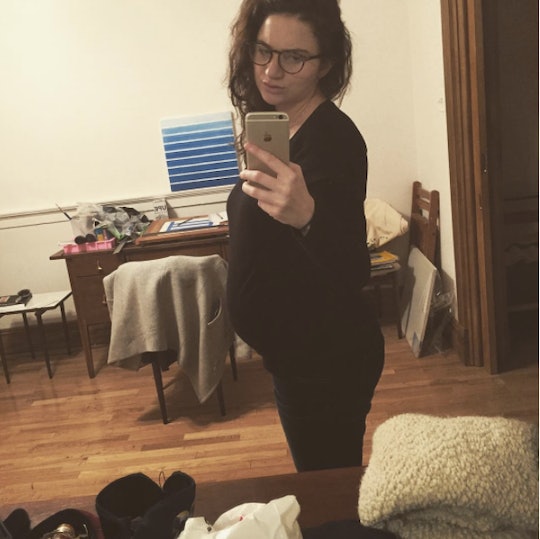 I Was Fat-Shamed During My Pregnancy

I have always been a small person, in both the literal and more colloquial senses of the word. For 27 years, I haven't had to eat well to maintain a consistently low weight, nor did I have to exercise. And even though I probably wouldn't have admitted it to anyone else, I took enormous pride in both of those things. (Hence, why I am "small" in the colloquial sense as well.)

So imagine my surprise when I got pregnant 8 and a half months ago and almost immediately saw myself balloon to Eddie-Murphy-dressed-in-problematic-drag status. It wasn't just my stomach, either. My boobs went up three cup sizes. My thighs started rubbing together, producing diamond-shaped welts whenever I had walked more than a block in anything flimsier than a Hazmat suit. And my ass got wider, to the point that I could no longer navigate tight corners at restaurants without the other patrons glaring at me. It felt like there was a giant shaved taxidermied animal strapped to my back following me around, that could've inspired a whimsical Roald Dahl children's book, EJ and the Rapidly Expanding Gluteus.

All told, I've probably gained about 45 pounds throughout my pregnancy, which is, as my OB-GYN delicately put it, "on the high side of normal." I knew that my weight gain was not a medical concern and my pregnancy was not at risk, because my gyno had said so and I'd passed my gestational diabetes test with flying colors, and my friends and immediate family members kept assuring me I looked healthy and great, but I felt pretty goddamn self-conscious about itnonetheless.

I don't quite know how I packed on the pounds so quickly (although if I had to guess, I'd say "a combination of insatiable cravings for grilled cheese sandwiches and total physical inactivity" played a role.) So imagine how it felt when the men in my life felt the need to comment on it, frequently and with great aplomb. I was fat-shamed during my pregnancy, and it pissed me. The. F*ck. Off.

"I thought you were just some random fat woman."

It all started at the beginning of my third trimester, when my weight gain started to gravitate from my gargantuan ass more toward the front, where a baby bump started to slowly emerge. At first, I was pleased about this. I figured people would see I was visibly pregnant and either start to give up their seats on the subway to me, or worship me as a resplendent fecund fertility Earth Mother goddess. But once I realized that seated passengers' eyes would quickly dart away from my belly during my commute and that no one was going to start a pagan religion in my name, I started to get a lot less excited about my baby bump.

My father-in-law, however, was excited about it, although that excitement manifested itself in an interesting way. "You're starting to really fill out, Plumpy," he told me when we met my in-laws for dinner. About a week later, when we met up to see Allied at the movies, he took his schtick one further.

"I barely recognized you as you were walking toward me," he said as I strutted (OK, lumbered) from the bathroom to meet them after the movie. "I thought you were just some random fat woman."

I know my father-in-law, and I know he would never say anything intentionally hurtful to me. Clearly, his remarks were intended in jest, and he said them with a smile on his face. (It's also worth noting that he was born and raised in Italy, the land of Berlusconi and unapologetic street fat-shaming, so they have a different bar for what constitutes respectful commentary on a woman's looks than they do here.) But it did hurt. It hurt a f*ckton. Because even though I knew I was pregnant, and therefore had a "justifiable" reason for packing on weight, I also knew that I officially no longer looked like EJ, the preternaturally slim woman I'd been my whole life. I looked like some anonymous lady waddling across a Loews Cineplex.

By the time Christmas rolled around, my weight gain had slowed down to what my OB called a "consistent" pace, but I was still incredibly self-conscious about it. I obsessively talked about my weight gain and my postpartum diet plans, which ranged from everything to getting Weight Watchers meals delivered to my door to nothing short of self-imposed starvation. ("It's called the Ice and Popcorn Diet. You just spend all day sucking on ice chips and eating Orville Redenbacher's. It's fabulous. I hear Blake Lively did it.")

"Hello, Fatty," he said before gesturing to my stomach and directly addressing my fetus. "'You're eating too much. Don't you know that? You need to stop eating. You're making your mom fat.'"

During Christmas dinner with my in-laws, that self-consciousness reached its apex when we had dinner at my in-laws. One of their longtime friends, who had been at our wedding a few months before, seemed flabbergasted by my appearance. "Well, you've gained a considerable amount of weight since last I saw you," he told me.

After dinner, as we were lounging around on the couch in tryptophan-induced comas, he sauntered over to me. "Hello, Fatty," he said before gesturing to my stomach and directly addressing my fetus. "'You're eating too much. Don't you know that? You need to stop eating. You're making your mom fat.'" He chortled at his own attempts at razor-sharp wit, revealing scads of brown teeth.

At this point, I was so angry that I didn't really know what to say. I could've gone with a simple "Go f*ck yourself," but decorum and the fact that he was one of my in-laws' friends prevented me from doing so. Or alternatively, I could've opted for a Churchill-esque, "I might be fat, but I'll only be fat for a few more months, while you, sir, will be ugly forever." But honestly, I was too flustered and too tired of feeling like I had to defend myself and my body to muster up anything but a weak, "Yes, once again, you are correct. I am 8 months pregnant."

Being pregnant causes a lot of physical and emotional changes that are well-documented, but to be honest you can't really foresee how they'll affect you until they actually happen. Weight gain is one of them. A loss of a sense of self is another.

I'd never thought of myself as the type of person who'd be wounded by another person's thoughtless comments on my appearance, nor did I ever think I'd be sent into an emotional tailspin over something as natural and expected as a pregnancy weight gain. But it took gaining 45 pounds during my pregnancy (and subsequently being shamed for it) for me to realize just how much my identity had been tied up in my thinness pre-partum, and how much easier it had been for me to navigate the world that way.

I stopped going out and seeing my friends as much. I felt like my husband did not find me sexually attractive, so I stopped having sex with him. Worst of all, I felt like my decision to have this baby had trapped me in a body I did not recognize or understand, and would possibly be stuck in for months after I gave birth. So I stopped being as excited for the baby.

It also made me confront my history of disordered eating, in a very real and immediate way. During high school, I'd consistently weighed around 95 pounds as a result of a diet of Luna bars and diet Pepsi. I was ridiculously unhealthy at the time, and people would regularly stop me in the halls to ask if I was OK, but I'd be lying if I said I wasn't a little resentful toward the little turd growing inside me, otherwise I could simply resort back to those methods. It scared the crap out of me that I was thinking that way.

After hearing my father-in-law and his friend make those comments, it was hard for me to walk around feeling like I came off to other people the way I actually was: an excited, very visibly knocked-up mom-to-be. And to be perfectly honest, it affected my behavior, in ways that I am somewhat ashamed of.

I felt like other people looked at me and saw a gluttonous Mrs. Pac-Man who couldn't control her impulses, so I stopped going out and seeing my friends as much. I felt like my husband did not find me sexually attractive, so I stopped having sex with him. Worst of all, I felt like my decision to have this baby had trapped me in a body I did not recognize or understand, and would possibly be stuck in for months after I gave birth. So I stopped being as excited for the baby.

But frankly, I am not that type of person. I am too small, in the colloquial sense of the word, for that; I am too sick, as the result of a culture obsessed with thinness and my own history of disordered eating, for that.

I am now approximately three weeks from my due date. I don't know if I'll get over my self-consciousness about my pregnant body before then, nor do I think I'll get over it right after my baby is born, either. (Though I imagine I'll be too stressed out to care as much.) I do know this, though: the next time someone addresses me as "Fatty," I will deliver a swift kick to their testicles. Because I might not think I'm beautiful right now, but I do know that I'm a life-giving Earth Mother Goddess, and you don't talk to an Earth Mother Goddess that way.