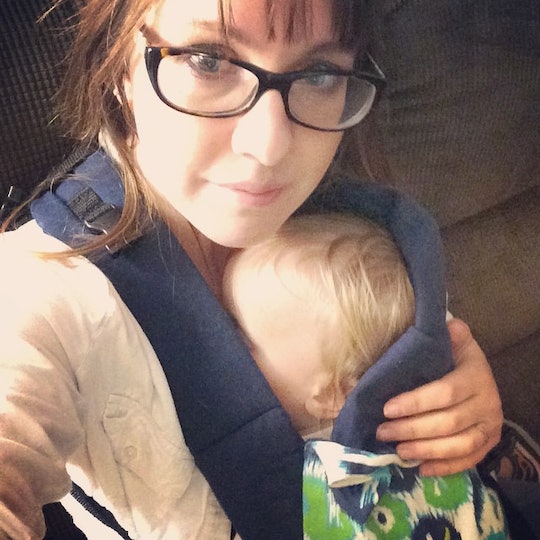 I Was Fat-Shamed For My Postpartum Weight By A Stranger

I used to be what my mother called a "skinny minnie." In college, I weighed 110 pounds soaking wet. When I got pregnant with my first son, I weighed around 130 pounds. But I gained weight really easy during my pregnancy and "popped" out my belly really early. The same happened with my subsequent two pregnancies. I gained 40 pounds with my first son, 70 pounds with my second, and a whopping 100 with my third baby. I lost most of it. But pregnancy had done things to my body, had changed it. My belly would never be teenage-dream flat again. And I know I won't see 110 pounds again in this lifetime. Because I spent so long identified as the "skinny girl," I was mortified when a man mistook me for pregnant. I was wearing a new dress, one with a pleat in the front, and I was fat-shamed for my postpartum weight by a total and complete stranger. It took everything I had not to cry on the spot.

In hindsight, I know I should've cut my losses, decked his ass, and hustled my kids out of there after he mistook me for being pregnant because of the way my body looks. But we were standing at the back of a Catholic Church on a Wednesday afternoon. My three sons were running around, climbing on the swing, inspecting the fire pit. I managed a “No, I’m not pregnant,” because that’s what women do when someone does something utterly unacceptable; we're conditioned to try to make it OK. But I was appalled. He felt he had the right to scrutinize my body. As if that wasn't already awful enough, he then felt he had the right to comment on it.

“I gained a lot of weight when I was pregnant with my last,” I said. “Like 100 pounds.” I didn’t know why the hell I was still talking to him. I didn’t know what I was saying. I just wanted to make this all go away. “I lost all but 10 pounds.”

“Yeah, and then I took Prozac, and it made me gain a ton of weight.” I still didn’t know why I kept talking. I knew even as I said it that this was none of his business. But he waxed on about how fat he got on steroids for a while, then smiled at me. “Don’t worry,” he said. “You’ll lose the weight.”

Instead of saying what I wanted to (which was: Oh no, assh*le. Your job is to tell me I look beautiful, not insinuate I need to lose weight. Not OK. Not in a million years.), I nodded, smiled, and was finally saved by the priest’s arrival. I drove the kids home and, at a stoplight, texted my husband. “I got mistaken for pregnant. And then he told me I was fat.” He didn’t answer. I walked in my front door, turned on Octonauts for the boys, ran into the back bedroom, and cried and cried and cried.

The dress I was wearing on the day he confused me for pregnant was a new dress, one I’d gotten from a store I routinely shop at on discount, one I really loved: a white A-line dress with blue stripes. I will never wear it again now, because the whole time I'm in it I’ll be wondering if I look fat.

People have since told me that the man who insulted my postpartum body and weight is a grade-A assh*le, and I shouldn’t listen to a word he says. But knowing that he's a jerk and that I shouldn't take his words to hard didn’t help me that day. I'm insecure about my postpartum body, and I wear dresses all the time in part to feel attractive. The dress I was wearing on the day he confused me for pregnant was a new dress, one I’d gotten from a store I routinely shop at on discount, one I really loved: a white A-line dress with blue stripes. I will never wear it again now, because the whole time I'm in it I’ll be wondering if I look fat.

It’s bad enough to be mistaken for pregnant. That tells you that you have enough jiggle in your middle to make someone think you could be carrying a baby in there. Which is depressing, because it’s likely you already know that jiggle is there to begin with and maybe you hate it. (In my case, I did.) It’s also a gross bodily invasion to have someone make a comment like that; you know they’re eyeing you up and making judgments about the way you look. And that’s never OK.

I spend hours of psychic energy trying to convince myself that I’m attractive. I don’t need to be Beyoncé, but I need to feel good in my own skin. Strangers telling me I need to lose weight sort of destroys that.

But to have him follow up with, “Don’t worry, you’ll lose the weight," well, that was gutting, no pun intended. With these words, he basically confirmed my worst fears: I am fat. And the way he said it, I knew exactly what it meant. When he told me I would "lose the weight," he was basically telling me that I am fat in the way that our society stereotypically sees and treats people whose bodies fall beyond the norm: because I am fat, my body is not OK, and because my body is fat and not OK, that is something I should work on. In one sweeping blow, he made me feel unattractive and reminded me that I never will be, at least, not until I “lose the weight.” Personally, I'm not OK with being labeled as fat. I don't identify as a fat person, and I have too many relatives who spent too many years dieting to shake the childhood associations that fat equals laziness, lack of willpower, and sadness. I'd never shame a person's body for looking different than mine. I spend hours of psychic energy trying to convince myself that I’m attractive. I don’t need to be Beyoncé, but I need to feel good in my own skin. Strangers telling me I need to lose weight sort of destroys that.

It’s been about a month now since that happened. I’m still not happy with my body. But it helps to know that people think this guy is an a-hole who speaks out of turn. I’ve decided I don’t want to cede my personal aesthetic to him. I’ve also lost about 10 pounds since then, all in my belly, which helps me feel better about myself. It shouldn’t; I know I should accept my body and love my body exactly the way it is. Doing so is a struggle. But I’m trying. And getting fat-shamed doesn’t help.