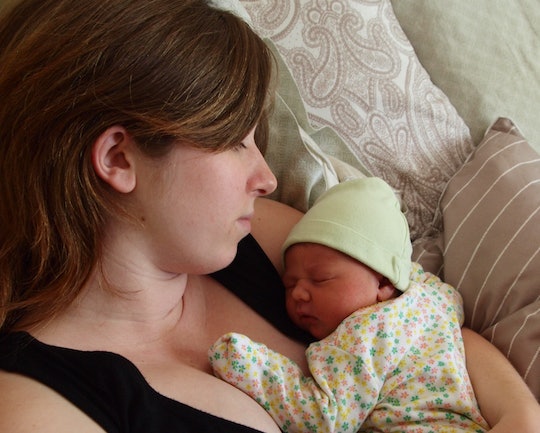 Within the hour after my son’s traumatic birth, he was already breastfeeding. A nurse came in and saw him latch, and though I felt unsure that everything was good and right, she nudged me on the shoulder and told me most first-time moms don’t have it so easy. I wanted to breastfeed exclusively, and had no plans of bottle feeding my infant, and I felt confident after her comment that everything was going according to plan. I never imagined a few days later that I'd be forced to bottle feed my newborn son.

Once I was wheeled away to a recovery room, things started to fall apart. I couldn’t tell if the latch was right, or if he was getting any milk. He wouldn’t stay at the breast for long, and I had a gut feeling that something wasn’t quite right. Yet another nurse came in and watched him latch and proclaimed him an early pro. They told me I didn’t need to see a lactation consultant. My milk simply hadn’t come in yet, but it would soon, they assured me. Perhaps my new-mom jitters were simply getting the best of me. We were sent home with our tiny baby a mere day after he was born, even though I wanted to shout at the hospital staff: "Let me stay! Help me! I have no idea what I’m doing!"

Because in the haze of new motherhood, I had so many questions.

When we got home, only one uncertain day passed before I was on the phone with a nurse airing my concerns. My son wasn’t nursing as well as I thought he should. Is he cluster feeding? they asked. “I don’t know. He’s sleeping so much and he doesn’t seem interested in breastfeeding.” Babies sleep a lot, is he lethargic? they asked. “I don’t know. I don’t know what is normal.” I didn’t know anything. Is he wetting enough diapers? “He isn’t going very much, but I don’t really know.”

She told me I was putting my baby in danger from dehydration. In fact, I'd done it already; that's was why he was here. He needed to eat, and for all she could tell, I wasn’t feeding him.

They chalked it up to new-mom phobia, and I sat wringing my hands until his three-day old appointment. When we arrived, I didn’t have time to tell them all my fears. They took one look at him and started running tests and called the hospital. He was severely jaundiced and dehydrated. I sat in a room holding his tiny hand while they tried to put an IV into his tiny, dried up veins for an hour. They put him under bilirubin lamps in a little plexiglass box and told me to take him out to feed him every couple of hours.

I was a wreck. Adjusting to being a new mom was hard enough without having my newborn out of my arms for most of the day. My milk still hadn’t come in, and I didn’t know what to do other than continue to try breastfeeding as often as they told me to. I felt like I was doing OK, but then a new nurse came in to check on us. She immediately started asking me about his feeding habits. I was exhausted and needed her to repeat some of her questions. I wasn’t sure exactly how much breast milk he was getting, or if he was getting any milk at all. I told her about how often and how long he was feeding but she was not impressed. "You need to feed him a bottle so I can see how much he’s eating," she said.

I felt really uncomfortable with the fact that she jumped immediately to bottle feeding. I was worried about nipple confusion and about the ease with which he may take to a bottle. I asked if there was some other way to tell how much milk he was getting. If there was any other way than the bottle, I'd take it. Then she threw out the ultimate trump card: she told me I was putting my baby in danger from dehydration. In fact, I'd done it already; that's was why he was here. He needed to eat, and for all she could tell, I wasn’t feeding him.

I felt like I couldn’t trust my body to provide for my baby. It took me nearly six months to feel like we really fell into a breastfeeding groove, and there were many, many moments I wanted to quit.

I tearfully sent my husband out to get a breast pump and bottles from Target. It wasn’t a part of my plan, but my plans were obviously wrong. By the time my husband got back, my milk had come in and my breasts were engorged and aching. I sadly pumped instead of breastfeeding my baby, and the nurse came in again, instructing me to use the bottle so we could accurately measure his milk intake.

What I needed more than anything was somebody who stood in my corner and reminded me that my body could do this. What I got instead made me question my own confidence.

We were in the same hospital building where I gave birth. Just a floor or two away were plenty of lactation consultants (who I didn’t know I could request), ready to help me through our breastfeeding struggles. Instead I was forced to bottle-feed my newborn, putting our breastfeeding journey on an even rockier path than we'd been on. He still didn’t eat much, and for all I knew, he might have been getting the same amount — or more — from breastfeeding. He left the hospital a few days later, healthy, and ready to be home, but once again, I didn’t feel ready as a mother.

Though my son wasn’t completely turned off from breastfeeding once he used the bottle, my confidence was shaken from the experience. I felt like I couldn’t trust my body to provide for my baby. It took me nearly six months to feel like we really fell into a breastfeeding groove, and there were many, many moments I wanted to quit. I know that the lack of support I received in those early days was directly related to the feelings of inadequacy I felt as I waded uncertainly into motherhood. What I needed more than anything was somebody who stood in my corner and reminded me that my body could do this. What I got instead made me question my own confidence.

I wish I had someone who could have advocated for me in those early days when I needed breastfeeding support so badly. I wish they would have given me the lactation consultant I wanted in recovery, because even though everything “looked” good, I needed more than a quick pat on the back to feel confident enough to stand up for myself when someone told me I wasn’t enough for my baby. I needed to know my choice as a mother was valuable and respected. I needed to know that breastfeeding would be hard, but oh, so worth it.

Our story turned out fine. I breastfed for 15 months and loved it eventually. But our path didn’t need to be so hard. A little postpartum care instead of judgment would have gone a long way. I needed more, so much more, than the care I received as a new mother. No one should ever have made me feel like I was making the wrong choice by wanting to exclusively breastfeed, and if I could do it all over again, I would have stood my ground. I would have said no to that pushy nurse. I would have done what was right for my son and my family and, most importantly, me.