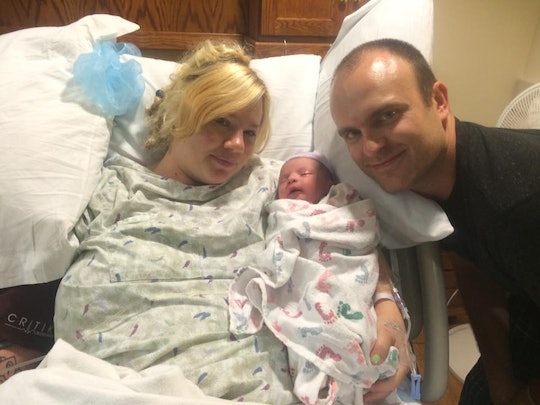 I Was Induced & I'm Bitter About It

It still amazes me how unpredictable pregnancy can be. I would've never guessed, come time to deliver my first child, that I might experience an induction because of low amniotic fluid. It doesn’t seem to be a rare occurrence or anything. In fact, it’s standard practice in the U.S. to induce women with isolated oligohydramnios, the condition of low amniotic fluid in an otherwise healthy pregnancy, at 40 weeks. It’s a fairly normal thing to do, apparently, but because my pregnancy was so healthy all the way through, it definitely took me by surprise when at 40 weeks and four days pregnant, my doctor suggested that we head to the hospital to induce during my otherwise normal weekly checkup.

In my head, I'd envisioned the onset of my labor naturally taking place — perhaps I’d go to bathroom to pee at night and my water would suddenly break and we'd head to the hospital from there. But in my case, there wasn’t much fluid in my uterus anymore to be broken, so things just weren't going to happen the way I'd initially imagined. When my doctor noticed I had an AFI (amniotic fluid index) of less than 2 cm (an AFI of 5 cm or less is required to define isolated oligohydramnios, according to a report in The Journal of Family Practice) during the ultrasound at my checkup, he didn’t suggest anything that would've made me feel like it was something I could've prevented, which is where my mind immediately went to. Instead, he simply told me that a low AFI can easily happen when a baby is taking up all the space in your uterus, that there were many factors that could've contributed to it, and that it was a sign we needed to go ahead and get her out of there. I trusted my doctor deciding to go ahead with the induction. But before I left the room, I had a good cry about the fact that things were out of my control.

I'd hoped my body would eventually start labor on its own — even though my due date had come and gone — and felt let down that I wasn't going to have the "natural" birth I'd envisioned all along. Yes, I was thrilled to be finally meeting my baby, but I never went into it thinking I wanted to be induced. But when my partner and I drove home to get my journal — literally the only thing that wasn’t already packed in the car in my hospital bag — it gave me time to process what was about to happen. Even though I wanted the stereotypical OMG, I'm suddenly in labor! experience, because it seemed like an adventure and honestly a little fun (adrenaline junkie speaking here), I’m grateful I had the chance to pause and prepare myself before my labor truly started.

If there wasn't any stone-cold evidence that I or my baby were in danger had we continued waiting for labor to start on its own, then I question why my doctor suggested induction in the first place.

Going home for a bit, telling my parents, then heading to the hospital as my partner and I made a video about it in the car are now all a part of my first birth story, and I’ve chosen to embrace it.

But looking back, especially after reading articles suggesting isolated oligohydramnios isn’t associated with poor maternal and fetal outcomes and that being induced because of it increases the rate of having a c-section (which happened to me and was something I ideally didn't want to happen) does honestly make me a little annoyed. If there wasn't any stone-cold evidence that I or my baby were in danger had we continued waiting for labor to start on its own, then I question why my doctor suggested induction in the first place. But more than that, I question why I then agreed to it. Not being induced might not have changed a single thing — there’s no way anyone can tell — but it makes me crazy to reimagine the scenario, especially if I think this were different or if that weren’t the same over and over again. So I’ve had to let it go.

If I had known then what I know now, I wouldn’t have agreed to the induction that day. Instead, I would've asked if I could drink lots more water and have my AFI checked in a few more days.

If I do think too long on it, the main reason why I sort of despair over being induced is that I agreed to the induction out of a medical concern, but apparently, according the articles I've read like this one from Best Ever Baby, it's not necessarily something to worry too much about. If I had known then what I know now, I wouldn’t have agreed to the induction that day. Instead, I would've asked if I could drink lots more water and have my AFI checked in a few more days to see if I would've gone into labor spontaneously, which has been known to happen to women within three days with this condition, according to Medscape. I might not have been as disappointed in an induction at that point had I been given the perfectly medically viable option of drinking water and waiting first.

I can’t go back and change my decision, but I refuse to beat myself up for it either, because it doesn’t make sense to put myself down. I had a baby, and I’m proud of myself. Besides, almost a year later, the decision on whether or not to induce is vastly insignificant compared to the experience of having my daughter in my life and parenting her now. Of course it matters to me how I make decisions, and realizing after the fact that a decision I thought I didn't have any control over was actually something I could've said no to has been incredibly difficult for me. But it matters more to me to be able to let go of my disappointment and focus on what I have in front of me: my beautiful, healthy baby girl.