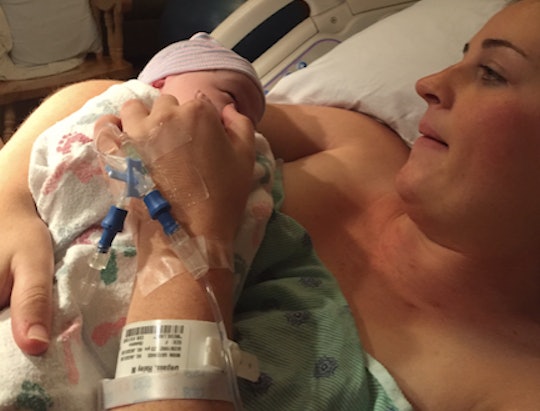 Actually, I'm Glad I Was Induced

I look back at my pregnancy, and I don’t look back at it fondly. I was not a Kourtney Kardashian, pulling my babies out and into this world without the help of an induction to go into labor. But I was a Kim through and through. I was sick the entire time, but thankfully never diagnosed with hyperemesis gravidarum. I got absolutely no maternity photos done and instead I would jokingly post pictures of breaching humpback whales as my maternity pictures on my Instagram. I think I only took mirror selfies so I could gawk at my ever-expanding stomach. I could clearly see and feel how large my baby boy was in my stomach, the space in my body was quickly being maxed out, but I didn't feel magical or sexy at all.

I was also under extreme stress, had just been dumped by my partner of two-and-half years, and had moved back in with my parents late in my third trimester. To say I couldn’t wait to give birth was an understatement. Of course ideally I would have loved to have gone into labor "naturally," but when my due date came and passed and my OB-GYN opted to induce me only three days past my due date (instead of waiting a week, which is what she typically did for her patients), I was all in. And looking back, I'm still so glad she did that.

I typically enjoy being in control in most situations, especially when it involves anything medical. And being induced was about as close as I could get to being in control of my son’s birth: The procedure had been scheduled, had a set time, a date, and instructions. On November 8, I checked in to the hospital at 8 a.m. and my doctor started the Pitocin an hour later. I clearly remember breathing through three hours of contractions, which was arguably the most intense pain I'd ever felt in my life, a pain which ironically enough I cannot remember now. Throughout my pregnancy I'd been on the fence about getting an epidural — that was, until I got to the point where I couldn’t even breathe through my contractions any longer and was essentially a large ball of sweat.

The drugs were working, and I got a little remote that would release more epidural medication each time I needed it. I lovingly referred to it as the “fun button."

I gave my nurse big baby deer eyes and she called in the anesthesiologist. My mom made note of just how lucky I was that the anesthesiologist had come in not even five minutes later to administer the epidural. She said usually, you had to wait about a half hour to an hour for the doctor to come in, but I got lucky. The idea of that made me shudder — oh, wait, that was just my body convulsing in yet another contraction.

Upon injection, the anesthesiologist hit a nerve in my lower back. My right leg flew out to the side and everyone in the room kind of froze. From behind me he asked, “Can you wiggle your toes?” I could, and I did. The drugs were working, and I got a little remote that would release more epidural medication each time I needed it. I lovingly referred to it as the “fun button."

Despite the act that my life was out of control at the time, it was important to me to feel like I had a handle on what was going on during my delivery.

My OB came in that afternoon and broke my water, and I was able to rest, finally. Being in a controlled environment, being at ease, and knowing what was going to happen to the best of my ability was extremely important to me because I was awaiting the arrival of my ex. I'd bought his plane ticket to fly from Southern to Northern California so he could be at his son’s birth. I wanted him there because I was also trying to show him I was worthy of him taking me back; I also wanted him to see that him having a relationship with his son was my priority. Looking back, this now seems so crazy to me, especially because I wish he wasn’t involved at all.

Being induced and having the epidural allowed me to operate under the illusion that I was somewhat in control of what was happening. It allowed me to focus on the process of giving birth to my son, and despite the act that my life was out of control at the time, it was important to me to feel like I had a handle on what was going on during my delivery. Even beyond, being induced and having some control over my delivery helped me feel empowered for what was to come. After I gave brith, I would be a single mom. My ex and I weren't together and I felt like an induction would help me get ahead of the situation, in a way. If I could handle giving birth, then surely I could be a mom. Now of course I know this was some kind of pipe dream, because if I've learned anything about motherhood, it's that once you think you've got things figured out, they change. You're often at the mercy of your child's development.

I wouldn’t change my birthing experience for the world, because ultimately it gave me my little boy. After being induced and having an epidural, I don't think I could've gone any other way. To me, it was still the most "natural" birth in the world.