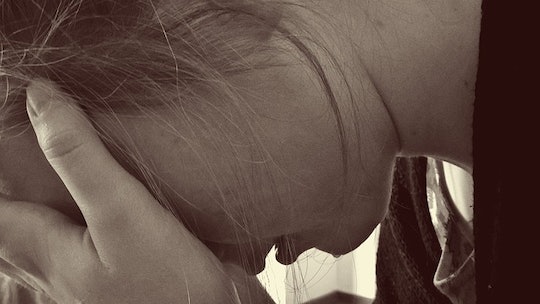 No, You Can't "Just Leave" An Emotionally Abusive Relationship

If I thought long enough about all of the moments in my relationship when I knew I should have left, I'd drive myself wild. I consistently reprimand my own naivety and feel stupid for being "blinded by love." My own self-criticism of my two-and-half-year long relationship is often amplified when friends, family, and sometimes even strangers ask me, “Why didn’t you leave sooner?” more than I care to hear. Partners leave one another all of the time for being treated poorly, so why couldn’t I? This, I believe, is the one thing most people don’t understand about being in an emotionally abusive relationship. You're not simply "blinded by love," and no, you can't "just leave" an emotionally abusive relationship, because you're often stripped of your mental and emotional stability to the point where you can't make the practical decision to leave the relationship.

Emotional abuse is typically all about control and isolation. HealthyPlace.com defines emotional abuse as "any act including confinement, isolation, verbal assault, humiliation, intimidation, infantilization, or any other treatment which may diminish the sense of identity, dignity, and self-worth." At first, it started small in my relationship. I distinctly remember my ex telling me how much he disliked some of my closest friends. He'd tell me they had "untrustworthy qualities" or didn’t seem like a “real friend." In my mind at the time I thought, here is the person I love telling me the people I love aren’t good friends, and he's telling me this because he has nothing but my best interests in mind, right? Even when I ignored his thoughts about my girlfriends and mentioned that I was going to spend time with them anyway, he'd usually say something like, “I don’t like you hanging out with her, she’s trouble." But I just made a habit of ignoring him.

When I didn't do what my ex wanted, he'd stonewall me and withhold all verbal communication. So to save us from yet another fight, I stopped going out with my girlfriends, and eventually just stopped hanging out with them altogether. When it came to my family, he'd always say that my mom and brothers didn’t like him. I couldn’t even fathom this, but the discomfort he claimed to have kept me from visiting them more often.

His need for control slowly took over my life, but at the time, I didn't realize what was happening.

Over time, I stopped leaving the house without his permission. School and work were just about the only places I could go without causing tidal waves in our relationship, and even then I had anxiety the whole time I was gone. If I came home later than expected from work, I wouldn’t hear the end of it. He'd accuse me of staying and drinking or of hanging out with male coworkers. The accusations came so often that I had horrific anxiety trying to finish up my shift as a bartender at a reasonable time so I wouldn’t get “in trouble” with my partner. I felt like I was back in high school with a curfew. My ex even tried to gain control of my finances. We actually combined our money a lot more than I felt comfortable with, but thankfully I did always have control of my own money.

It felt like it was us against the world, and if I was against him, well, it was just me on my own, and I didn’t want that now, did I? Even when I found inappropriate text messages he'd sent and received from other women, I didn't leave. He'd leave me alone for hours at a time, lying to me about the relationships he had with women who were calling and texting him. I'd confront him about his unfaithfulness constantly, but he'd just tell me I was "crazy." All of a sudden, I was the jealous one. Even though he would bombard me with accusations of just looking at other men, now I was the one with the severe jealousy problem. I'd catch him lying about the most ridiculous things. He'd lie to me about hanging out with his brother, something I could have cared less about. He'd usually tell me he was alone, so when I found out later he wasn't, I was so confused as to why he needed to lie. I expressed to him over and over that his lying wasn’t helping my own trust issues. He'd apologize, promise to never lie again, and overcompensate with extravagant gifts. But the lying continued.

I always protected him and was dishonest with others and myself because I didn't want to believe the fact that I'd fallen deeply in love with a person who treated me so poorly.

When you’re an emotional abuser, you hold the power when you’re lying to someone, and wield even more power when you’re getting away with it. My ex exerted that kind of control over me, and I felt like I actually was crazy, because when you hear something like that as often as I did, you start to believe it. I believed the things he said about my friends and the things he'd said about my mom and my brothers. And my ex was often able to control me by using the fact that I'd suffered from clinical depression against me. On the worst days, he'd tell me I "needed more therapy." What he didn't know was that I was already lying to my therapist about the horrible points our relationship had reached. I always protected him and was dishonest with others and myself because I didn't want to believe the fact that I'd fallen deeply in love with a person who treated me so poorly.

I wanted so badly to make things work, and mistook so much of his bad behavior as displays of love and affection. He was my first love, I remember telling myself that maybe this was normal.

I'd lost all ability to think clearly and even to think for myself. I wasn’t a person I knew or even recognized anymore.

I couldn't even begin to describe all of the times I apologized for things I didn't do in my relationship. I was the criminal no matter what happened, and how dare I accuse him of something I was certain sure he was doing. He manipulated my feelings for him and threatened to end our relationship instead of working through the issues we so frequently faced. He'd tell me that I'd never find anyone who cared for me as much as he did, and I believed him. There were ultimatums all of the time: accept that I was paranoid, jealous, and overly emotional, or he'd leave me; stop hanging out with my friends, or get the cold shoulder; quit spending time with my family, or else he'd ignore me. Our relationship was a constant cycle of control.

So when people ask me why I didn’t leave sooner or after he said this or did that, it's because I honestly felt like, at that time, whatever problems existed in our relationship were all my fault. I'd lost all ability to think clearly and even to think for myself. I wasn’t a person I knew or even recognized anymore. The scary part, however, is acknowledging the fact that I could’ve stayed in our unhealthy relationship longer had he not left me when I was eight months pregnant with our baby. But, he did, and I am so grateful for that. It helped show me that being a mother was what I was meant for — being with him was not.

More Like This
Why Your Vagina May Be Itchy After Sex & What To Do About It
Fun, Sexy Maternity Lingerie, For When The Mood Strikes
140 Quotes About Love To Make You Swoon
71 Instagram Captions About Love, Because It's All You Need
What Parents Are Talking About — Delivered Straight To Your Inbox