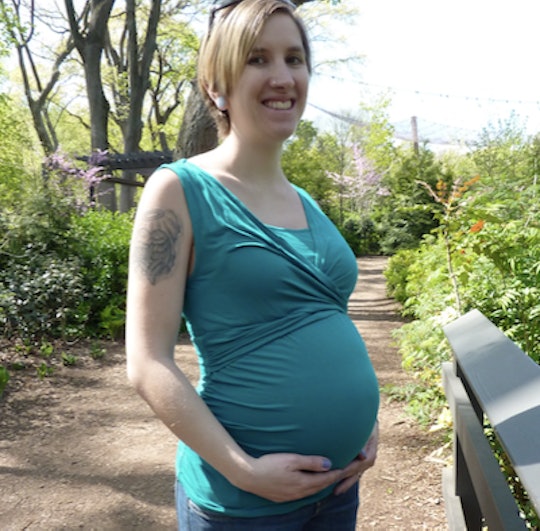 When I conceived my daughter in the fall of 2012, I weighed just 110 pounds. When I gave birth the following summer I weighed 130, which meant I'd gained roughly 20 pounds over the course of my pregnancy — which, according to WebMD and many doctors is 5-8 pounds less than I should have. I was a thin pregnant woman, and everyone — strangers, friends, coworkers — had something to say about it. I didn’t start showing until I was 18 weeks; before then, I looked like a “a skinny girl with a little gut,” or so I was told. I worked a full-time job. I ate a well-balanced diet. I ran until I was 38 weeks (with my doctor’s approval). But because I was thin, everyone assumed there was a problem. I wasn’t big enough. I wasn’t eating enough. Maybe I was “mommyrexic” or struggling with “pregorexia.” I mean, why else was I so small? Was I going to the doctor, they asked? And if I was, well, what did my doctor think? (I was, and my doctor thought I was fine. In fact, he thought I was better than fine. He thought I was doing great.)

Regardless of what my medical professional told me, the comments hurt. I became self-conscious and I worried that everyone around me somehow knew better than my doctor. I worried I was hurting my daughter. (I mean, they had given birth and I hadn't: What if I wasn't doing enough? Eating enough? What if my doctor was wrong?) But I wasn't wrong; they were. Because while being thin and pregnant can be a cause for concern, it wasn't wrong for me.

I was healthy and on track. I was doing exactly what the doctor ordered. Yet at every turn, I was thin-shamed for my pregnancy weight gain, and the comments cut me to the core.

Before I got pregnant, I was overwhelmingly body conscious. I was weight- and calorie-obsessed, and the very idea of gaining weight, coupled with my body dysmorphia, kept me from conceiving for many years. Because I was afraid of gaining weight. I was afraid, if I did, I would never be able to get my "body back."

But once I got pregnant, something shifted. I let go of all my fears and insecurities and focused on the baby growing in my belly. I ate “right,” (lots of fruits and vegetables, chicken, and whole grains). I did whatever the doctor advised. I did whatever I could to keep us both healthy and safe. And I felt good. I looked good, and I was happy. Like, truly, genuinely happy. But not everyone agreed. Some thought I was "too small." I was "too thin." I "wasn’t eating enough," and these comments hurt. These comments made me feel judged. These comments implied I was doing something wrong and intentionally putting my child in harms way. These comments made me more aware of my body than I would have been otherwise.

My value as a mother was never up to the determination of the size of my stomach, the width of my arms, or the thickness of my ankles. My health was not up to the consideration of some abstract number on a scale that said nothing about how I felt.

According to the U.S. Department of Health and Human Services National Institutes of Health, to stay healthy and safe, pregnant women only need to eat 300 extra calories a day. So just because I was pregnant and “eating for two” didn’t mean I needed to eat twice as much food. I didn’t need have an appetizer, entree, and dessert. I didn’t need to shovel something in my face every two hours, and I didn’t force myself to eat anything that my body didn't need or want. I simply ate when I was hungry and stopped when I was full, and I listened to my body.

I Was "Working Out Too Much"

I was very active before I became pregnant. I did yoga and I ran as often as I could. I did boot camp-style workouts and spinning classes and I was a distance runner. I loved the way working out made my body feel and beyond that, I loved how it helped me cope with my depression. And even though I wasn’t running 10 and 12 miles a day with a baby in my stomach, I did run two to three miles every other day until I was 38 weeks.

I enjoyed working out, but it never was a prerequisite to conceiving. I might've been a pregnant woman exercising, but it didn't mean that I was overdoing it or doing things something I shouldn't. In fact, light to moderate exercise is a good thing. As Dr. Sheeva Talebian explained in an interview with Women’s Running, "Running is safe anytime during pregnancy — during the [fi]rst, second and third trimester if you are having an uncomplicated pregnancy."

The same goes true for most workout regimens. While Talebian did note that women should not run if they're dealing with pregnancy “complications like elevated blood pressure or, in some cases, multiple gestation,” Talebian added that “women who exercise while pregnant have lower rates of [gestational] diabetes and preeclampsia.”

How much weight a woman gains (or doesn’t gain) during her pregnancy isn’t really my point, because isn’t anyone's damn business.

I Was "Starving Myself Skinny," And As A Result, I Was "Hurting Our Baby"

If I had a quarter for every time I was told I was told to “eat a hamburger” or just “have a sandwich,” I would have a whole hell of a lot of money. OK, not really. No one has ever said such absurd sh*t to me, but it was implied during my pregnancy that I wasn’t eating enough. People also made me feel like I might be hurting myself, or my daughter, by not having a third slice of pizza. And that implication felt awful. It was hard to hear, terrible to consider, and distressing. So very distressing.

According to the Mayo Clinic,there's no one-size-fits-all approach to pregnancy weight gain. How much weight you need to gain depends on various factors, including your pre-pregnancy weight and body mass index. On average, women with a BMI under 18.5 should aim to gain anywhere from 28 to 40 pounds, and a woman with a BMI of 30 or more should gain 11 to 20 pounds. Those with a BMI over 18.5, but under 30, should expect a 25 to 35 pound increase. However, these are just estimates, as every woman eats differently and every body carries a baby differently. In my own case, my OB-GYN advised me to gain less weight because I am petite with relatively narrow hips. So if I wanted the chance to deliver vaginally (which I did), my OB suggested a 20-pound weight gain.

How much weight a woman gains (or doesn’t gain) during her pregnancy isn’t really my point, because isn’t anyone's damn business. Weight gain is not an adequate indicator of how well you and your baby are doing. Some women gain 50 pounds and birth a 5-pound baby and others gain 20 pounds and birth an 8-pound baby. The scale isn't an accurate measure of health because every woman is different, every pregnancy is different, and every situation is different.

My value as a mother was never up to the determination of the size of my stomach, the width of my arms, or the thickness of my ankles. My health was not up to the consideration of some abstract number on a scale that said nothing about how I felt. And even though I questioned myself at the time — thanks to too many rude and hurtful comments — my abilities as a mother were never compromised by the runs I did or the foods I ate.

At the end of the day, my daughter was born healthy, and I have my body to thank for that.